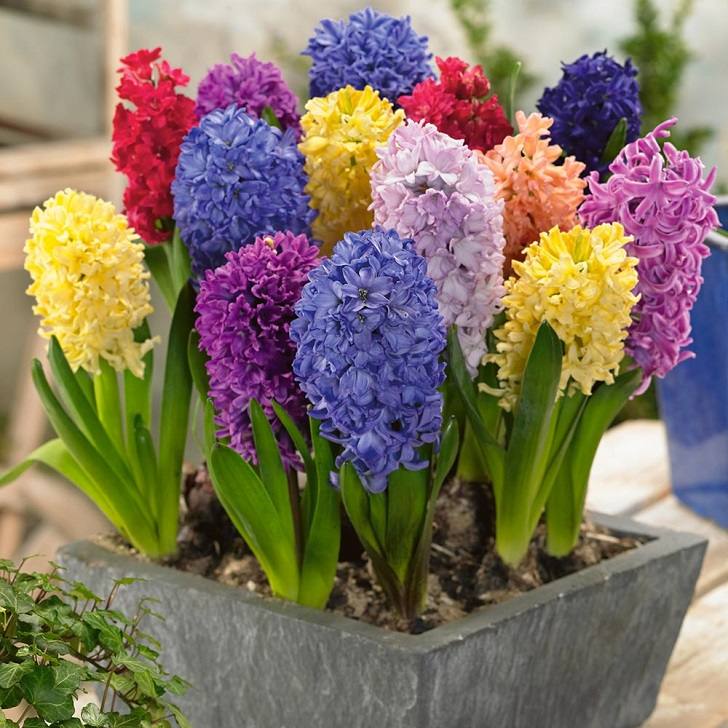 Hyacinth (Hyacinthus orientalis) is one of the most popular and loved fragrant flowering plants which can be grown both outdoors and indoors. These amazingly beautiful flowers are universal and unpretentious and will delight the eye not only on the flowerbed in the garden, but on the window sill at your house. Hyacinth comes in three varieties – single Hyacinths, double Hyacinths and multiflora Hyacinths. Thanks to the abundance of various shades, you can turn a window sill or a flower bed into a real multi-colored masterpiece.

Hyacinth refers to bulbous perennials. It is native to the eastern Mediterranean and there are many legends how the flower got its name. One of the legends tells the story of two of the gods, Apollo and Zephyr, who adored a handsome young Greek called Hyakinthos. Apollo was teaching Hyakinthos the art of throwing a discus. Zephyr, who was the god of the west wind, was overwhelmed with jealousy and he blew the discus back. It struck Hyakinthos on the head and killed him. From his blood grew a flower, which the sun god Apollo named after him. Another version for the name is that in ancient Greek Hyacinth means “rain flower” and this name is obviously related to its flowering during the spring rains.

It was the Turks who first began to grow hyacinths in the 15th century in the Sultan Gardens, and in the 16th century they were transported to Western Europe and the Netherlands became their second homeland. Nowadays bulbs are sold by many companies (mostly Dutch) and when choosing the particular variety, you should check the bulbs very well to see if they are damaged, dried or sick, and if you notice any sign like that, you should not buy them.

Hyacinth blossoms from March to April in a stunning variety of shades – white, blue, purple, pink and even such rare colors options, like black and burgundy. Another undoubted advantage of this flower is a perennial and, with proper care, it will please you more than one season. The period of its flowering is different depending on the type of hyacinth. The blue varieties are the ones that blossom earliest followed by snow-white, pink-red and purple flowers and finally orange and yellow varieties. Keep in mind that Hyacinth bulbs are poisonous as they contain oxalic acid and may cause skin irritation. It is recommended to wear protective gloves when handling the bulbs.

How to grow Hyacinth in the garden? 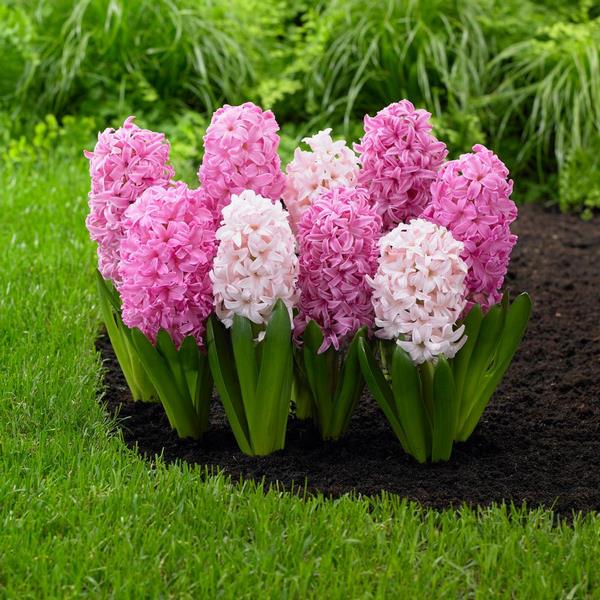 Nowadays there are over 300 Hyacinth varieties which were created in the 15th century. The flower does not need any special care and is quite resistant to the frequent temperature differences in the early spring. In good conditions it reaches a height up to 35 centimeters. The flower thrives on sunny places but can also be planted around trees and shrubs. Direct sunlight should be avoided. The soil must be fertile, rich in humus and well drained.

If you want to have a beautiful garden in March, you have to plant the bulbs in the second half of October or beginning of November. You can plant the bulbs in rows in your flower beds or in different parts of the garden. It is important, however, to know that the bulbs of the hyacinth are quite large and when planting them you must keep a distance of about 10 cm from each other and a depth of about 12 cm. Once planted, you need to often water them and keep the soil moist. After blossoming, the leaves are best left to yellow and die naturally. In this way, bulbs accumulate the most nutrients needed for the next flowering. 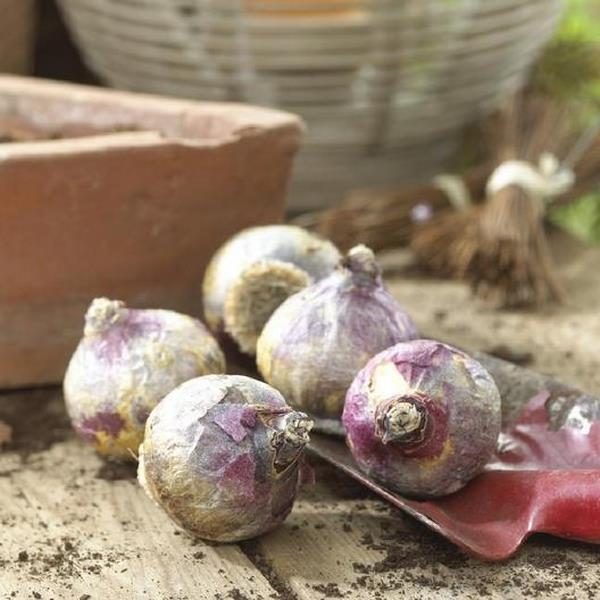 The propagation of the hyacinth is like all other garden flowers. After the first flowering, two or more sleeping buds can develop from one bulb. Subsequently, separate plants appear, which then form independent bulbs. Separation takes place during the rest period (in the summer). You do not need to take out the bulbs from the soil as hyacinth is a perennial plant, but experts advise to remove bulbs after flowering and planting them elsewhere. If for some reason we have to remove them, for example, to free the bed for other flowers, this happens early in the summer. If you lightly cut a cross at the bottom of the old bulb on before planting it, the effect will be overwhelming. If you took the bulbs out, make sure you store them in a warm, airy place until planting. Hyacinths are hardly ill, but they can suffer from the naked snails that eat their leaves. Problems may occur during storage. If you notice any signs of rotting do not mix damaged and injured bulbs with healthy ones but throw them away.

How to grow Hyacinth indoors? 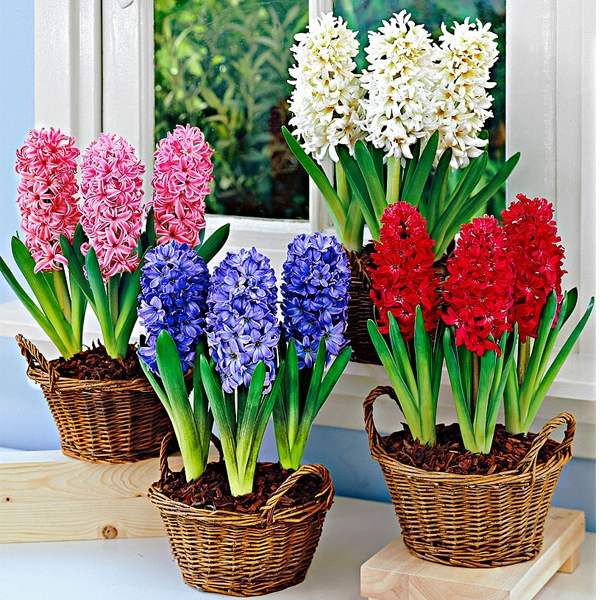 Hyacinth is not only a garden flower, but also a beautiful houseplant. If you decide to plant hyacinth at home, for example, on the windowsill, you need to follow some basic rules and guidelines. Like for every houseplant you need to provide the best conditions – light, water, temperature, soil.

First, the pot must be prepared for planting. To do this, put a drainage level on its bottom. Then it should be covered with a couple of centimeters of sand and only then the pot should be filled with soil mixture to the edge.

Planting hyacinth is somewhat different from planting other bulbous plants, so be careful. Gently press the bulbs into the soil with the pointed end facing up. One third of the bulb should be above the soil so make sure the tips of the bulbs are visible. In case you have a long large pot, into which you want to plant several hyacinths, then you should observe the distance between the bulbs. Water each pot of bulbs thoroughly as the bulbs must remain moist to grow correctly.

When you have planted the bulbs, it is best to keep the containers in a dark place below 50 F. (10 C).

Cover the pots with paper or black plastic bags to keep them from the light. In the spring, start gradually exposing the containers to natural light. After a few weeks, the bulbs should have produced 3-5 shoots and you can move the containers to full sun to let them bloom.

How to grow hyacinths in water? 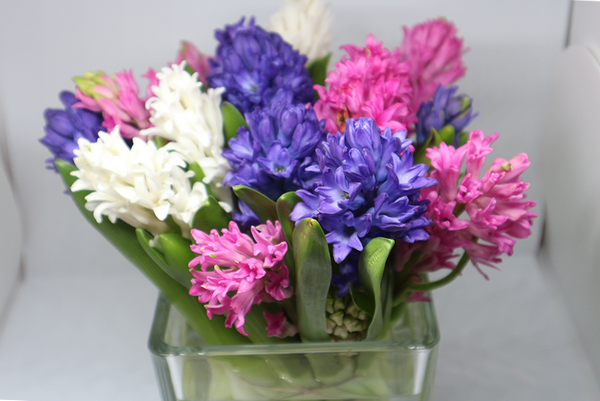 You need to place the bulb on place, again, with the pointed end facing upwards. Fill the vase with water. Make sure that the water level is about 1 cm from the bottom of the bulb. If you let your bulbs sit in water, they will rot.  Keep the vase in a cool and dark area for about 12-13 weeks and when the roots are formed and the yellow shoots reach height of 8-10 cm, you can start exposing the vase to medium light. When the shoots turn green, place the vase in a brightly lit area but avoid direct sunlight. Replace water while the flower is blooming. To prevent rotting, drop a small piece of charcoal into the water. 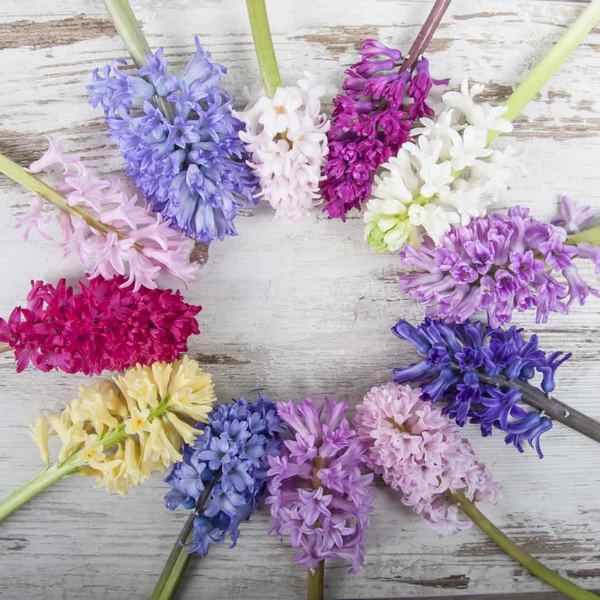 Hyacinth flower is among the most spectacular and beautiful spring flowers and it may be interesting for you to discover some curious facts as well as the different meanings.

For example, each flower color has a unique fragrance which makes this plant one of the most widely used in perfume making. We already mentioned that the bulbs are poisonous. The oxalic acid is so strong that it can remove rust. The juice of the hyacinth plant is naturally sticky and hundreds of years ago it was used as glue.

In the language of flowers blue Hyacinth means sincerity while yellow stands for jealousy. White means loveliness or prayers for someone and purple symbolizes deep regret or asking for forgiveness. In Victorian times Hyacinth represented constancy, play or sport or engagement in sport. 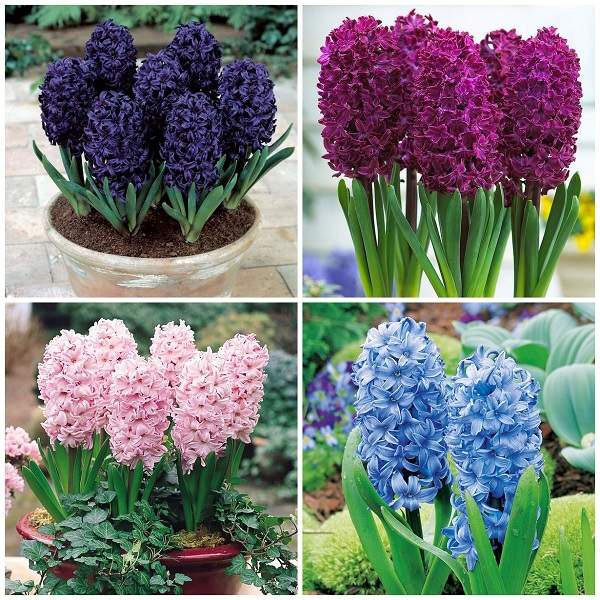 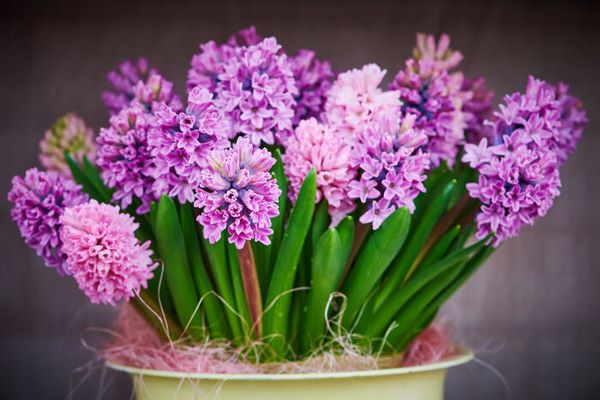 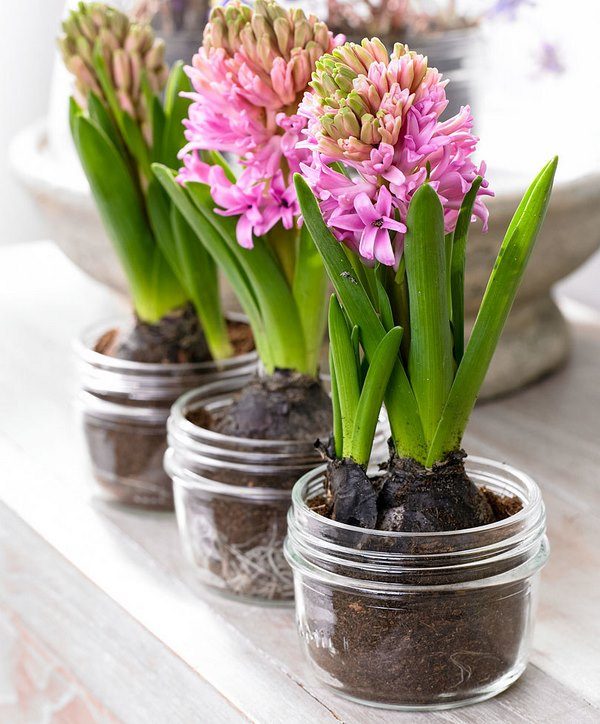 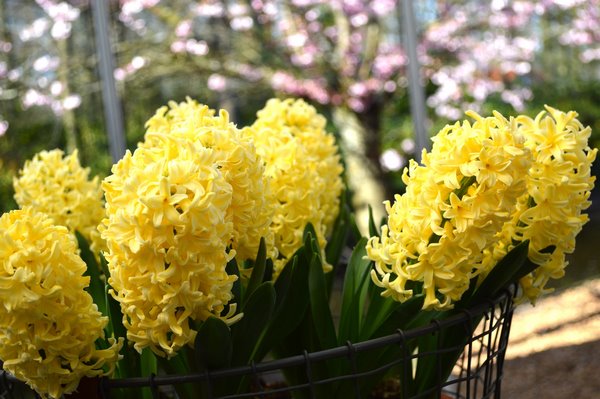 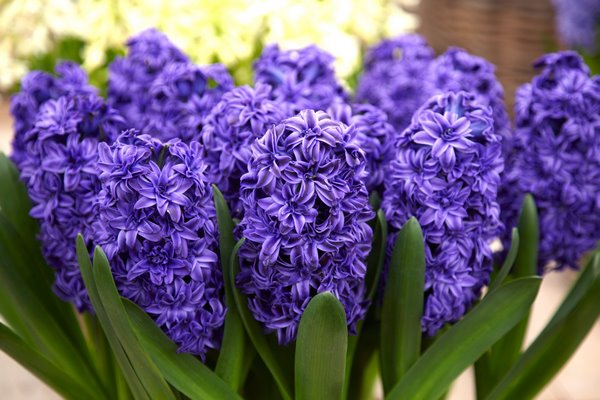 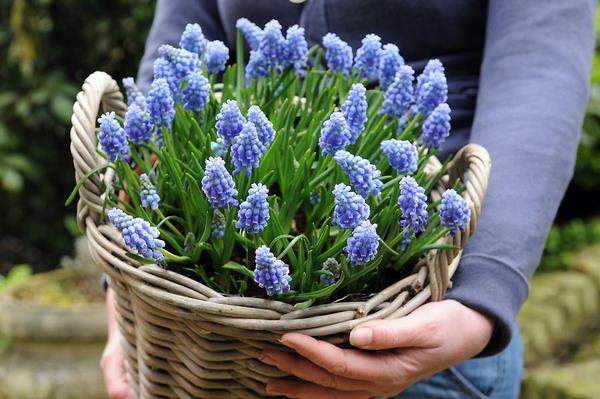 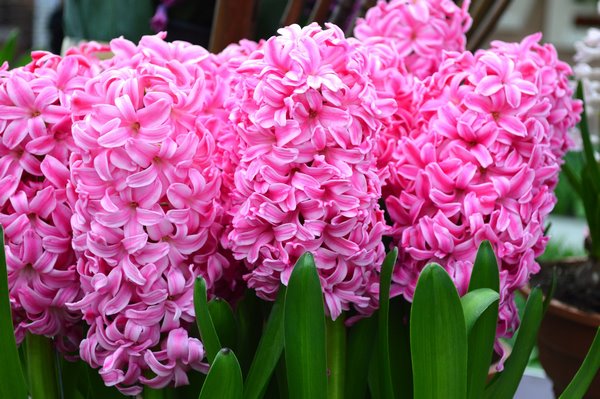 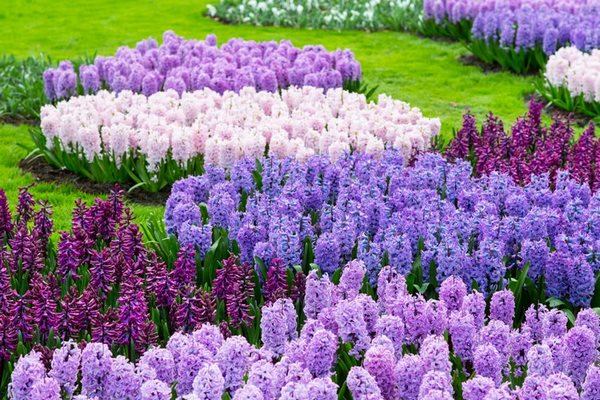 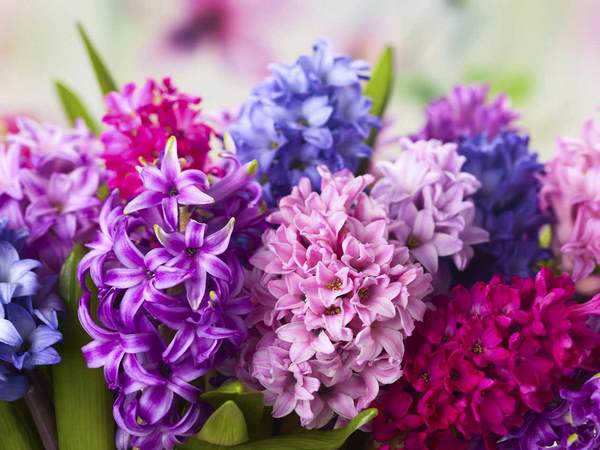 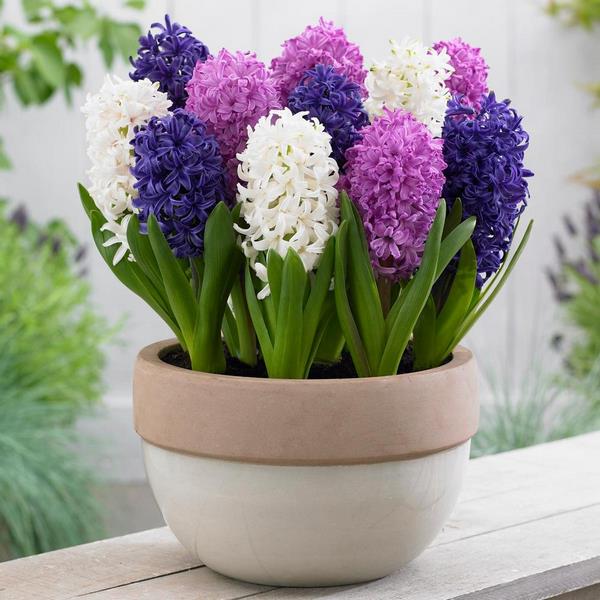 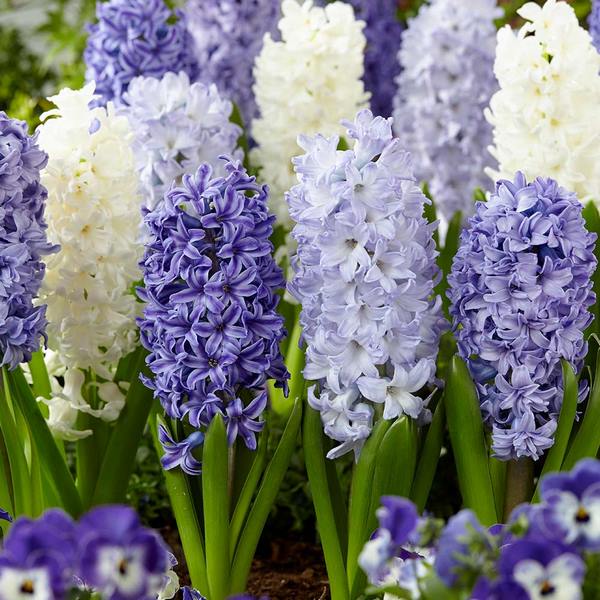 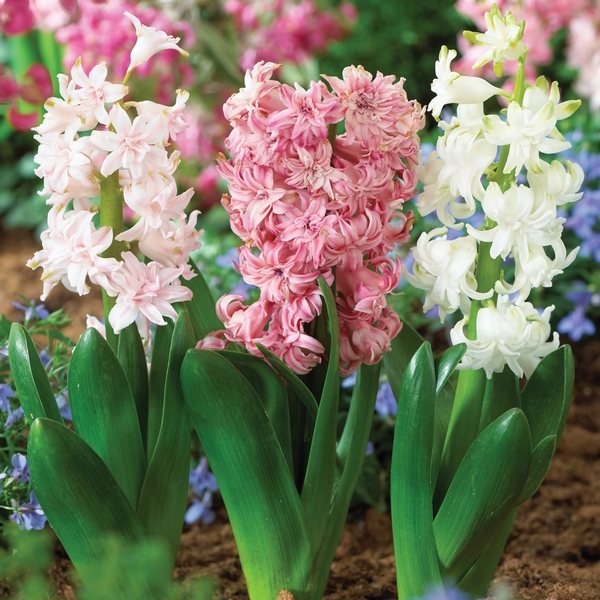 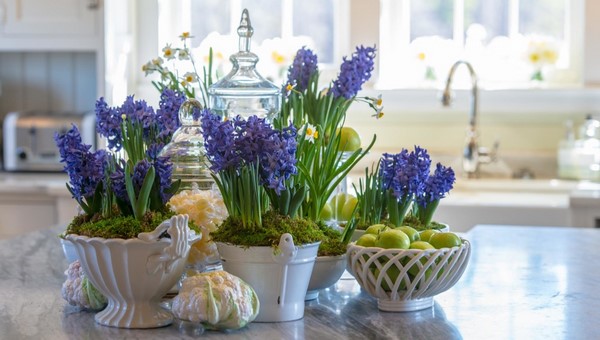 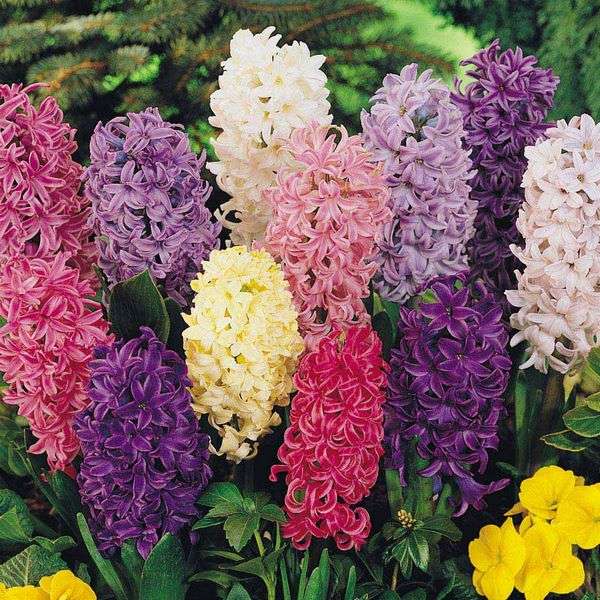 What do you need to know about the mysteriously beautiful Moonflower?

What do you need to know about the mysteriously beautiful Moonflower?
Next article 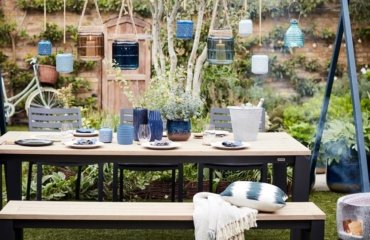 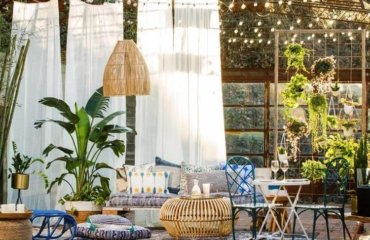 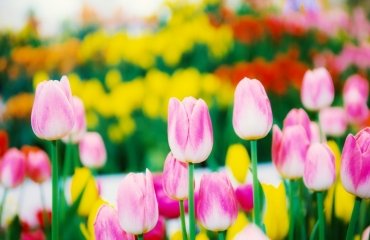 How to grow tulips – fantastic spring flowers in your garden 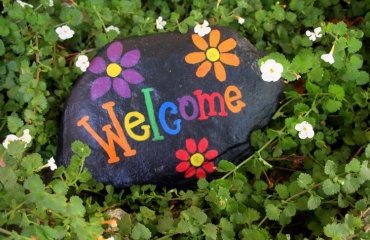 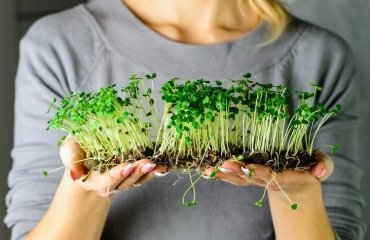 How to grow microgreens at home: a small garden in your own kitchen! 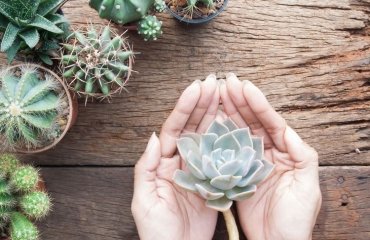 How to care for succulents at home – tips for beginner gardeners