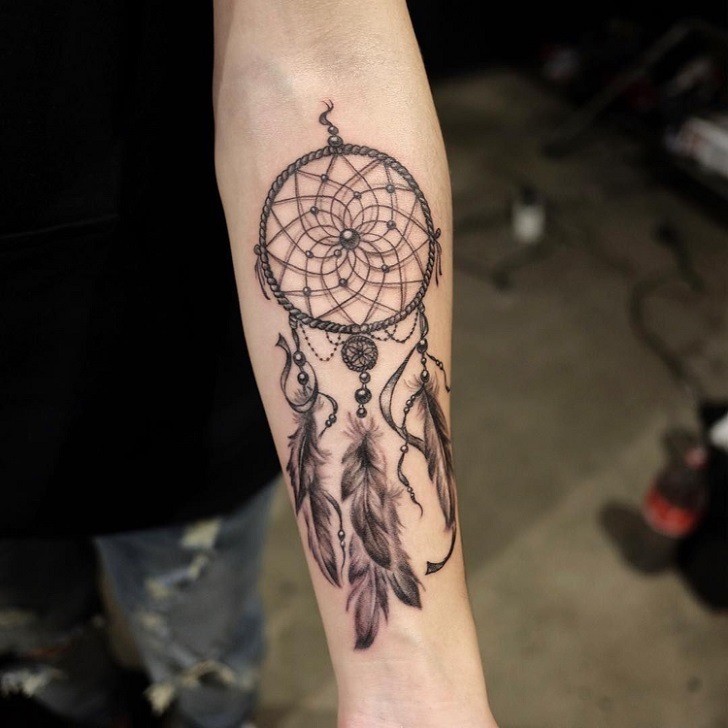 The symbol of the dreamcatcher is a famous talisman and a strong Indian amulet which combines beauty and sacral value. It consists of a web, placed in a hoop and feathers tied to it. Sometimes in the web wooden beads are plaited, vine branches and other traditional Indian symbols. The number of feathers can vary from one to three and they are also often decorated and painted in different colors. We will show you a variety of dreamcatcher tattoo designs for men and women and explain the meaning of the elements.

It is believed that the tribe of Ojibwe was the first one where this amulet appeared. Native Americans believed that a mystical and maternal “Spider Woman” protects the tribe and especially young children, kids and babies. When the tribe grew and spread, it was difficult for the Spider woman to protect people and she created the dreamcatcher which helped her protecting the members of the tribe from afar. With time the women of the tribe created their own unique amulet, personifying a spider woman as a mean of protection. Initially, the amulet was made only of natural materials – willow branches and covered in stretched deer sinews, but with time it became more decorative rather than protective, although there are still people who really believe in its positive power. 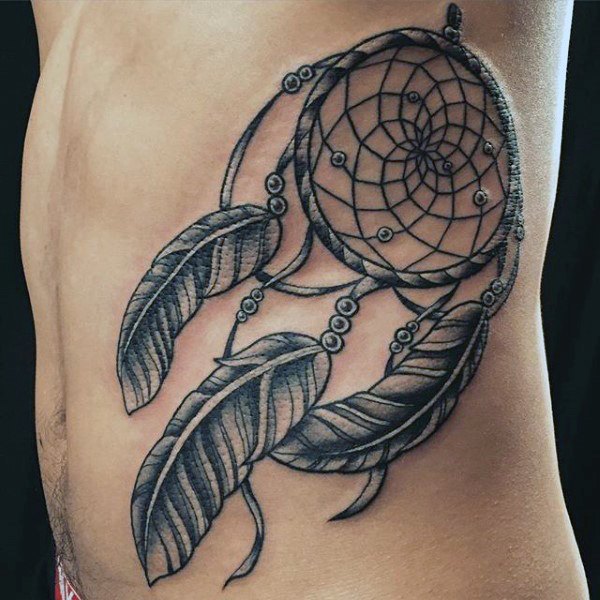 Dreamcatchers were used to protect sleeping people, especially children, form bad dreams which get caught in the web while good dreams pass through. At the very beginning, the feathers of the amulet were used to entertain the newborns, but they have a much deeper meaning. Feathers of birds symbolize breathing and air, which in turn are symbols of life. The waving of feathers, according to the Indians, suggests that a good sleep has come to man. Feathers of owls are used to create a female amulet, meaning wisdom while for the male version, eagle feathers were used as a symbol of strength and courage and it was believed that every movement of the feathers announces the arrival and departure of a new beautiful and peaceful dream. In some tribes, the Indians made the amulet with eight points of contact of the hoop as was believed that in this way the amulet is like a spider with eight legs. A precious stone integrated into the amulet symbolized man’s life path and four stones symbolized protection from every direction – North, South, West and East. 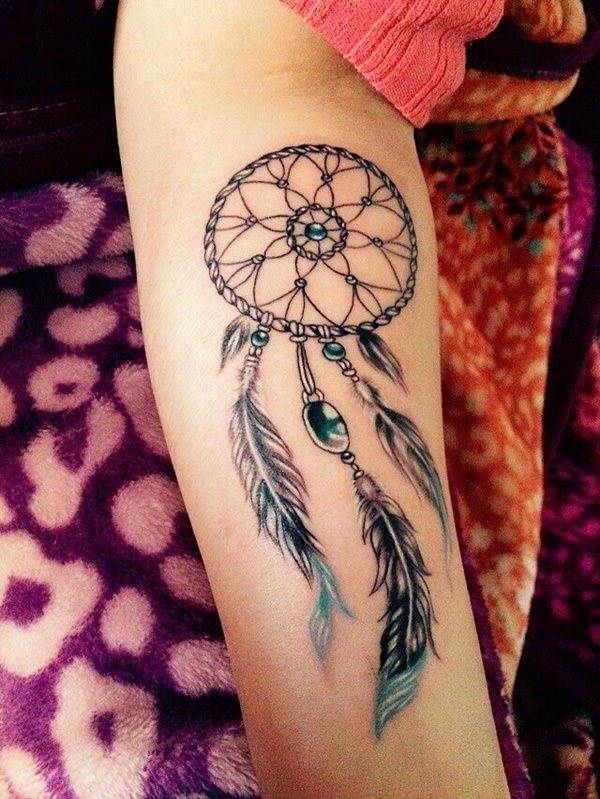 In ancient tribes there were many amulets and the dreamcatcher is one of the most popular ones among modern people not only as a talisman but as a tattoo as well. Usually a dreamcatcher tattoo is the choice of young girls and women, but many men also choose this image, sometimes as a part of a larger design.

Despite the fact that the amulet consists of a hoop, threads and feathers, the ideas for designing a tattoo can vary depending on each individual. Some people choose the tattoo as a protection from evil eye and negative energy, others believe that it helps for the peaceful and pleasant sleep and some show their respect and devotion to ancient traditions. It is true that nowadays it is not necessary to follow all the rules and traditions of the Indian tribes. Many people choose tattoo designs as a fashion trend and add elements that have a personal meaning. However, before you choose the design of your dreamcatcher tattoo you need to understand the meaning of its elements and it is a good idea to discuss your ideas with the artist in advance. The great news is that this tattoo provides numerous opportunities for creative designs as there are no two amulets alike and you can personalize the image by adding a variety of elements. 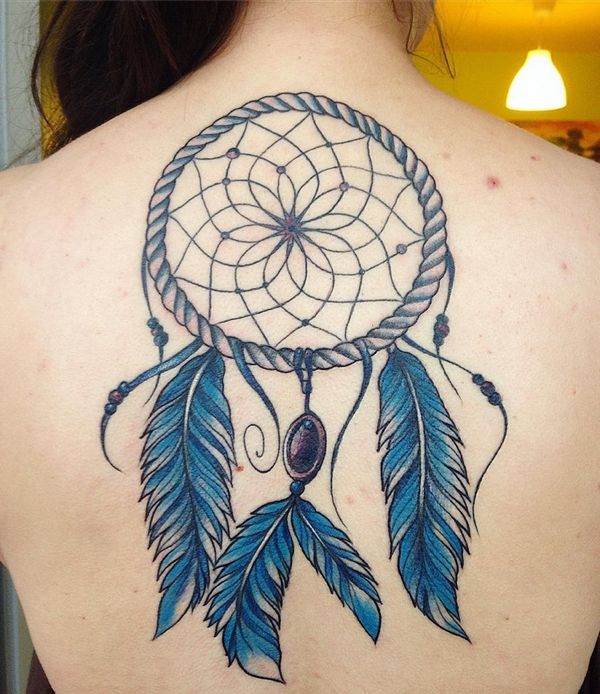 Colors also have their special meaning and you can choose either a simple black design or add colors.

The meaning of a dreamcatcher tattoo does not lose its essence through the ages and centuries and can be generally explained as an amulet which catches all negative thoughts and dreams, leaving only the good and positive ones and thus allows a person to enjoy a calm and sound sleep. Due to the immense defensive power of the dreamcatcher, evil spirits and negative energy are trapped in the web and cannot come near man. Some designs add images of totemic animals – a bear and a wolf – in the center of the hoop. Some modern interpretations of the meaning include man’s desire for spiritual experience and knowledge of the inner self.

What is the best location for your dreamcatcher tattoo? 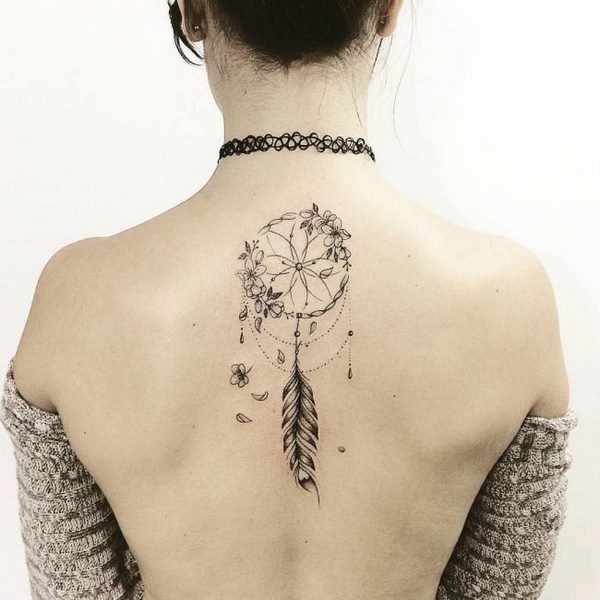 Once you have chosen your dreamcatcher tattoo, it is important to think for the location of the image. The tattoo can be done on absolutely any part of the body but if you believe that the amulet will protect you, you should choose a body that is close to the head, for example, the neck, collarbone or shoulder. Of course, the location will depend on the size of the image as well. Whether you want your tattoo to be visible at all times or not is also a consideration to keep in mind. If you want to demonstrate your tattoo you can choose arm, leg, upper arm and forearm but if you wish to conceal it, place the image on the shoulder, neck, thigh, back, ribs. A dreamcatcher tattoo on the shoulder or on the back is a powerful protection against bad thoughts and emotions and indicates a desire for freedom. An image on the wrist looks very feminine and sensual. A dreamcatcher tattoo on the neck protects the person from the daily problems and helps in difficult situations. 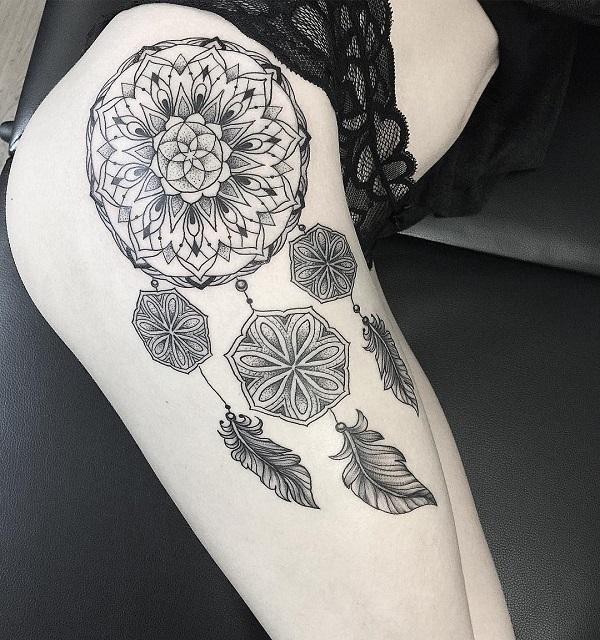 You may have heard that all dreamcatcher tattoos look the same, but this is not true and you will see some great designs and ideas in the gallery below suitable for men and women. Look carefully at the photos and think of the elements that you want for your tattoo because it is not impossible, but very difficult to change the design once the image is inked into the skin. After all, like any other tattoo, the image of a dreamcatcher should reflect your personality and give you pleasure, right? It could be a good idea to make a temporary henna tattoo and see how the image looks on your body and whether you chose a suitable location. This will allow you to change the design, the size, even the style of the tattoo. Henna is a good option for everyone who is not ready for a real tattoo and the pain because you can have different images every time.

Dreamcatcher tattoo design ideas for women are often delicate and include images and elements that emphasize femininity – rosebuds, blooming roses, flowers, hearts, birds, wings, etc. For example, a flying bird carrying an amulet in its beak looks very impressive and is one of the designs that enjoys a great popularity among women. Owls, as a symbol of wisdom, are also popular elements as well as horseshoes as lucky charms. 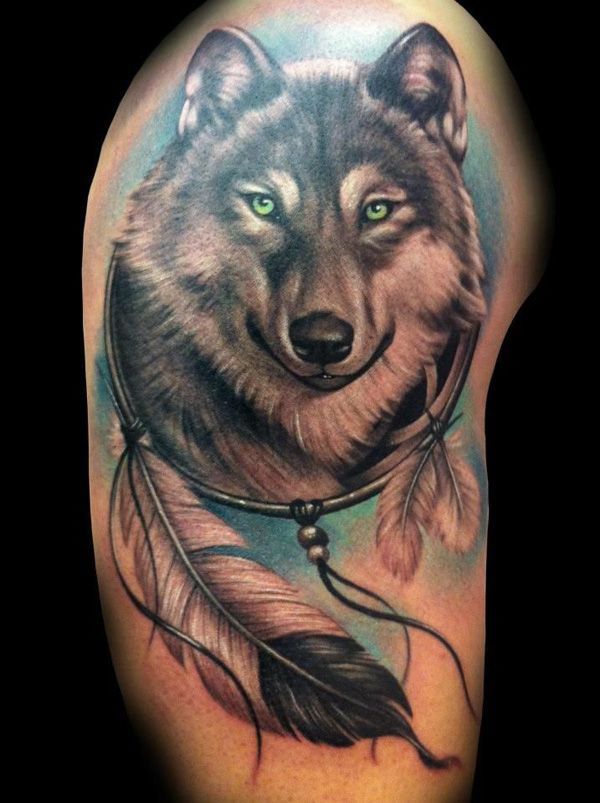 Dreamcatcher tattoo design ideas for men can be simple, based on the main elements or include motifs that emphasize man’s power, strength and courage. Paw prints or drawings of animals such as deer, bear or wolves, lion, tiger, dragon, etc.

As far as tattoo style is concerned, it will depend on your personal preferences. In almost every studio you will see great examples in a variety of styles – from the classic old school to Trash Polka and watercolor or blackwork. Each style has its own rules, techniques and colors. For example Trash polka tattoos are designed in black and red while watercolor style gives an opportunity to create real works of art.

Enjoy the gallery and choose the style and design of your dreamcatcher tattoo! 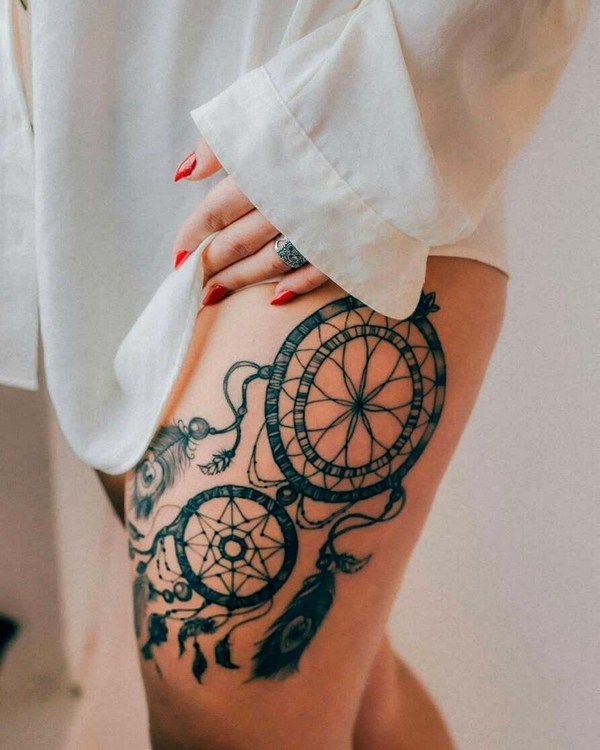 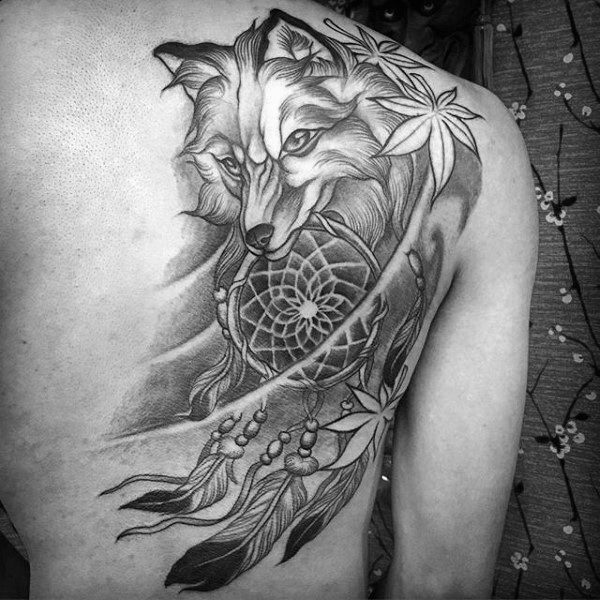 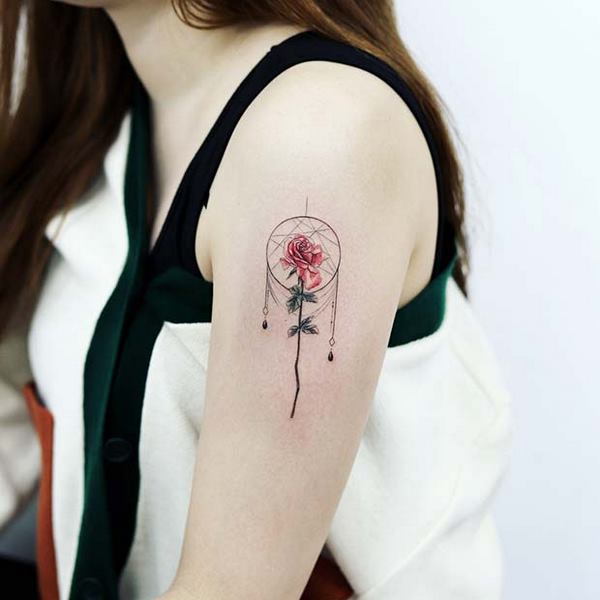 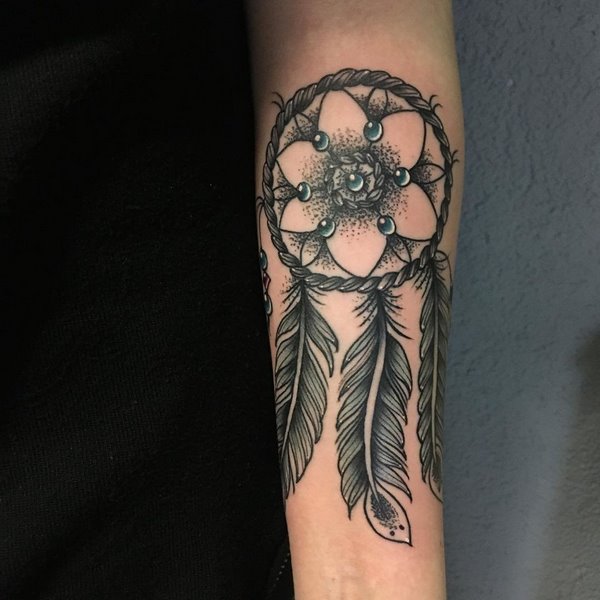 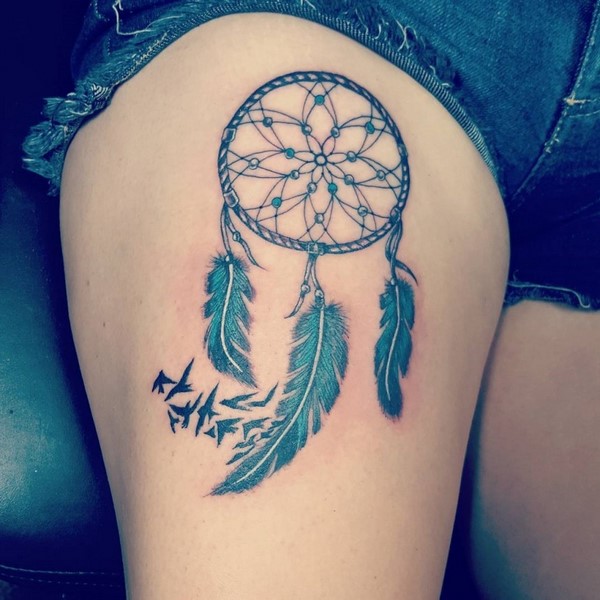 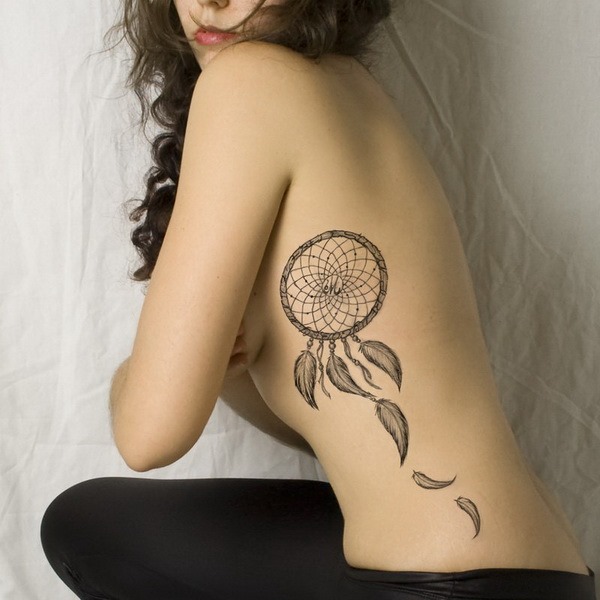 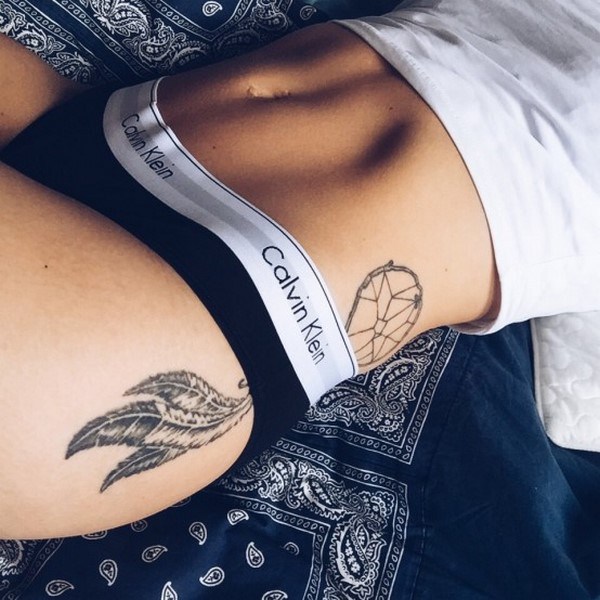 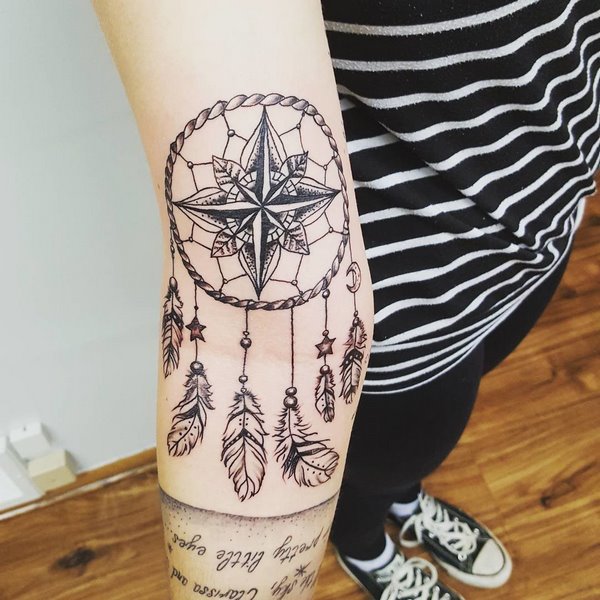 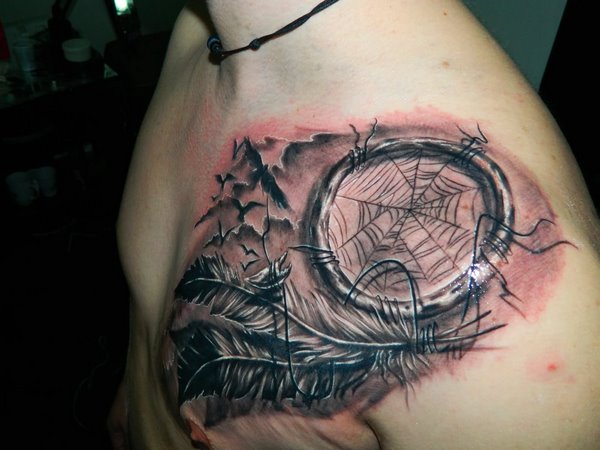 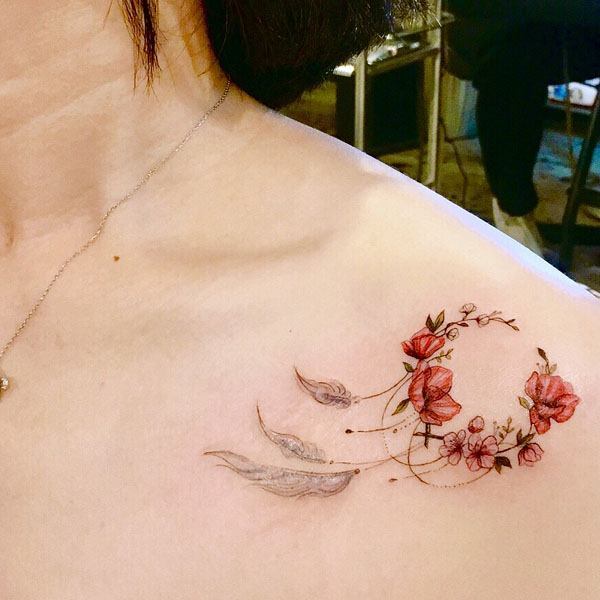 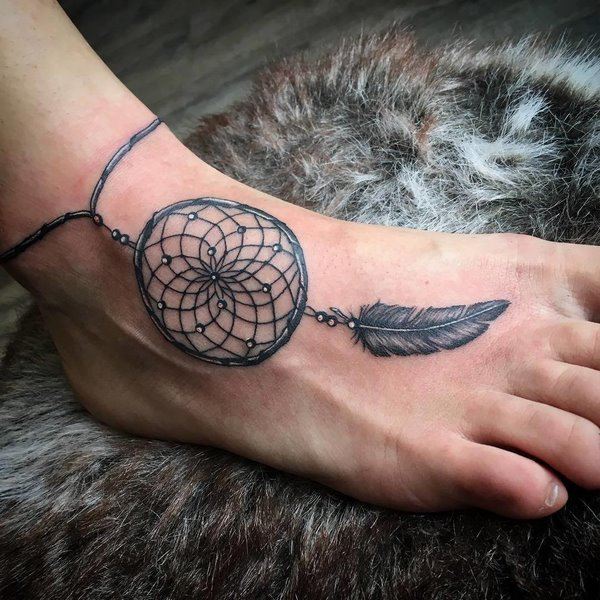 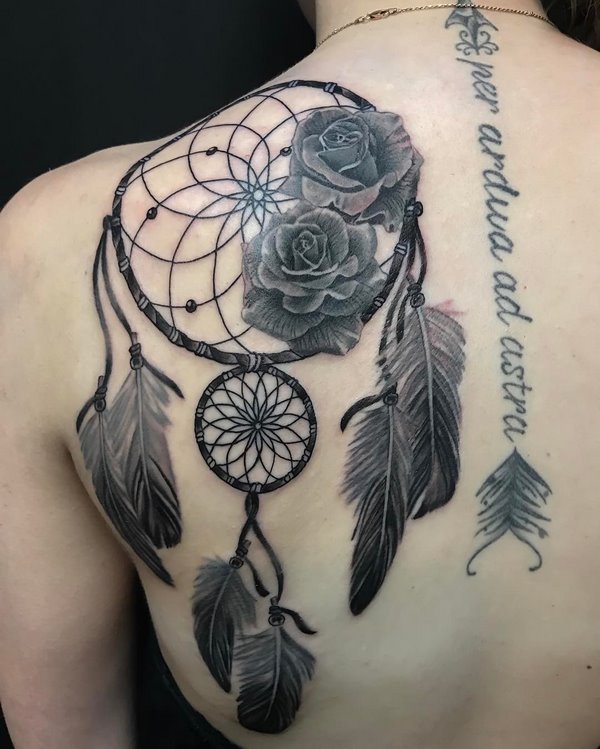 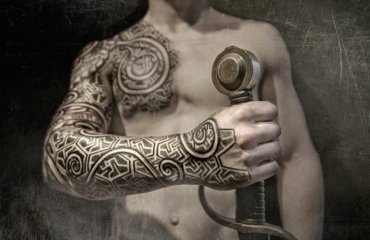