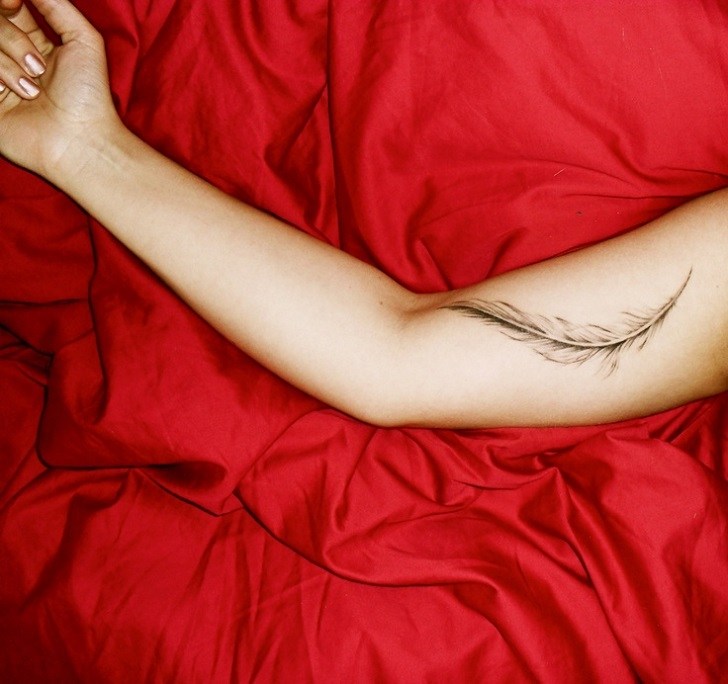 A feather tattoo has a variety of meanings that depend on the type of image. The meaning of the tattoo also depends on the style and technique as well as the bird species that the feather belongs to – it can be a traditional Indian design, or feathers of a peacock, a crane, an eagle, etc. Since these tattoos can have a variety of meanings we shall give you a detailed explanation below. Despite the fact that nowadays it is most often the choice of women compositions with feathers are a perfect choice for men too. 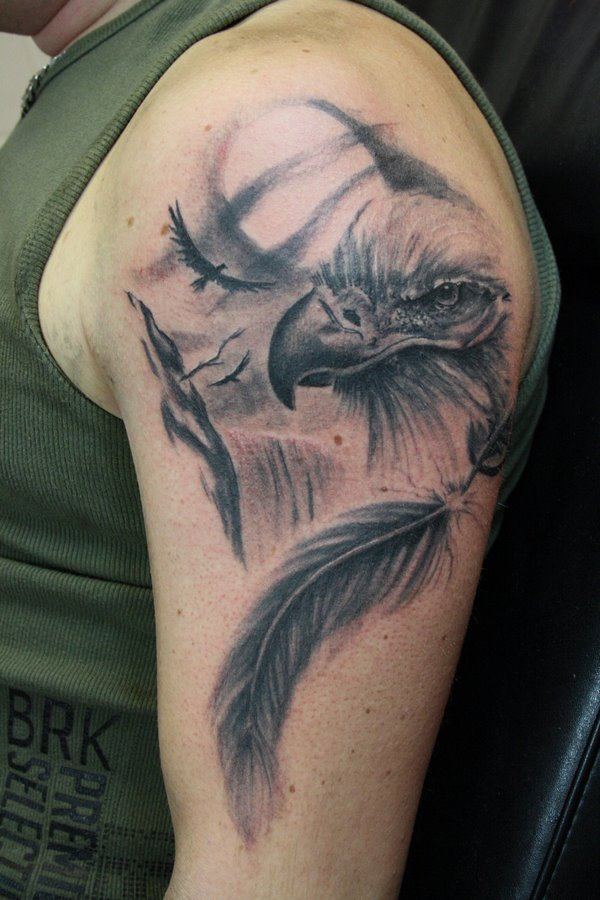 The very first tattoos with feathers appeared among representatives of ancient Indian tribes living on the territory of America. These tattoos ware allowed to only chosen people, who had the respect of the tribe – the leaders, elders, healers, shamans and outstanding warriors. The feather was a symbol of revival of life and immortality and it was believed that it helped men to establish a close connection with the gods and gave him the opportunity to communicate with them. Indian warriors often used eagle feathers in their native tattoos so that all the strength, power, courage and nobility of this bird passed to the person. 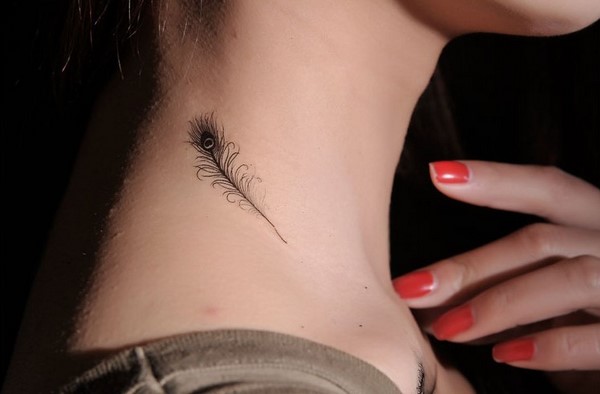 It is mistakenly believed that feather tattoos were not popular in other places. The ancient Eastern countries and Greece often used this symbol embodying in it a meaning of beauty and power of its owner. In Greece, a peacock feather tattoo was very important because it was a sign of high rank in society and symbolized beauty, prosperity and nobility. Ancient Egyptians considered feathers a symbol and a connection with the heavenly gods, Buddhists gave peacock feathers a different meaning – in their belief they were associated with attention, alertness and compassion and even ancient Christians did not ignore the symbolism of a feather – to them it was associated with rebirth and renewal and the symbol of the three feathers was usually depicted on the rings of the highest clergymen symbolizing mercy, virtue, faith, etc. Even nowadays the importance of a peacock feather as an embodiment of cyclic recurrence and renewal is widespread, as this bird changes its appearance over time. 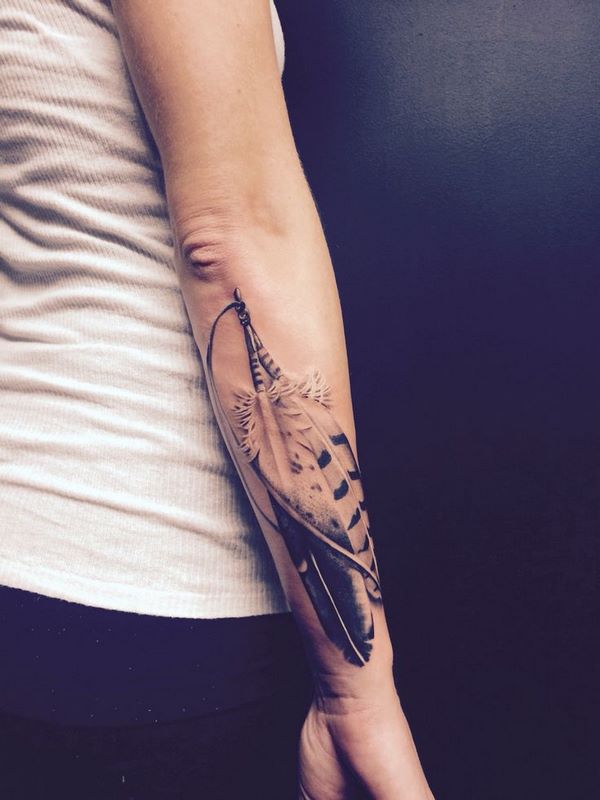 In some cultures, feathers personified those who passed away. According to the beliefs, if a feather falls in front of a person, it is a sign that someone he knew just died. Many cultures associate the feather with dreams. It is light and small, so it moves freely by the wind blow. It was believed that if you saw a white feather in your dream, it is a sign of a new spiritual period in your life. Red feather symbolize passion and love. Yellow or orange feather most often are a sign of unique mental abilities.

Understanding the meaning of feather tattoo 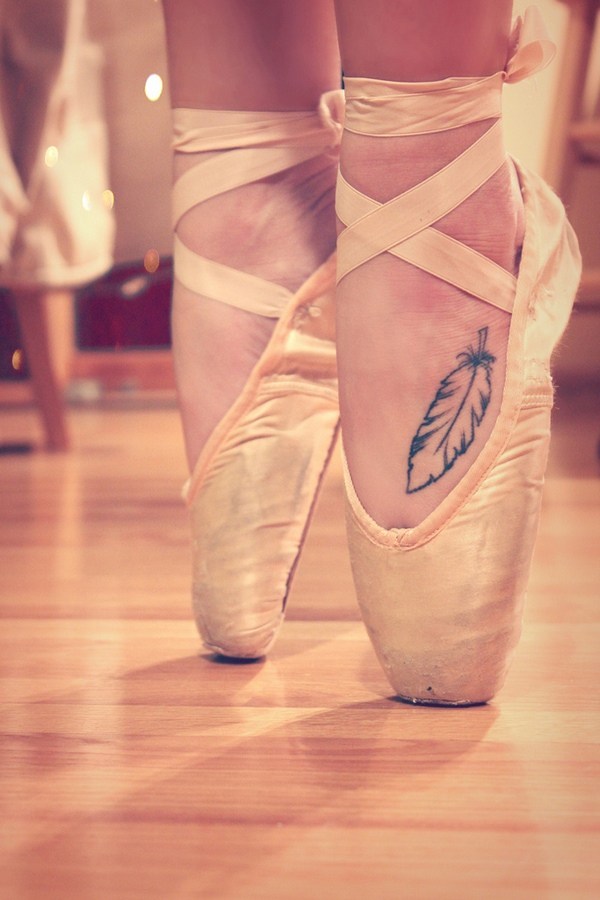 The meaning of the tattoo can vary greatly depending on what kind of bird it belongs to, and also on the desires of the person himself. As a rule, only one feather is chosen for a tattoo. The most popular tattoo designs for men and women include feathers of peacock, crane, phoenix, owl, swallow, eagle, symbols and bird motifs. Each bird has its own character and behavior as well as meaning.

A feather tattoo is suitable for various body parts and is chosen not only for its aesthetic appearance, but also for the many hidden meanings. Images come in various sizes and designs – it can be a large eagle feather on the shoulder or an elegant tiny design on the wrist, foot or ankle. In addition to the main interpretation, there are several other equally important meanings.

Nowadays all tattoos with feathers can be divided into two styles: traditional and modern. The traditional style is suitable for men as it has not changed its original meaning since ancient times and carries the idea of strength, courage, will, determination, masculinity – the qualities of an outstanding warrior. Most often such tattoos are made in monochrome black.

Modernized interpretations are usually chosen by women because of the apparent lightness and weightlessness and are designed as a tender and delicate image symbolizing freedom, attitude to life, creativity, etc. Beautiful and graceful feathers of different birds will be an excellent motif for a female tattoo. Such tattoos will emphasize the tenderness, lightness and beauty of the woman.

A floating feather speaks of sadness and separation. A torn or damaged feather is a sign of trauma, pain or loss, a defeat or loss of hope.

The burning feather of the mythological phoenix bird is another popular tattoo and is used to express immortality, rebirth, the beginning of a new life and the cyclic existence.

The peacock was considered as a wise bird and in modern times a peacock feather is a sign of beauty, wealth and love. These tattoos are most often the choice of girls and are usually performed in color.

The tattoo is also a symbol of rebirth, of new life and connection with the spirits of ancestors, of family ties, etc.

The most popular meanings of feather tattoos: 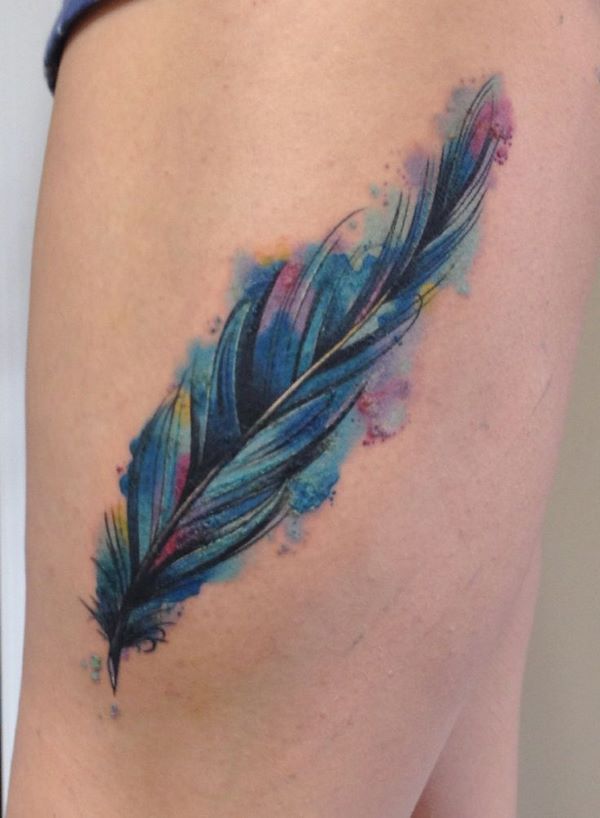 When you choose a design for your tattoo you need to consider not only the size, the bird species and the style but the color as well. Colors will change the meaning of tattoos so you need to think of what you want to express and the particular symbolism of the design. Many people prefer black and grey tattoo design, but green, yellow, blue are also popular choices.

Red feathers are a symbol of victory and passion. Green-blue colors represent calmness, peace, stability while purple tones are a symbol of extravagance. Yellow and orange colors bring comfort and warmth.

Thanks to the variety of feather tattoo designs, you can easily select exactly the image that meets all your requirements for style, composition, color, additional elements like inscriptions, patterns, objects and create the perfect tattoo. 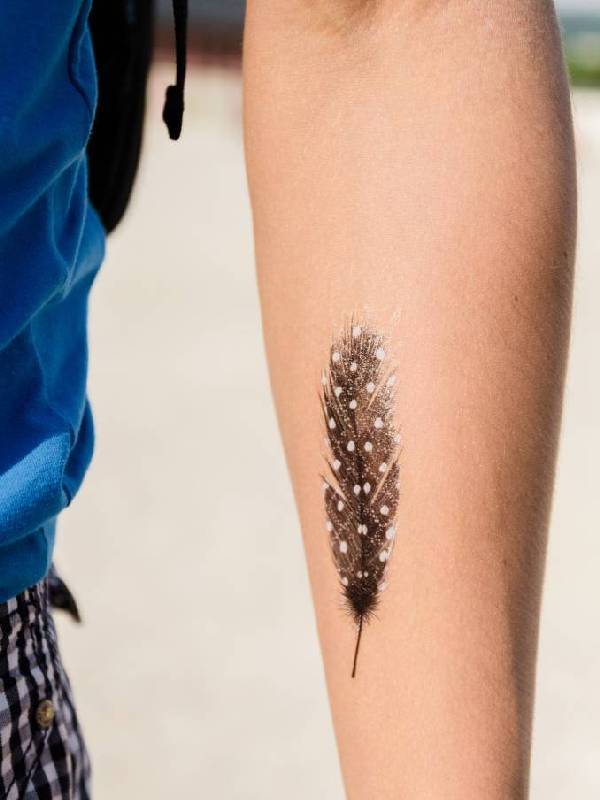 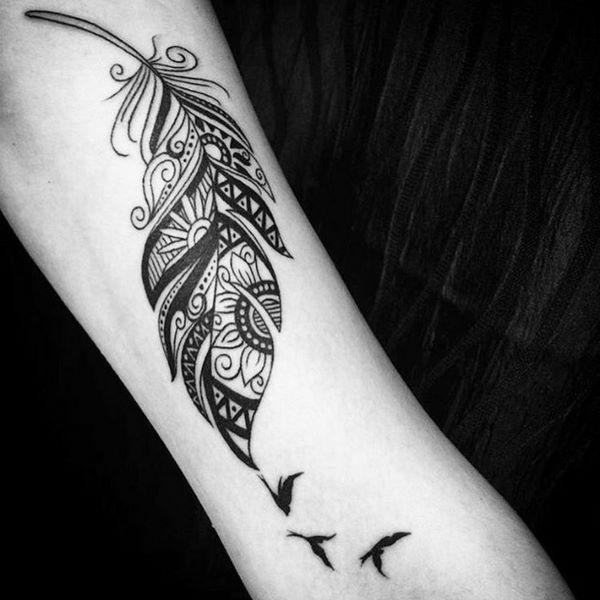 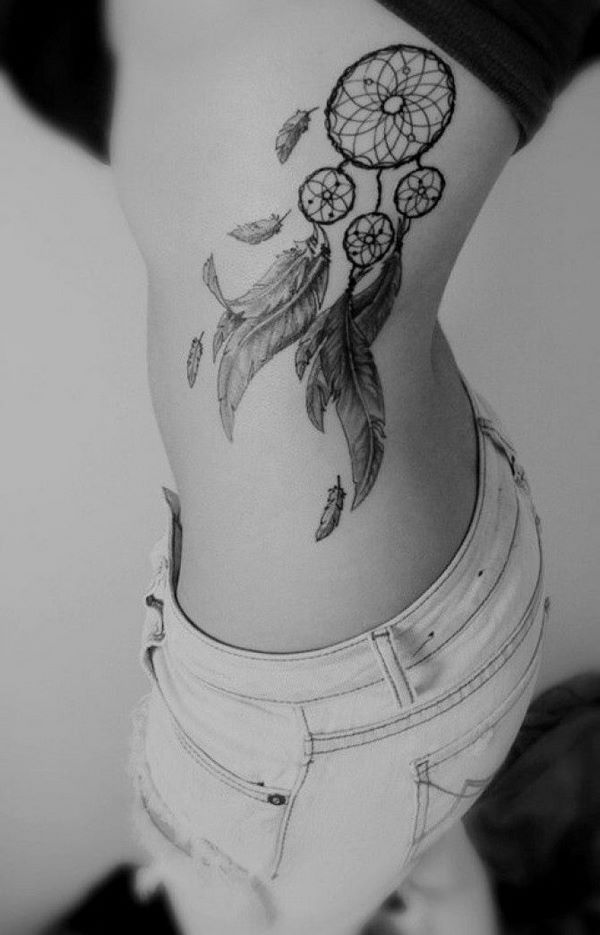 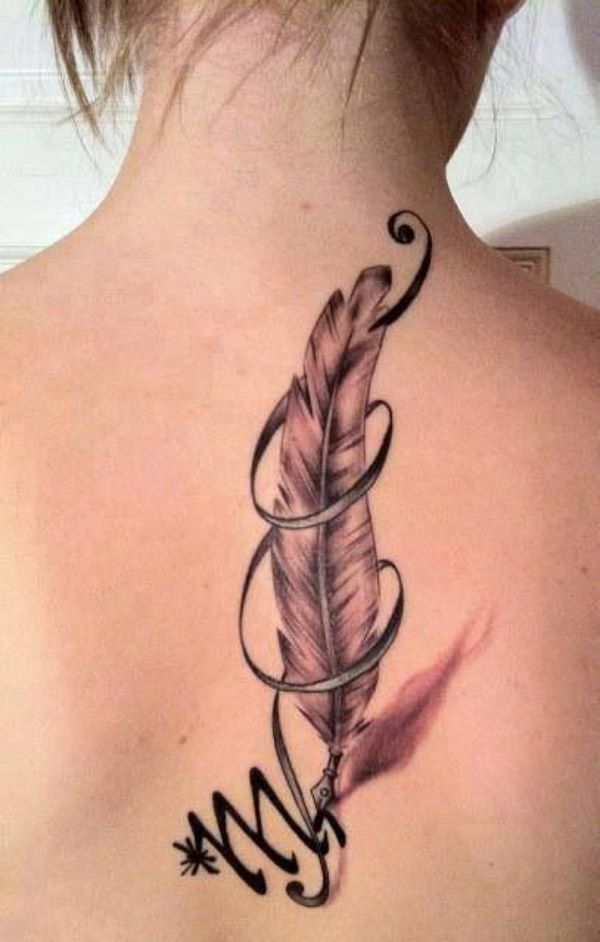 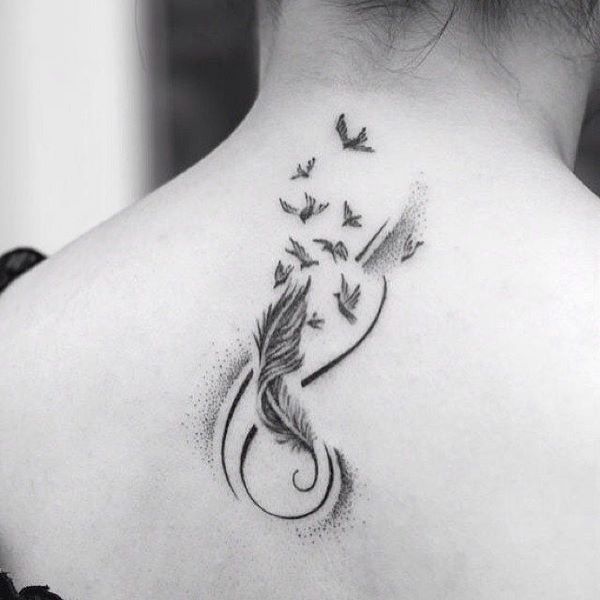 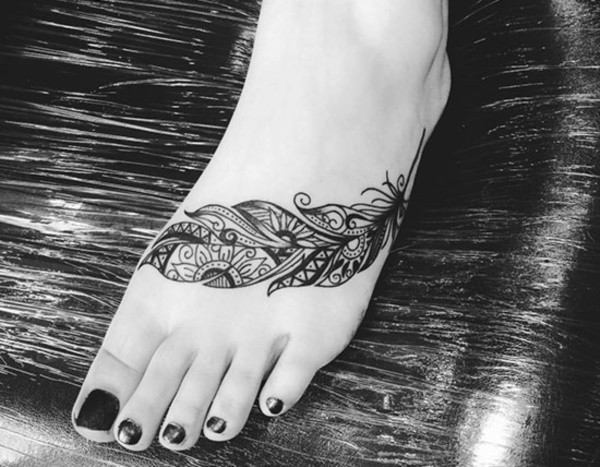 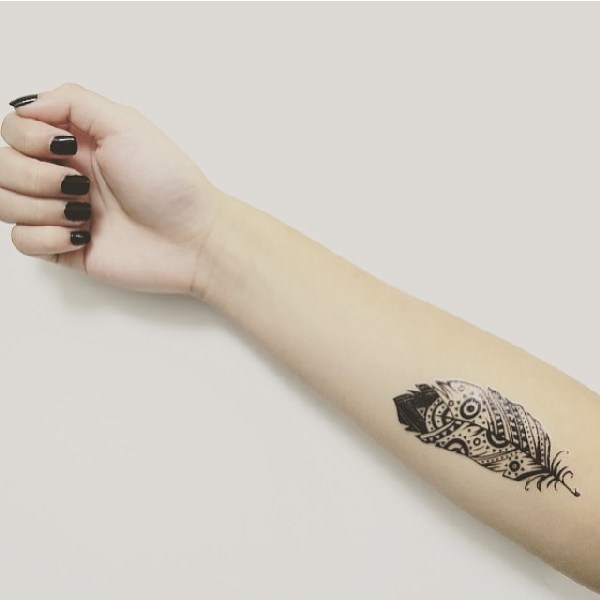 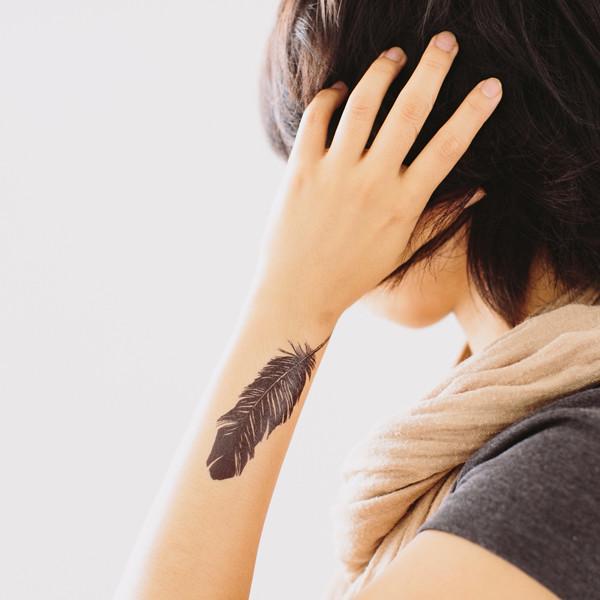 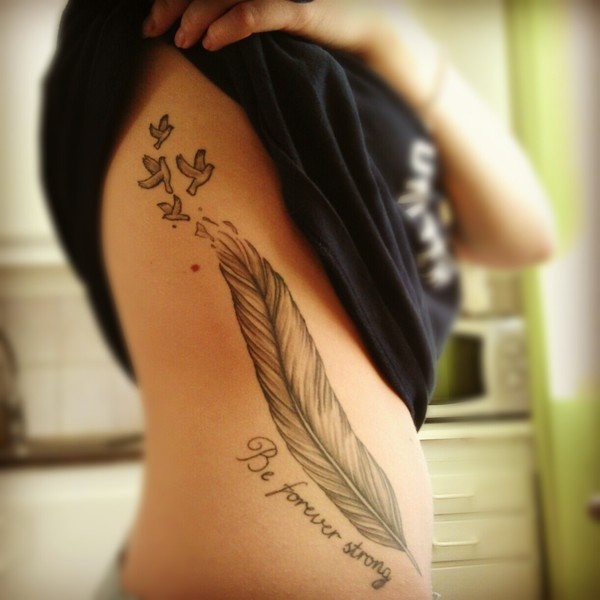 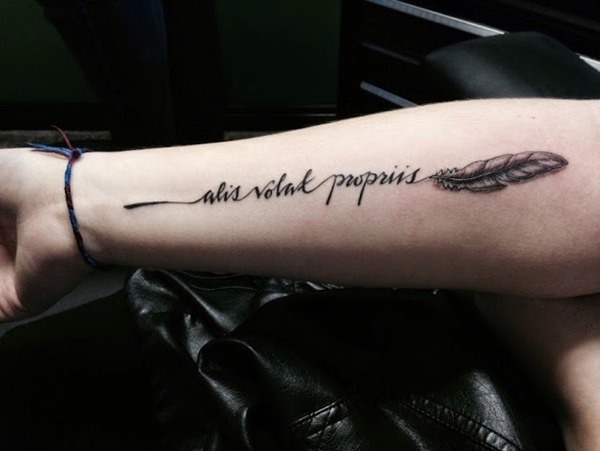