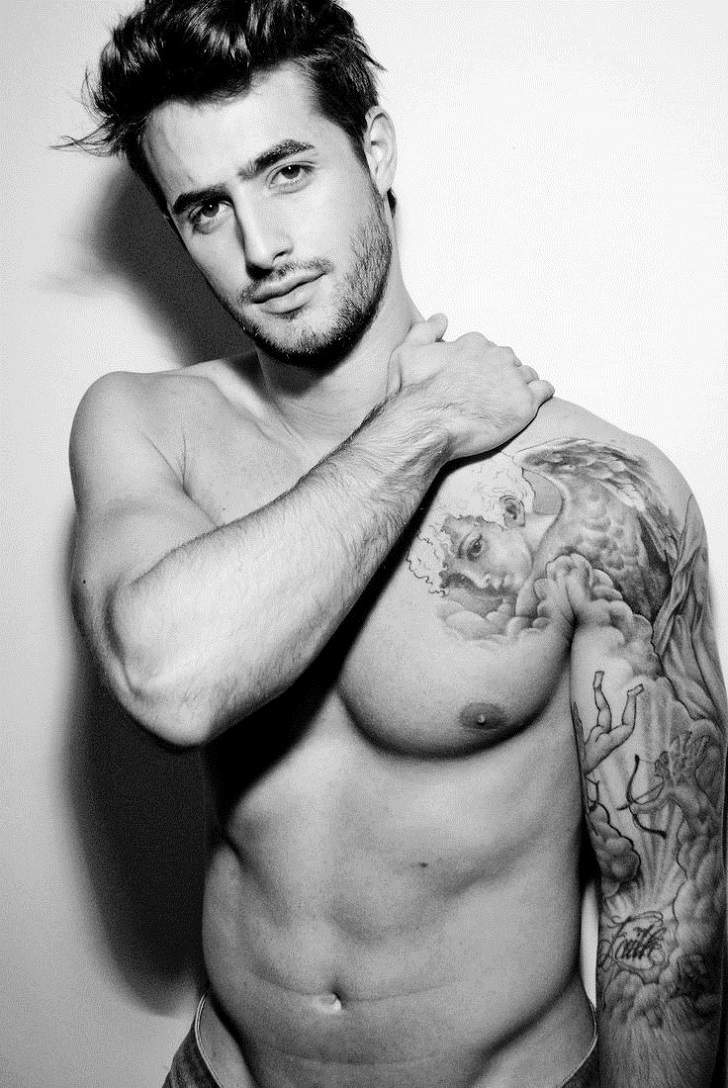 Angel tattoos always have a very special meaning. Angels are a symbol of the divine or of a special spiritual state of the person. When choosing such an image, a person shows his faith, a special attitude and a hope for something. The word came from the Greek word “aggelos” which means a messenger. Angels are God’s messengers. They are also the invisible guardians of people, protecting them from evil forces. Therefore, the tattoo implies a religious meaning but also protection, goodness, love, spirituality of a person, as well as beauty and peace. We shall look at the different types of angel tattoo designs for men and women, the meaning of the tattoo and will show you a selection of unique tattoo ideas.

Angel tattoos for men and women – understanding the meaning 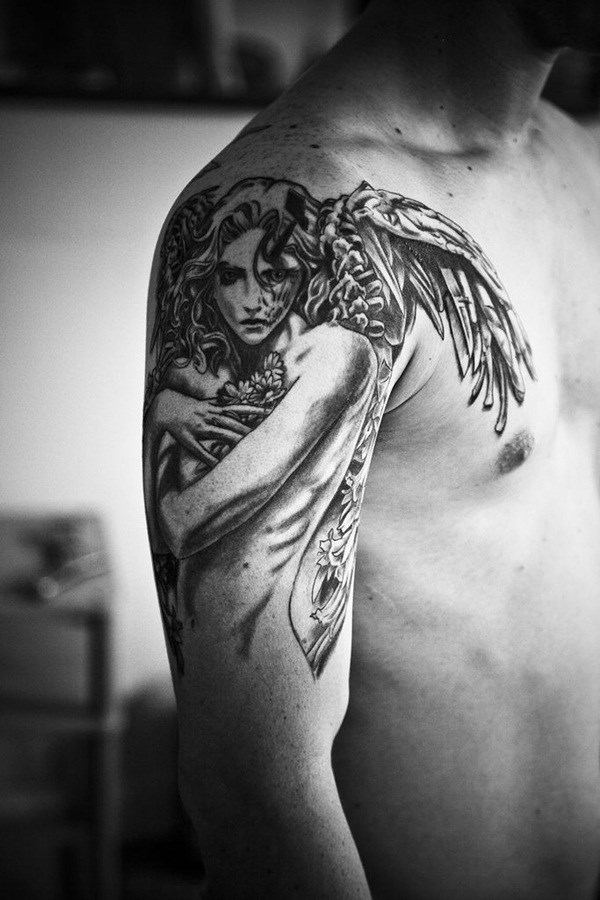 The first images of angels, or rather, winged people, appeared in the times of Ancient Egypt. It is not surprising, because their concept of divinity was based on their heavenly nature. Further, similar beings appeared in the religions that are popular today – Islam, as well as Christianity. In the past, the images of the angel were associated with religious beliefs. Angels are the intermediary between the physical and the spiritual worlds, the messengers between God and people, the magic winged creatures were sent to earth to express the divine will. They were portrayed as long-haired young men with large wings. In modern culture, angels have become a symbol of faith, purity, humbleness, love, protection, etc. To many people angel tattoos symbolize the longing for freedom and perfection. Cherubs have become symbolic for innocence, love and pleasure, an angel warrior with a sword could be a symbol of protection or of man’s rebel.

Angles have their own hierarchy and according to ancient texts the Angelic Choir consist of the Seraphim, the Cherubim, the Ophanim, The Virtues, and the Archangels. Each of them has their specific function and when we talk about the tattoo meanings you need to understand the different angel tattoo variations. 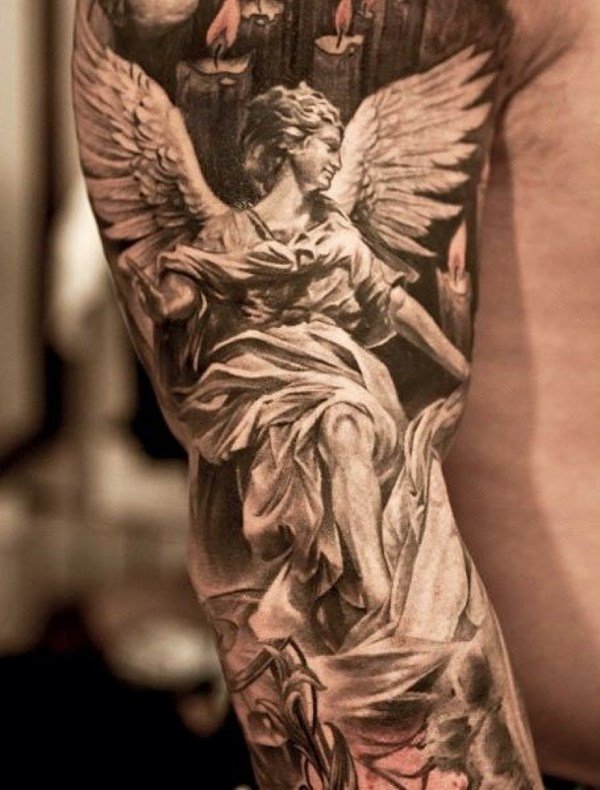 Guardian angels are the ultimate defenders of mankind and humanity. They are depicted on the body of a person who has a caring and responsive character. Many people with such tattoos want to show their belief in the fact that someone keeps them. 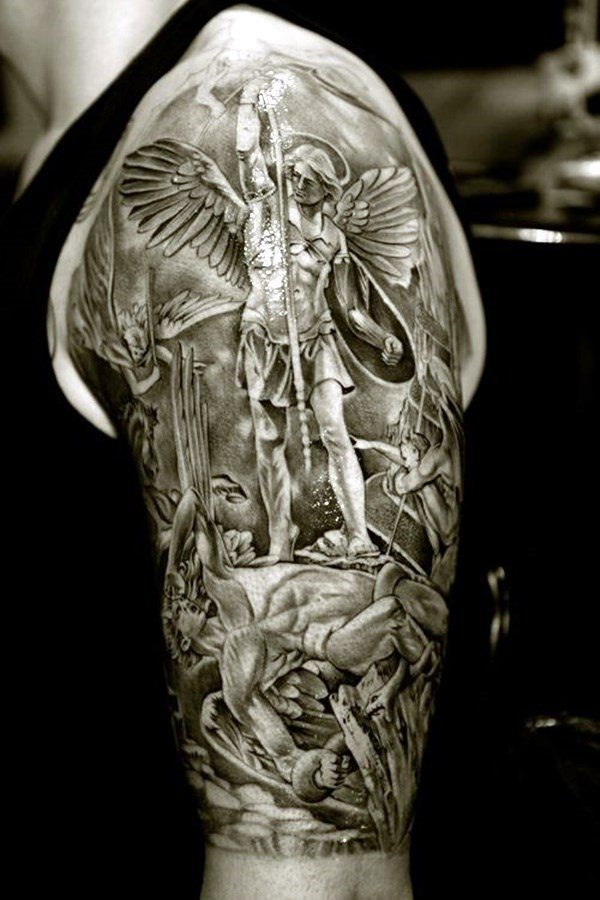 The Archangels are closer to God. Archangel Michael leads an army of angels against Lucifer, who was previously an angel, and chases him away from heaven. Fragments of battle you can see in tattoos, like archangels with armor and sword. These are the wars of God that overcome evil. 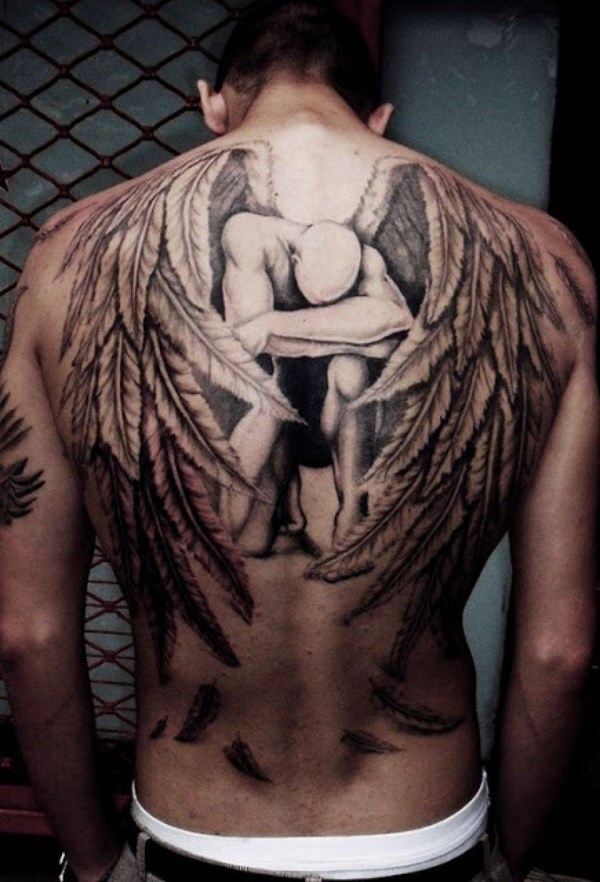 Fallen angels are the ones who joined Lucifer’s rebellion against God and were thrown out of heaven for their evil deeds. They are dark angels who have lost the battle. They appear in heavy black ink with bloody knives, scars and skinned wings. They are not religious symbols and are a symbol of suffering, pain, and sadness, a sign of rebellion against the rules of society. 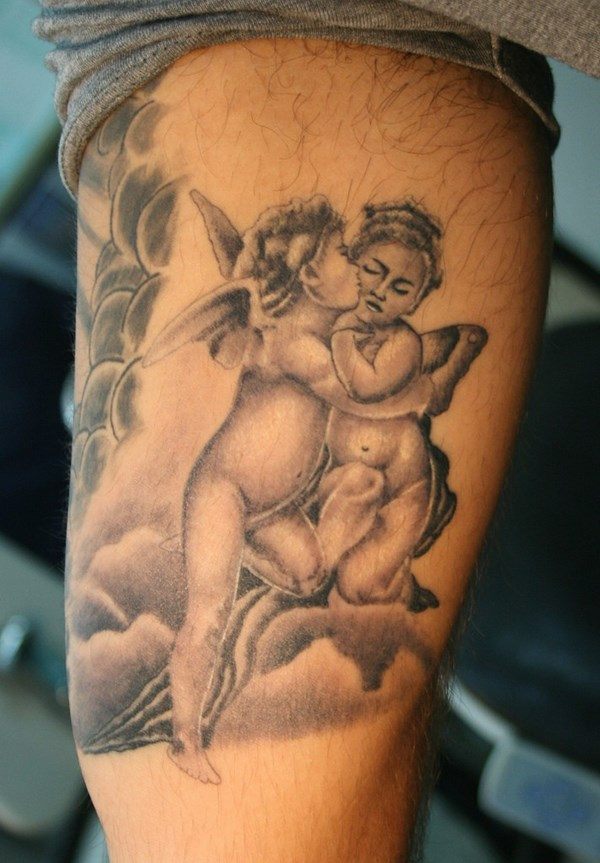 Cherubim tattoos are the sweetest angel tattoos. Cherub or Baby Angels appeared in artworks in the Middle Ages and are usually depicted playful or sleeping. Cupid is the most famous cherub of all and is a symbol of love.

Angels are a symbol of hope, faith, protection, innocence, death, loss, rebirth, power, strength, spirituality and every Angel tattoo will have its own special meaning for the person who wears it. We shall look at the different meanings which will help you choose the design of your tattoo depending on the meaning it has for you. As mentioned above, for many, this is an expression of their faith. An angel is a mediator between people and God. Probably, some believe that in this way they will become closer to God. Such a tattoo can really help a person, give him strength due to the belief that he has a guardian and an Angel is his protector.

Praying angels express the need of connection with God, as the prayer is the way of communication between people and God.

A fallen angel tattoo represents the struggle, the loss of Paradise and people choose this design when they have lost something or someone close to their heart. Fallen angels are usually looking up to Heaven or down, the angel could be on his knees or sitting with his head down.

Flying angel tattoos express hope, resurrection, rebirth. They are usually made in memory of someone who has passed away.

Guardian and Warrior angel tattoos are typically associated with protection and while the Guardian performs the protective function, the Warrior would fight the Evil.

Baby or Cupid angels, which are a popular choice of women, are known as the “angels of love”

Tattoos with an angel often reflect the character of a person, his kindness, gentleness, sympathy, tenderness, spirituality and love for those around him.

Angel wings tattoos are also very popular choice for both men and women. The wings are, actually, an interpretation of the idea for an angel and bear the same meaning – a desire for protection or liberation of the soul from any burdens. For many people, angel wings symbolize freedom and the power to overcome difficulties in life.

What is the best place for angel tattoos? 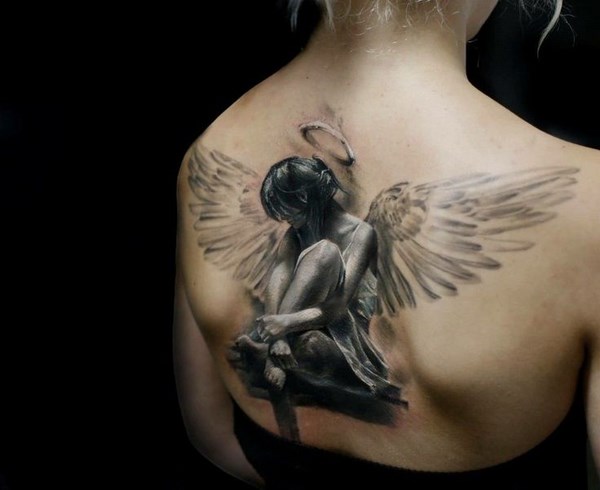 This is something that one should decide individually, depending on the size of the tattoo, the design and of course, the personal preferences. In connection with the fact that the angel is a rather intimate tattoo (reveals the relationship of a person to God), it is usually applied on body parts which are hidden from the eyes. It can be a shoulder or chest .An angel tattoo on the chest is the choice of those who want the symbol to be closer to their heart. The heart has always been considered a symbol of love, loyalty, sincere faith and devotion to God. Angel wings are typically tattooed on the back. As we said earlier, it will depend entirely on you to choose the body part for your Angel tattoo depending on the meaning and symbolism it has for you. 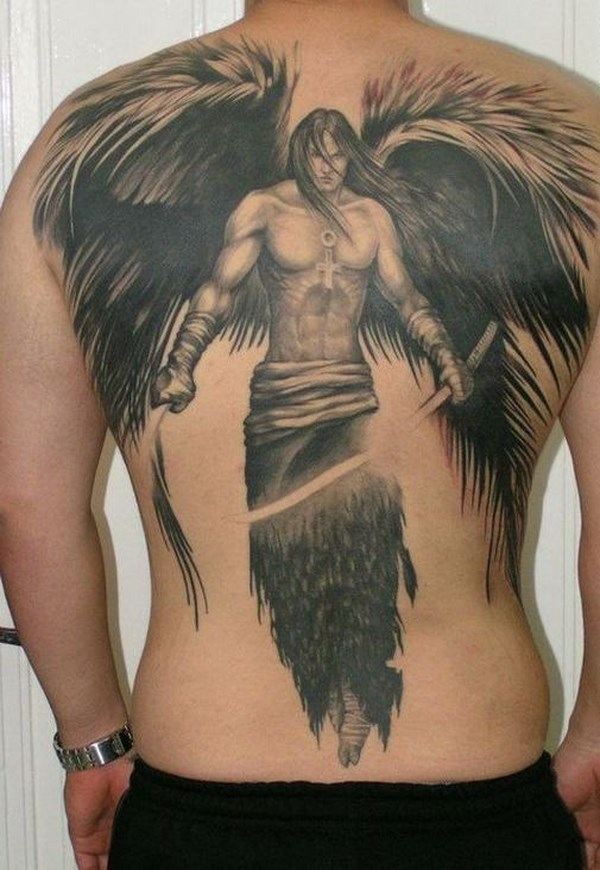 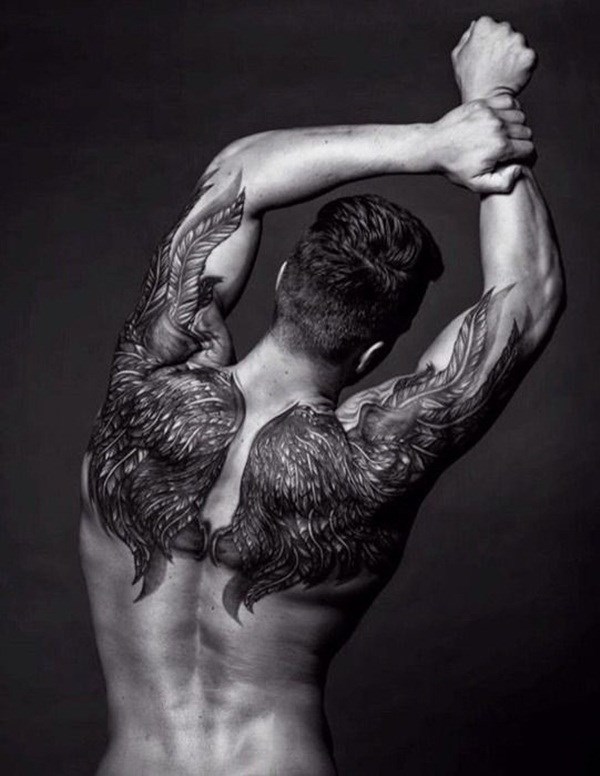 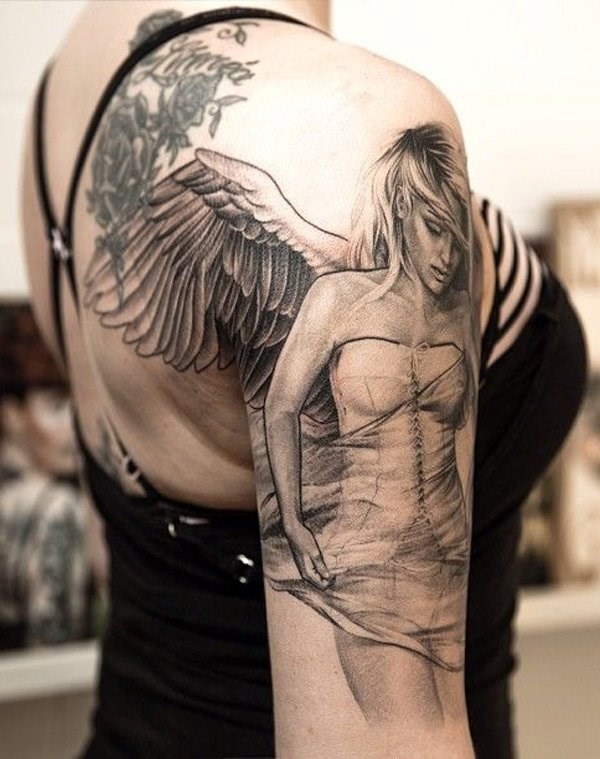 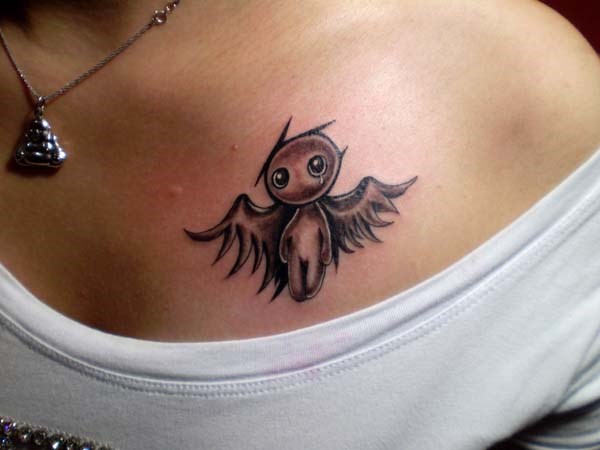 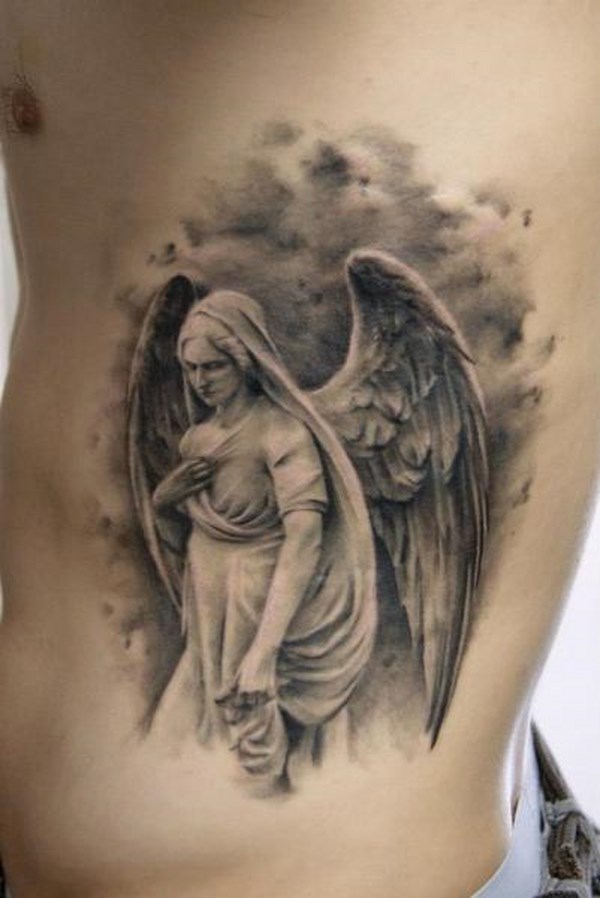 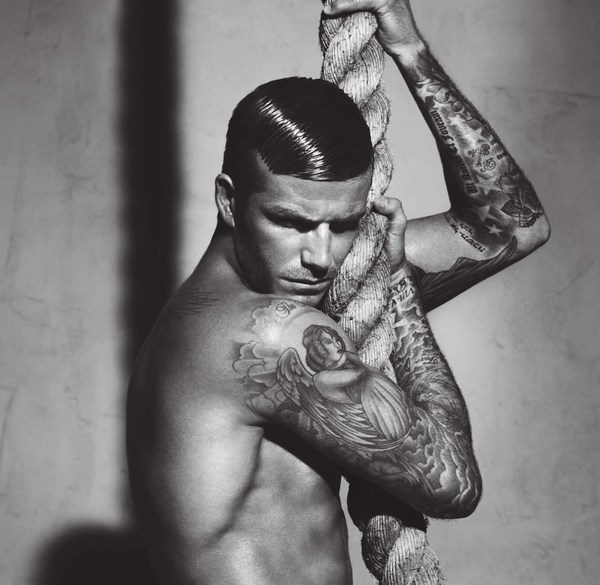 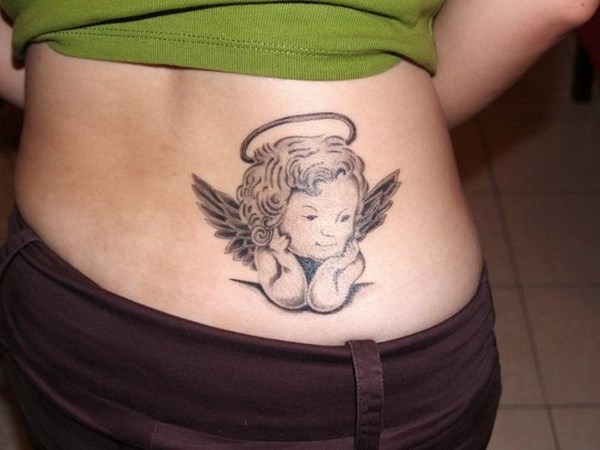 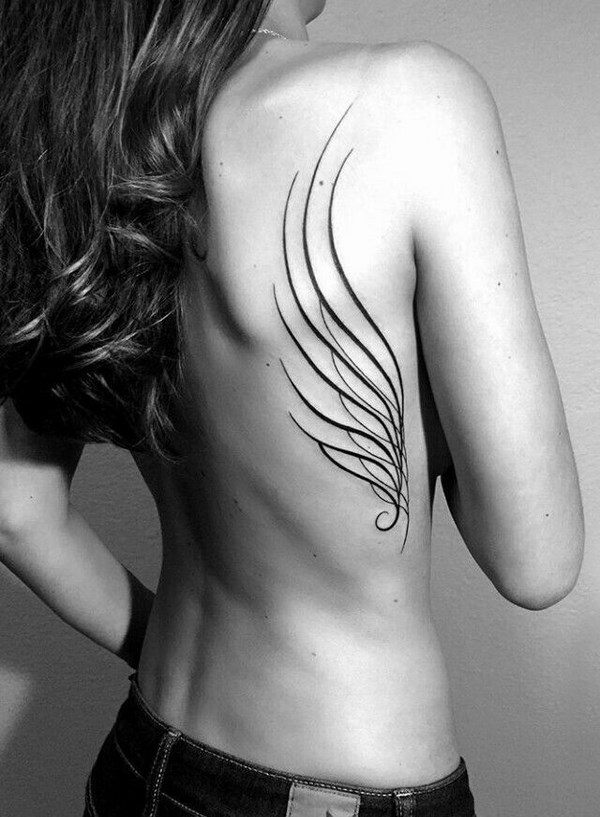 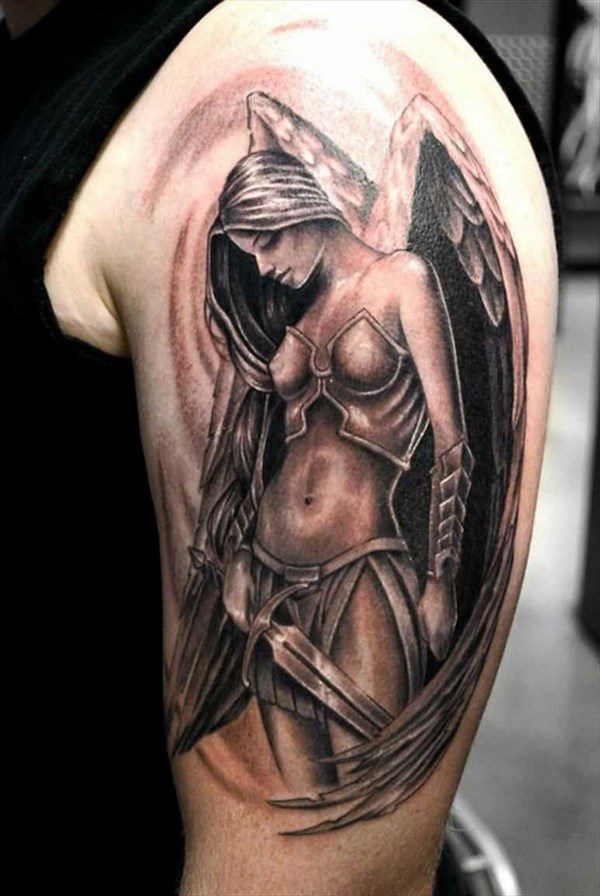 Tattoo styles and techniques – find out which one you like best