Semifreddo recipes are so many and one wonders which one to prepare because this dessert is a fantastic summer treat in each of its numerous varieties. As you know, Semifredo is a traditional Italian dessert – soft homemade ice cream with various additives – cookies, nuts, fruits, chocolate, etc. Its name translates as “semi-frozen” so it is actually not an ice cream despite that it is often classified as a part of the gelato family. 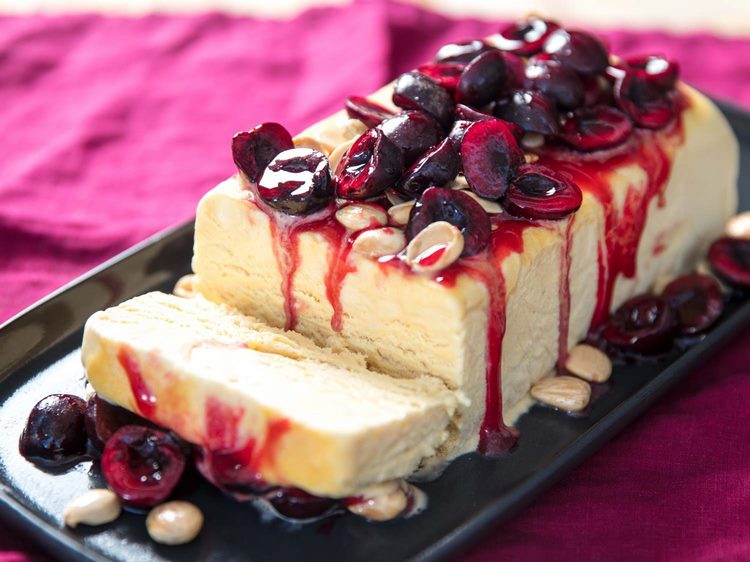 Semifreddo appeared not so long ago, especially its modern variation. The dessert was created at the end of the 19th century as an evolution of another popular dessert – French parfait. The Italians invented ice cream, and then the recipe migrated to France where it became popular as parfait. Traditional recipes are based on meringue (whipped egg whites) or pâte à bombe (foamed egg yolks) and cream. The taste of semifreddo, like parfait, depends on the ideal balance between sugar, liquid, eggs and additives that give the feeling of airiness and soft cream at the same time. If you put almonds in the creamy egg mass, you will get almond semifredo, if mint – then mint. The options are plenty, the scope for imagination is enormous. 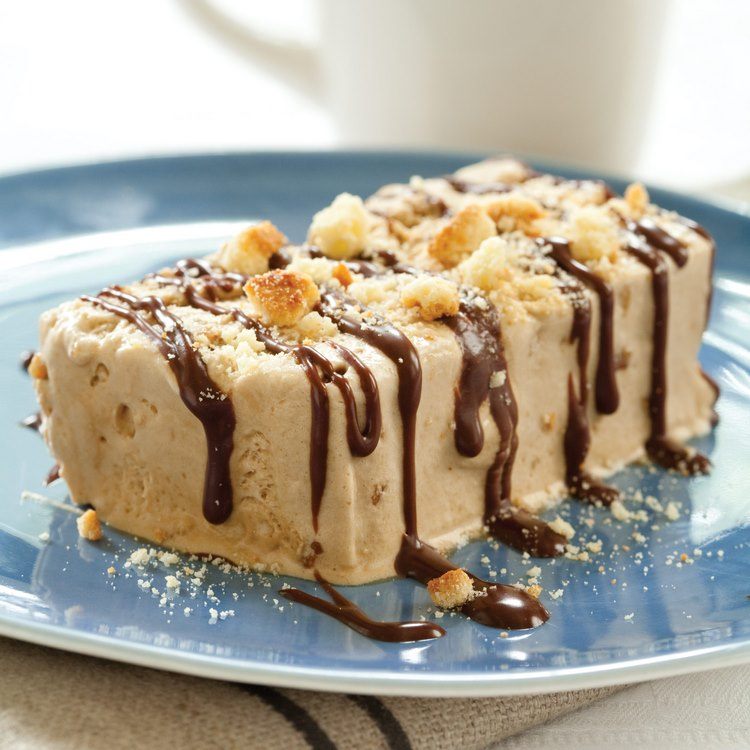 In terms of preparation, semifreddo requires more attention to protein readiness. The great news is that you do not need an ice cream maker! However, to prepare this type of soft ice cream at home, you need to follow some basic rules.

The method includes three important steps. You have to make a whipped cream, a custard sauce and a shiny meringue from whipped egg whites and sugar. Then you fold everything together, pour it into a loaf pan lined with plastic and freeze it.

As easy as it sounds to whip cream, you need to be careful not to overdo it. You need to whip the cream until it forms soft peaks. For the best results, it is recommended to chill the bowl in the freezer for about half an hour before using. 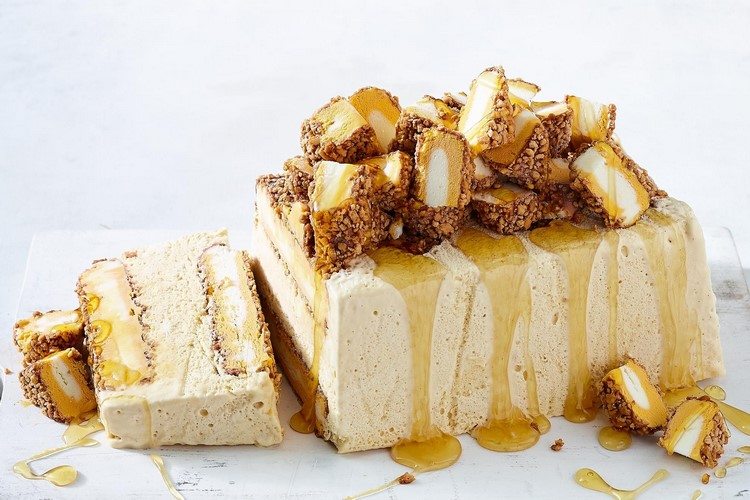 To make a custard base, you need to heat the milk and add it gradually to the egg yolks. This will temper the yolks and they will be heated without curdling. Once the egg yolks are tempered, the mixture is returned to the heat and cooked.

The final step is mixing the base and the whipped cream. You need to add the cream to the custard gradually and gently fold it in. The goal is to mix the ingredients completely without losing the air. 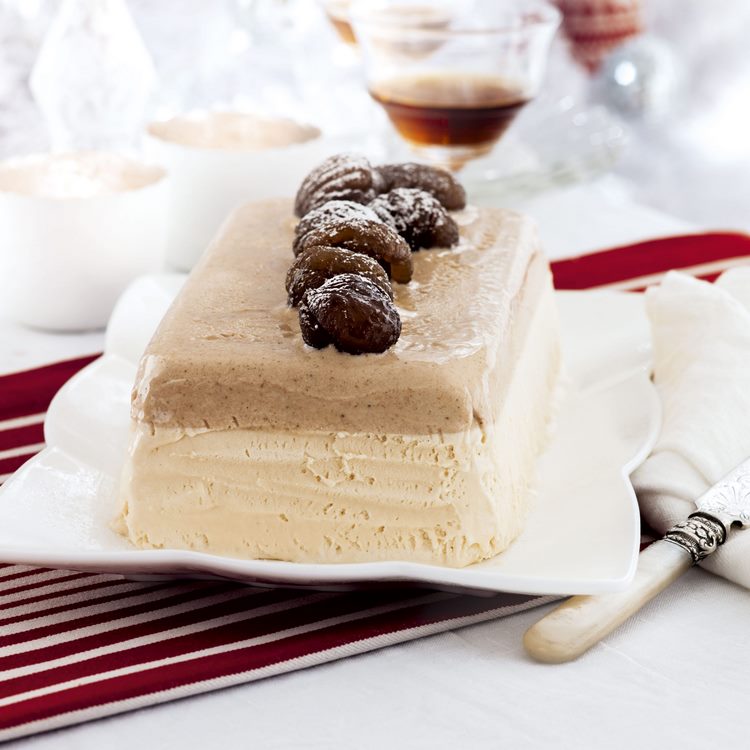 When ingredients are combined, pour the mixture into a pan lined with plastic wrap, and freeze.

Once the base is made, it is folded together with the whipped cream. Take a third of the cream and mix it with the base, then add another third and gently fold the mixture over on top of itself to combine. Add the last of the cream, fold to combine, until solid.

Place the egg yolks and sugar in a large mixing bowl and whisk with an electric whisk until pale and thick.

Place the bowl over a pot of hot water. Whisk with a hand whisk whilst slowly adding the marsala, then add the vanilla. Continue to whisk until the zabaglione is frothy, pale and doubled in size.

Melt the chocolate and set it aside to cool slightly.

In the meantime whip the cream to soft peaks.

Slowly add the melted chocolate into the zabaglione until completely incorporated.

Add one third of the whipped cream into the chocolate mixture and fold it gently. Continue adding 1 third at a time until the cream and custard are combined. 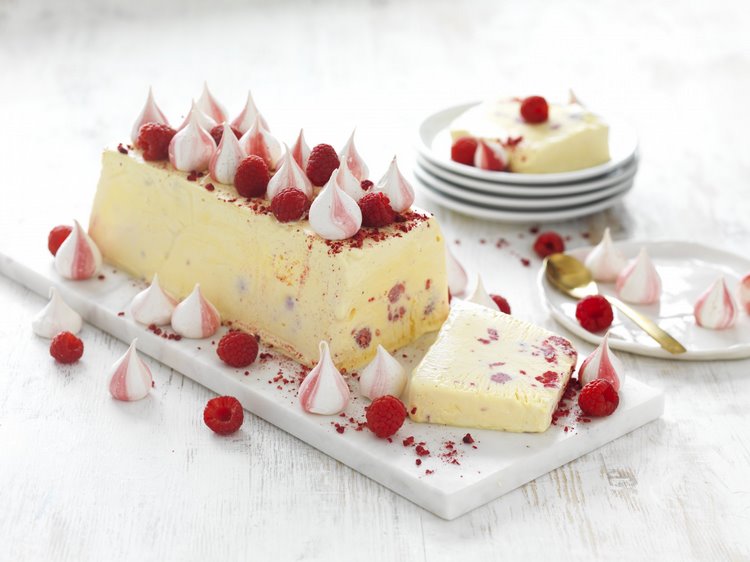 Grease a loaf pan and line it with baking paper, leaving a 5cm overhang at each long end.

Place eggs, egg yolks, sugar and vanilla in a heatproof bowl. Place bowl over a saucepan over simmering water over low heat. Whisk until thick and creamy. Remove from heat and whisk for a further 3 minutes, or until cool.

Place cream in a large bowl and whisk until thickened. Add the egg mixture into the cream and gently fold to combine.

Place half the raspberries and sugar in a small bowl and crush with a fork. Add the crushed raspberries to the cream mixture and gently fold to combine. 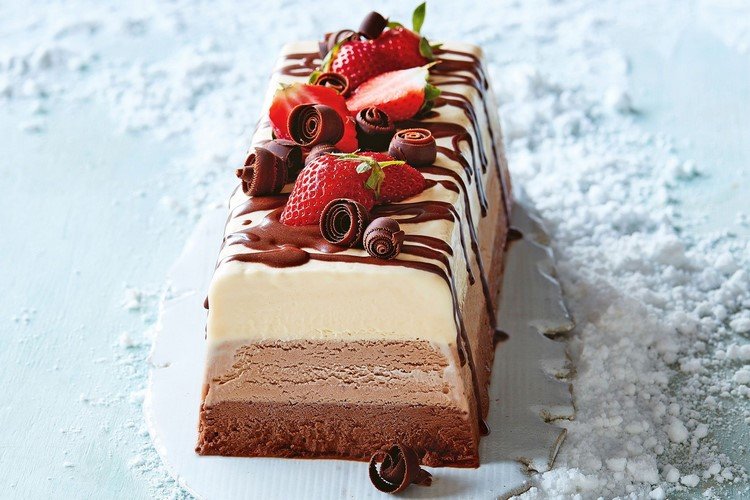 Line the base and sides of a 5-cup loaf pan with plastic wrap, allowing the sides to overhang.

Combine the eggs, egg yolks and sugar in a medium bowl over a medium saucepan of simmering water. Carefully whisk for 4-5 minutes or until thick and creamy. Cover and let it cool.

Whip the cream until soft peaks and fold it into egg mixture. Divide into 3 portions and return to fridge.

Remove 1 portion of mixture from fridge. Bring to room temperature. Stir in melted white chocolate. Pour into prepared pan. Freeze for 2 hours or until set.

Remove another portion of mixture from the fridge and bring to room temperature. Stir in melted milk chocolate. Pour over white chocolate layer. Freeze for 2 hours or until set.

Repeat with remaining mixture and dark chocolate. Pour over milk chocolate in the pan. Cover with plastic wrap. Freeze overnight or until firm.

To make chocolate sauce, combine chocolate, cream, milk and sugar in a small saucepan over medium-low heat. Cook, stirring, for 2-3 minutes or until chocolate melts and sauce is smooth. Set aside to cool to room temperature.

Before serving, remove the pan from freezer and let it stand in the pan for 10 minutes. Invert semifreddo onto a serving plate and drizzle with the chocolate sauce. 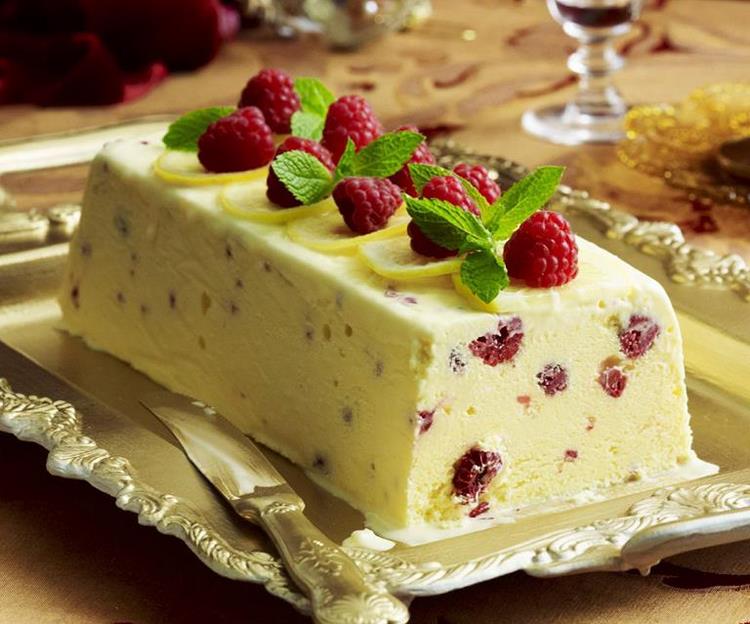 Stir lemon rind, juice and sugar in small saucepan until sugar is dissolved; bring to the boil. Remove from heat and cool for 10 minutes. Strain lemon syrup into small jug and discard solids.

Beat egg yolks in small bowl with electric mixer until light and fluffy. Beat in lemon syrup and limoncello liqueur and transfer to large bowl.

Freeze about 4 hours or until thick but not frozen. Stir in frozen raspberries. Pour mixture into loaf pan. Cover with plastic wrap then foil and freeze overnight or until firm.

Stand semifreddo at room temperature 5 minutes before turning out. Top with fresh raspberries and mint. 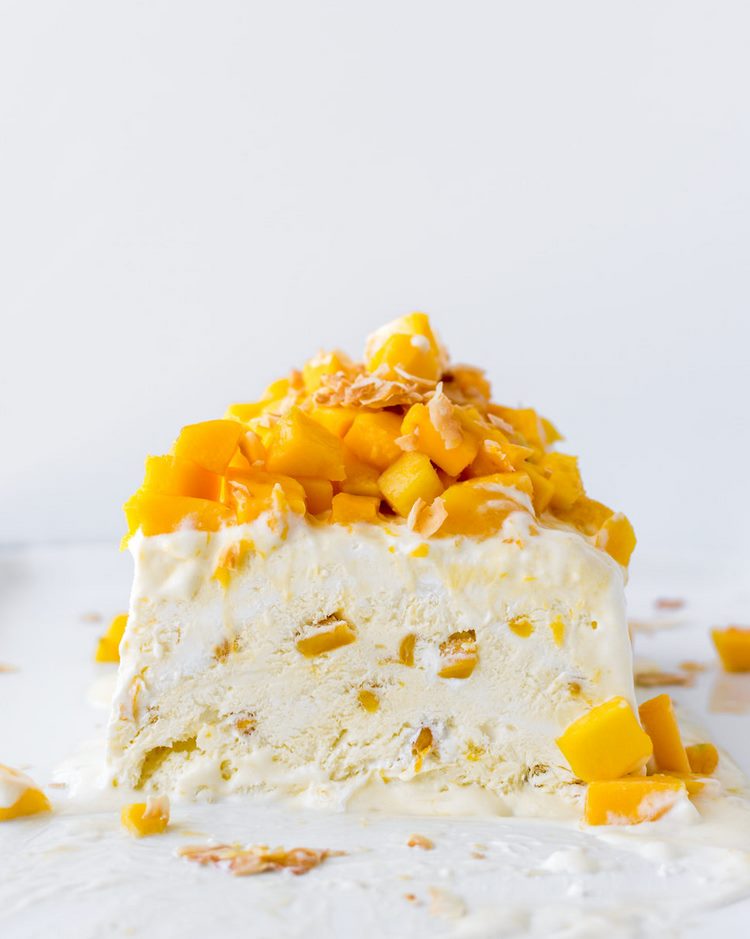 Put the dried mango in a medium heatproof bowl and cover with boiling water by 1 inch. Set aside to soften for 20 minutes.

Line a loaf pan with enough plastic wrap to leave a tail on both ends.

Scoop out the firm layer of coconut cream that has solidified at the top of the can. Place this coconut cream in a chilled mixing bowl and combine with heavy whipping cream. Whip until firm peaks form, 3-5 minutes. Refrigerate.

Drain the dried mango and finely chop. Combine with apricot preserves. Set aside.

Put the egg yolks and 1/3 cup of the sugar in a medium metal bowl and set the bowl over a pan of simmering water, making sure the bottom of the bowl doesn’t touch the water. Beat on medium speed, frequently scraping down the sides of the bowl with a silicone spatula, until the zabaglione is thick, almost doubled in volume. Remove the bowl from the pan and fold the chopped mango mixture into the zabaglione until combined. Set aside.

Return the water to a gentle simmer. Put the egg whites, the remaining 1/3 cup of sugar, the cream of tartar, and salt in a large metal bowl and set it over the pan of water. Beat on medium speed, scraping down the sides of the bowl with a clean silicone spatula, until light, fluffy, and shiny, about 3 minutes. Remove the bowl from the pan, add the vanilla extract and continue beating until the meringue is very thick.

Gently fold the zabaglione into the meringue and then fold in the whipped cream.

Scrape the mixture into the prepared pan and smooth the top. Wrap the overhanging plastic over the top to cover and freeze for at least 6 hours and up to 3 days.

Invert the pan over a serving platter and remove the plastic wrap. 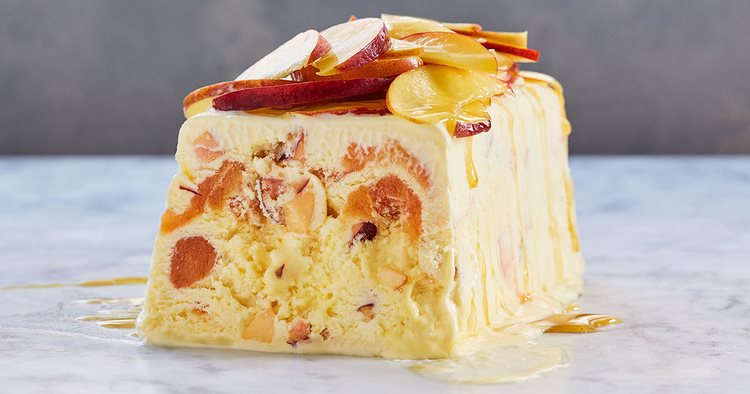 Line a loaf pan with plastic wrap, leaving at least 3 inches of overhang on all sides.

Whip the cream with ⅓ cup of the sugar until it reaches medium peaks. Transfer the whipped cream to a bowl, cover with plastic wrap and refrigerate.

In a medium bowl, whisk together the egg yolks, salt and remaining sugar. Place the bowl over a medium pot of simmering water and heat, whisking constantly, until the mixture reaches 170ºF on a thermometer, about 3 minutes.

Transfer the egg mixture to the bowl of an electric mixer, add the vanilla and almond extracts and whip until the mixture is pale and thick, about 5 minutes.

Gently fold the whipped cream into the egg mixture until combined.

Pour about 1/3 of the semifreddo mixture into the prepared pan. Drizzle with 1/3 of the peach jam and use a skewer to swirl it through the semifreddo. Scatter 1/3 of the diced peaches on top. Repeat two more times until you’ve used all the ingredients.

Cover the semifreddo with the excess plastic wrap. Freeze until firm, 7 to 8 hours.

In a medium bowl, toss the sliced peaches and honey to combine. Pile the peaches on top of the semifreddo and serve immediately. 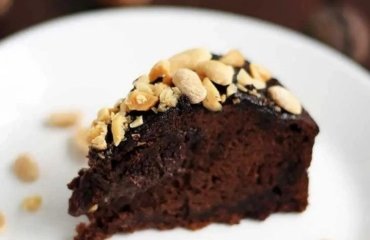 Vegan Cake: These are the best, simple recipes for vegan sweets with chocolate, cinnamon and more 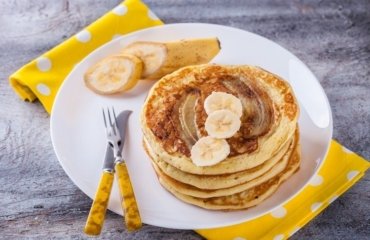 What to Do with Overripe Bananas? Here Are 4 Quick And Easy Recipes to Try! 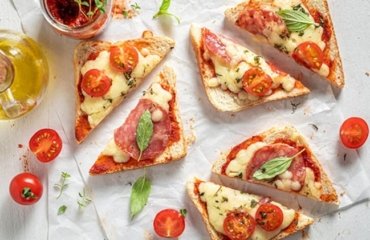 Food trend 2022: These pizza toast recipes are ideal for a quick lunch or dinner during the week! 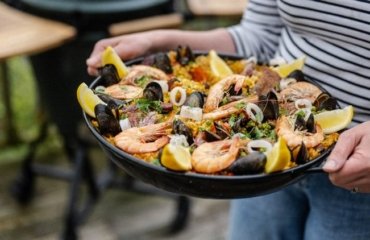 5 Easy and Light Summer Meal Recipes for a Delicious Dinner with Friends! 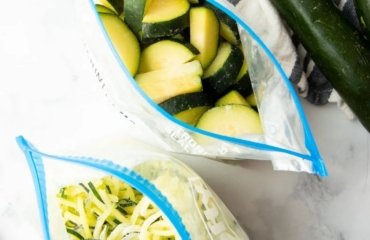 How to Store Zucchini for the Winter? Tips for Enjoying Good Vitamin Dishes During the Cold Season 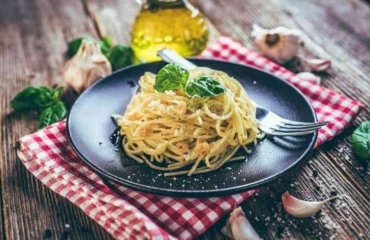