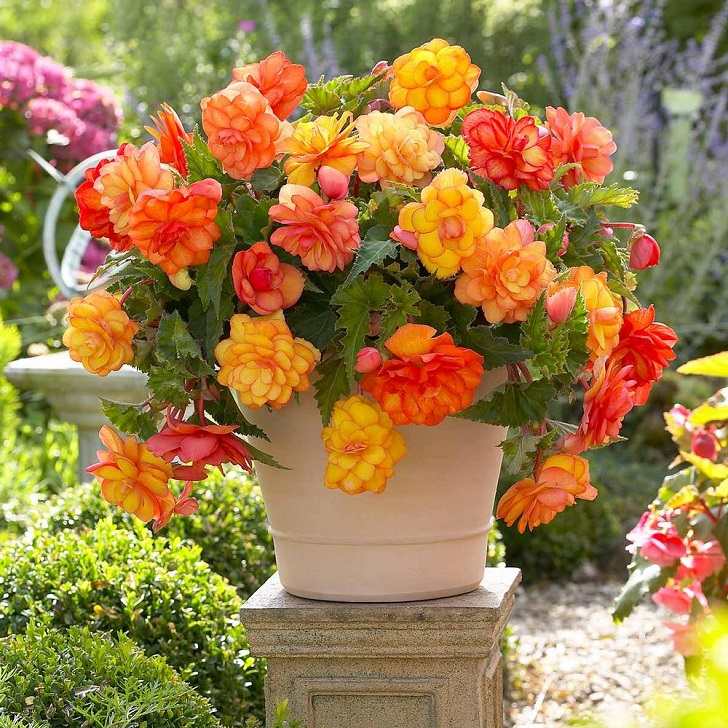 Begonia (Begonia) is one of the most beautiful plants used to decorate gardens, parks, squares and in apartments as houseplants. This flower belongs to the numerous Begoniaceae family. The genus includes about 900 species, native to moist subtropical and tropical climates, and about 2000 hybrid samples.

The plant received its name thanks to Michel Bégon (1638–1710), governor of Santo Domingo, who was known for his exceptional love for rare plants. Michel Bégon organized and sponsored an expedition to study the flora of the West Indies, where the famous botanist Charles Plumier discovered beautiful flowers that had no analogues in the world. He described them and called them begonia, in honor of his patron. Initially, begonias were used as a plant grown in conservatories and with the growing popularity of this magnificent flower, a great number of hybrids appeared that could perfectly tolerate the surprises of colder climate. Nowadays, throughout the world, there is a huge number of hybrid species and varieties of begonia, flowering in numerous colors. 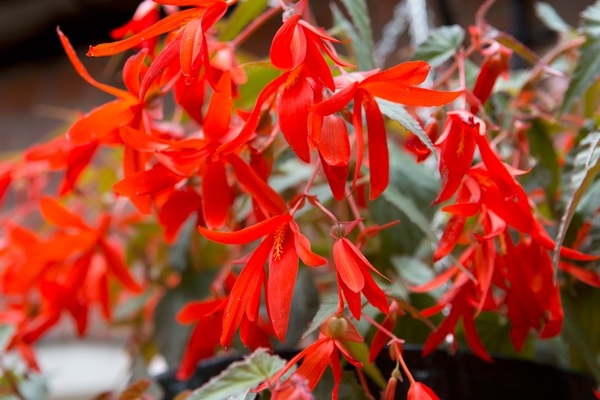 The variety of begonias is enormous – from miniature species, suitable for breeding in terrariums, giant varieties reaching two meters of height and species with cut-up leaves with a diameter of up to 30 cm. Some begonias grow like small shrubs, full of clusters of bright colors or flowers hanging like heavy bouquets from the top of the stems. Almost all begonias have thick stems, some of which are very short, almost inconspicuous, and on other species they are long and slender. Their leaves are asymmetrically placed. The color and size of the flowers for the different types are not the same. Most of begonias bloom profusely throughout the summer. The easy breeding, the huge variety of shapes and the unusual exotic beauty of the leaves, the profuse and long flowering have contributed to its rapid spread and its wide popularity all over the world.

What are the most popular begonia varieties? 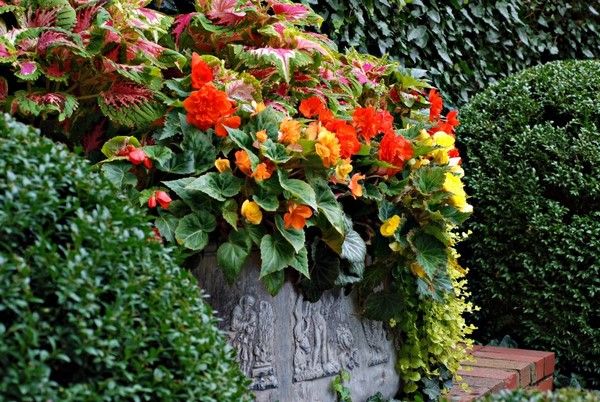 Because of their rich variety, begonias are not classified with meticulous clarity. There are some large groups that we shall look at closely, but it is good to know that all begonias have several common features. Their main feature is that Begonia flowers are monoecious (male and female flowers appear separately but on the same plant). Typically the stems are fleshy and the leaves are asymmetrical. Botanists divide the begonias into groups. 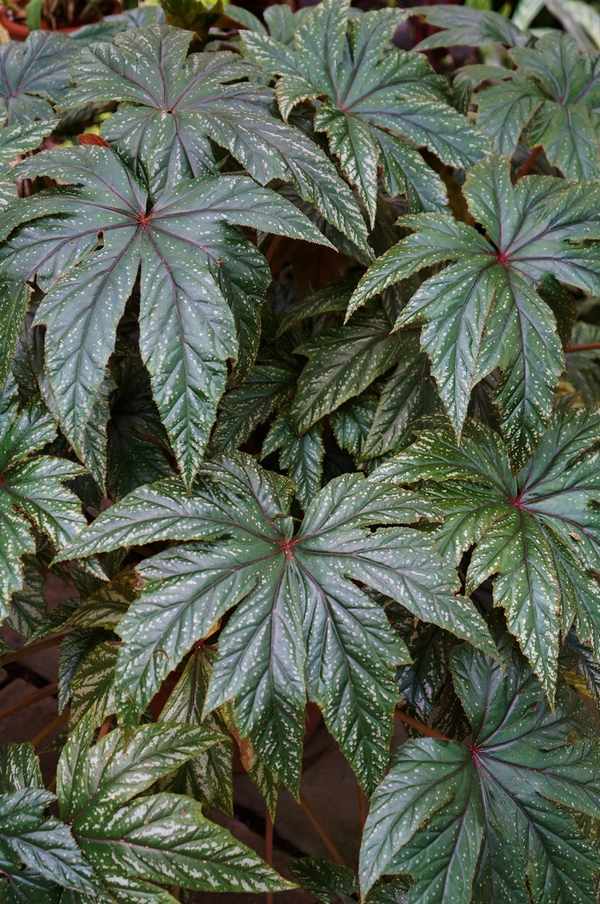 Rhizomatous фegonias are more than 700 species that have a thick, fuzzy stem-like structure (rhizome) that are used for propagation – most often the species of this group are grown for the leaves. The group is divided into two categories – Rhizamotous Begonias and Rex Begonias. This is a category with hundreds of species, usually multiplied by stem cuttings, leaf cuttings or division.. Typically, these are compact plants with round or star-shaped foliage and are mainly grown for their attractive and often very colorful foliage. The flowers are pink or white and bloom during the winter. Begonia heracleifolia nigricans is one of the rare begonia varieties with star-shaped leaves. 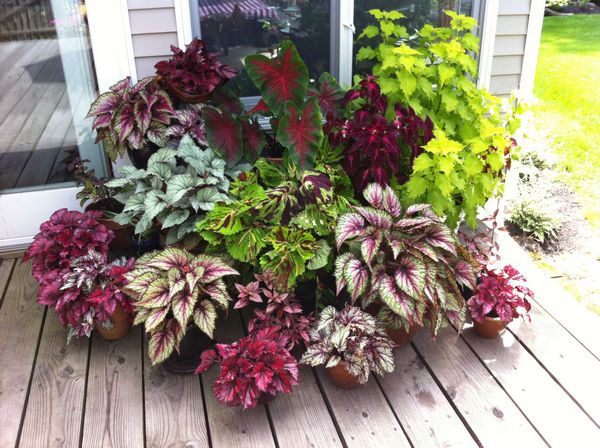 Rex Begonias (B. x rex-cultorum) have big, multicolored leaves and are highly valued for the exotic foliage. Typically, Rex Begonias were characterized with ear-shaped leaves, but nowadays there are varieties with star-shaped and even spiral leaves. The colors of leaves vary from green to silvery, purple, brown, pink and reddish. Rex varieties will grow well with less light and will thrive in moist conditions with humidity around 70%. Some of the most popular varieties from this group are Begonia “Escargot”, B. ricinifolia, B. “Marmaduke”, B. “Erythrophylla”, B. “Iron Cross” and B. “Benitochiba”. 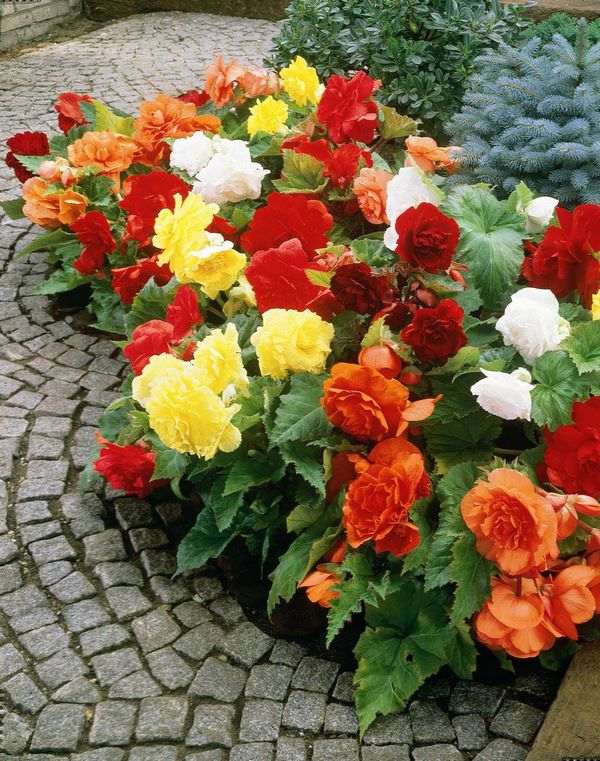 Tuberous begonias – this is another large group of species. These varieties are the super stars and are prolific bloomers. They bloom in scarlet, pink, yellow, apricot, salmon, rose, etc. Tuberous varieties get their name from the tuber – an underground organ which looks much like a potato. The main difference from other types is that tuberous species go fully dormant for months, losing both leaves and stems. Tuberous begonias grow well in semi-shaded areas and typically bloom from summer to fall. This is the best choice for containers, hanging baskets, window boxes, etc. However, you need to keep in mind that they need protection during winter period since frost can kill them. 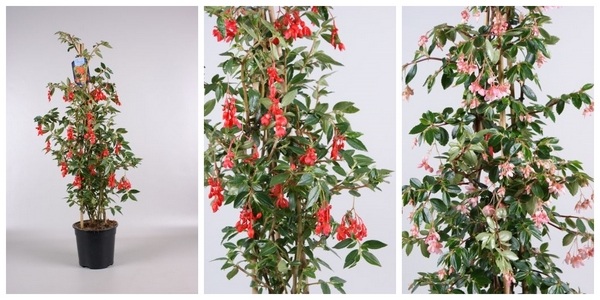 Cane Begonia (Begonia x coralline), also known as “angel-wing begonias” or “true-tree begonias” have very stiff woody stems with bamboo-like joints withstanding strong winds which makes them very suitable to grow outdoors planted in the garden or in pots. Cane varieties can reach a height of about 10 feet and the flowers are usually large, cascading clusters of white, pink, red, or orange. Some of the most popular varieties are B. albo-picta, B. “Irene Nuss”, B. “Lenore Olivier”, B. lubbersii, B. “Lucerna”, B. “Sophie Cecile”, B. “Carriere” and B. ‘Tingley Mallet. 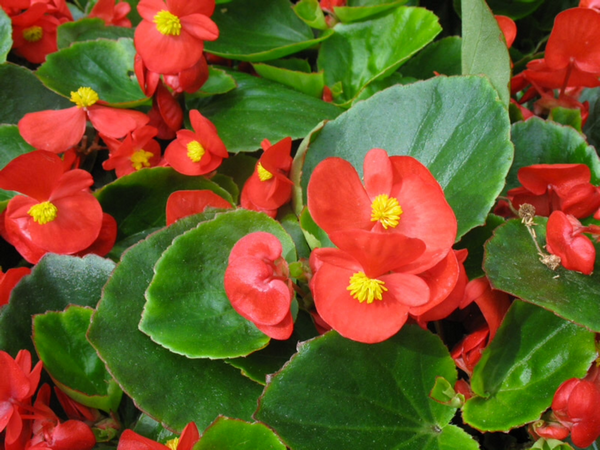 Semperflorens Begonias (B. x semperflorens-cultorum), also called wax or bedding begonias are one of the most popular plants for flower beds as they are exceptionally durable and survive in dry conditions. This is a relatively compact variety with bronze and green-colored spoon-shaped foliage and numerous small flowers in a variety of pink, red, orange and white shades blooming from late spring to early fall. The plant will thrive in rich, moist, well drained soil. Wax begonias can be produced by seeds, division or stem cuttings. They are excellent not only as garden plants but as houseplants as well. Some of the varieties include B. schmidtiana, B. x benariensis, Dragon wing and Baby wing species, Ambassador Green Leaf, etc. 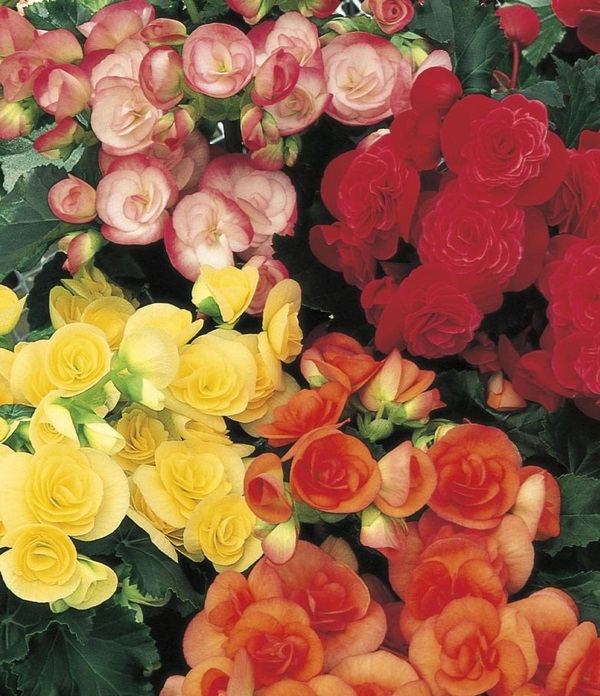 Rieger Begonias, also called Blush, Elatior begonia or Hiemalis begonias, are one of the few varieties blooming in winter with bright red, yellow, pink, white and orange flowers. Hiemalis means “of winter”. They need lots of bright light, but not direct sun. Rieger Begonias are cross between a standard wax (fibrous) begonia and a tuberous begonia. However, the flowers are smaller than the ones of the tuberous varieties and bloom profusely. Propagation is by stem cuttings but Hiemalis begonias are known to be extremely difficult to recuperate and most gardeners simply buy new plants every year. 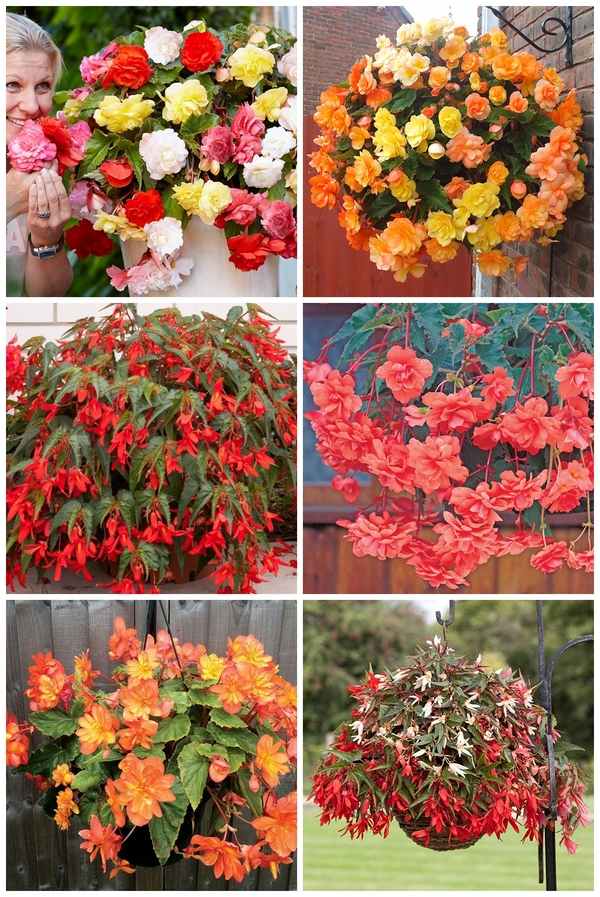 Trailing Begonias are also called Trailing Scandents or Cascading begonias are the perfect choice for hanging baskets or climbers in the garden. They are easy to grow and produce a profusion of spectacular, vibrant blooms cascading over the sides of hanging baskets, containers or window boxes. The color choice is wide and these long lasting species will bloom until late fall. Trailing begonias are also very durable and can easily withstand changing weather conditions. Propagating them is easy by using stem or tip cuttings. Some of the most spectacular varieties are Begonia Sparkle, B. Odorata, B. Splendide, B. Pendula, B. cascade pink, B. cascade white, B. cascade red Begonia “Bertini”, Begonia Boliviensis Starshine Red, B. Inferno, etc. 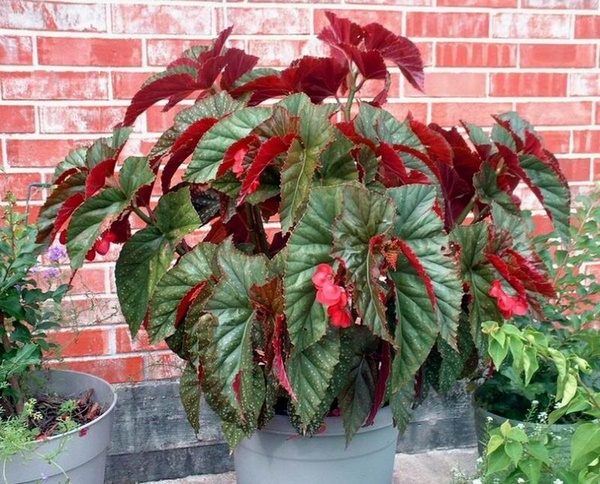 Shrub Begonias can range in size from miniatures to giants. They look almost the same as Trailing Scandents but with thicker foliage. Shrub-like begonias get their name from the way they grow with many shoots coming up from the soil to make a full plant. Typically, these varieties are grown for the lavish leaves and thick stems as most of the shrub begonias are not blooming. Some of the popular types are B. ‘Alleryi’, B. ‘Christmas Candle’, B. ‘Dovecot’, B. exotica, B. fischeri, B. ‘Medora’, B. metallica, etc. Shrub Begonias are ideal for potting as well.

How to grow begonia – planting and care tips 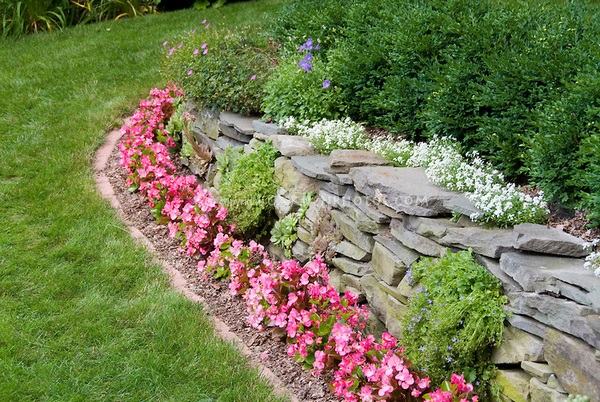 Many people wonder how to grow begonia and think that due to the numerous varieties each type would require special conditions. However, most begonias require pretty similar conditions.

Water: moderate watering. Remember that too much water can kill your begonias. Make sure that the plants are dry between waterings. Make sure there is no stagnant water.

Temperature: Moderately warm – minimum 13°C in winter; Avoid temperatures above 21°C. Almost all begonias need to be moved indoors during the cold months to save them from from the cold.

Light: Well-lit place, but not in direct sunlight, areas with partial shade are ideal and many begonia varieties will tolerate full shade; in winter it is nice to put them in the sun for several hours. Some sun-tolerant tuberous and wax begonia hybrids do well in full sun.

Begonias often suffer from white sickness due to the fungus. The affected leaves are removed and, if necessary, the flower is sprayed with a special fungicide, which can be found in the agricultural pharmacies.

Planting and propagation: The easiest and quickest way to propagate begonias is by stem cuttings or rhizome cuttings. Many species can be multiplied by leaf cutting as well. If you plan to grow begonias outdoor, they should be planted in late spring after any danger of frost has passed. When potted, plants are usually re-potted in spring. 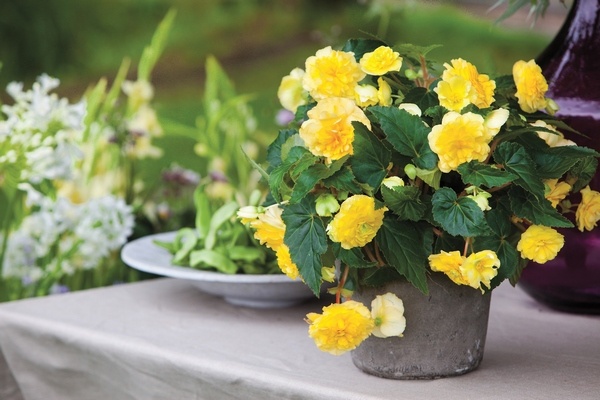 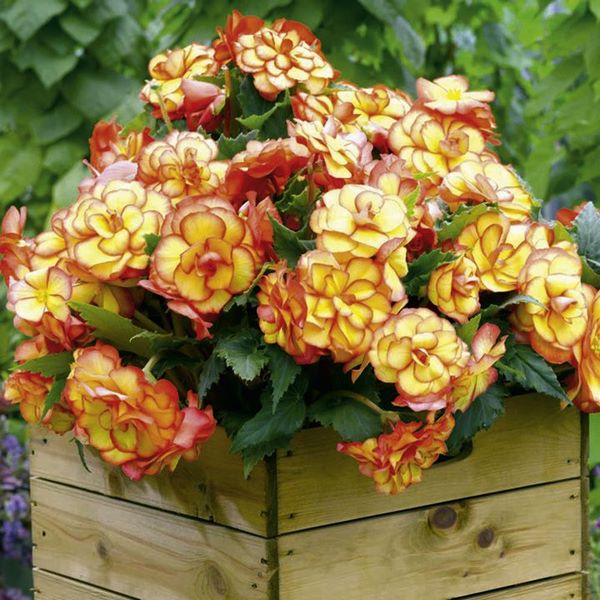 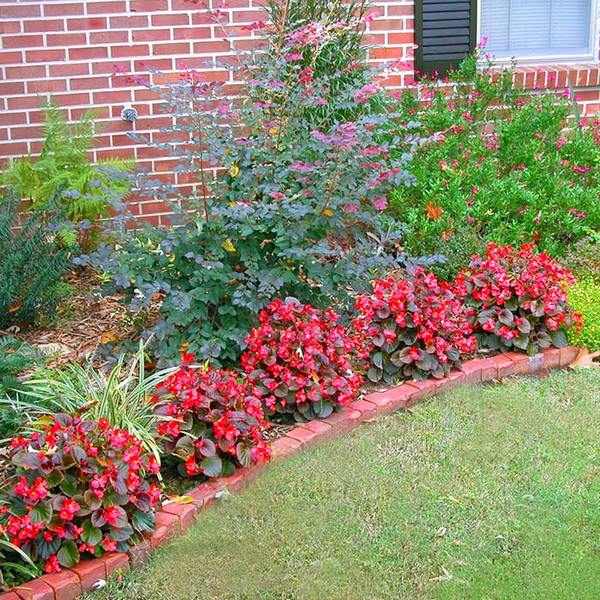 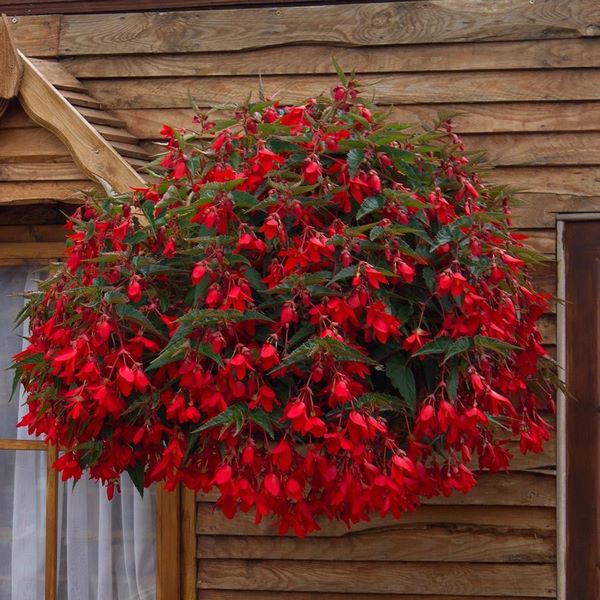 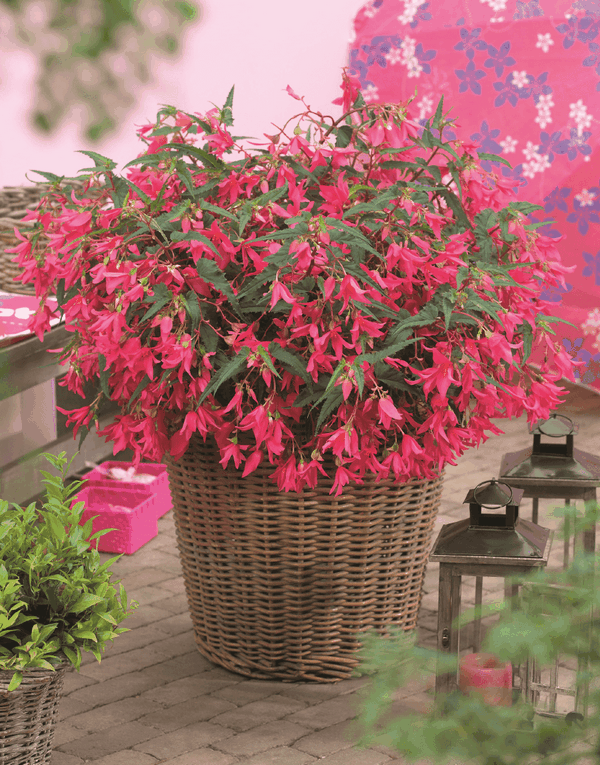 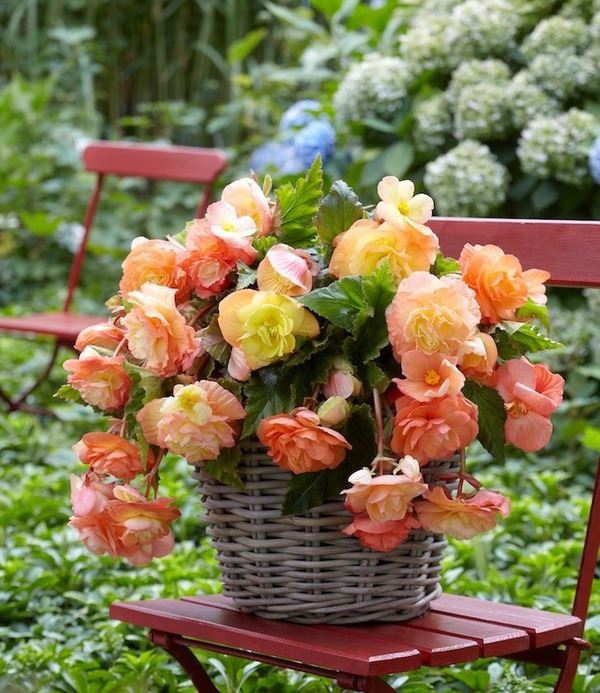 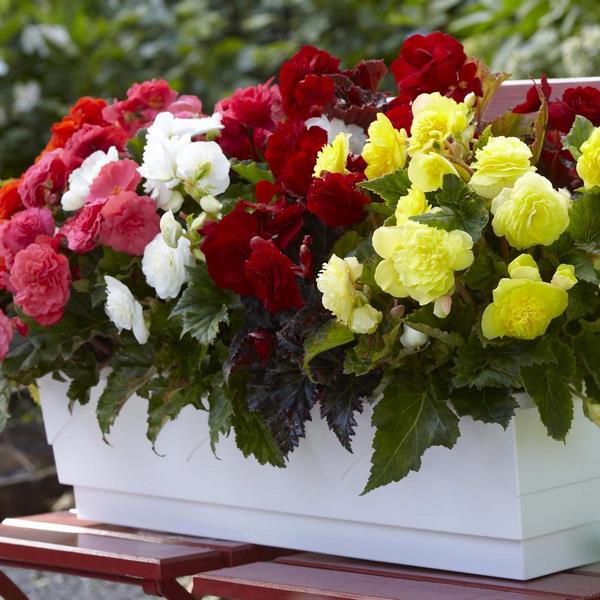 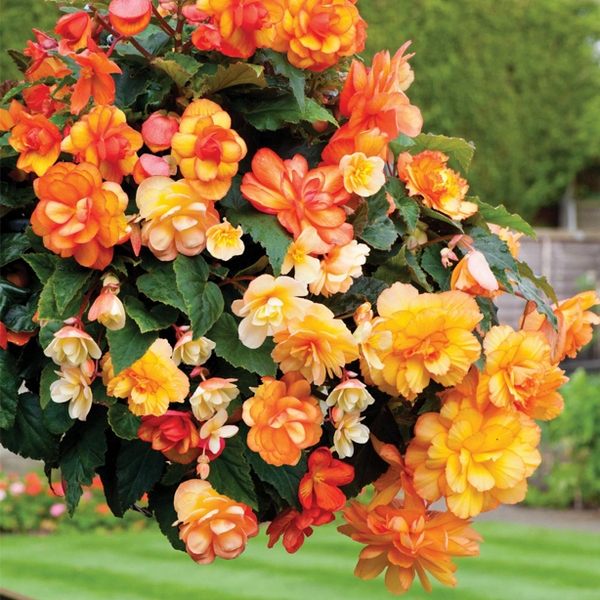 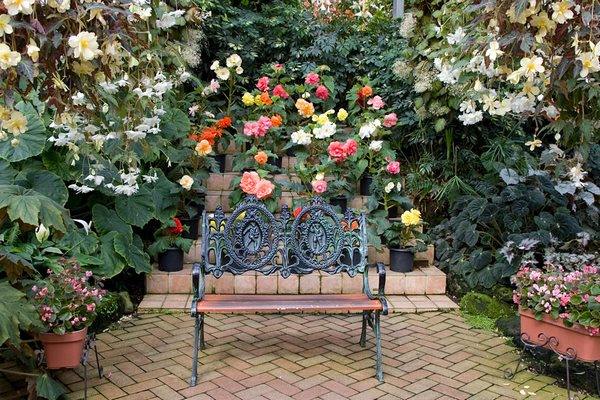 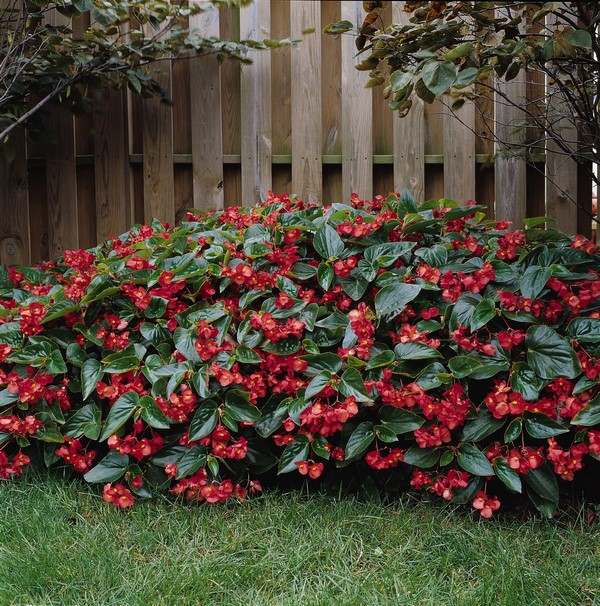 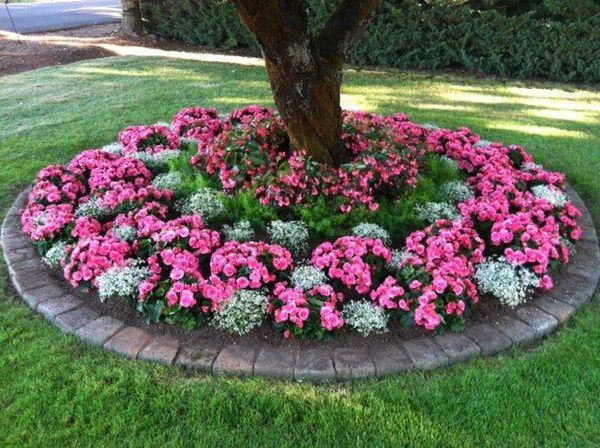 How to grow hyacinth – practical tips for beginner gardeners

How to grow hyacinth – practical tips for beginner gardeners
Next article

How to choose terrarium plants and arrange beautiful compositions? 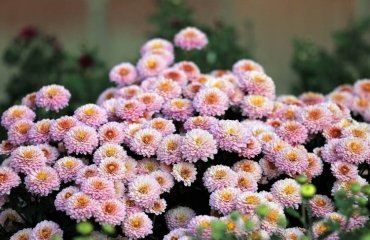 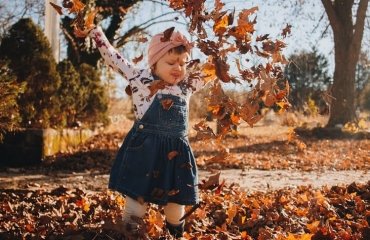 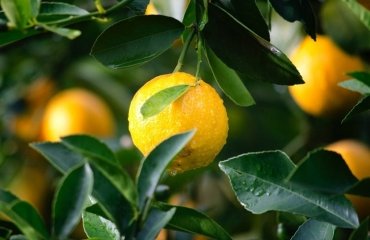 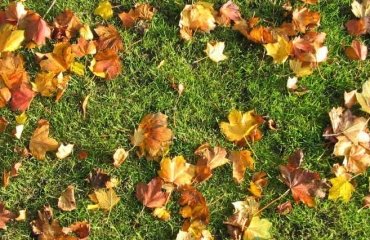 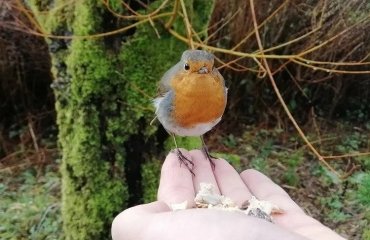 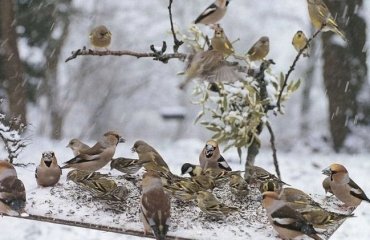