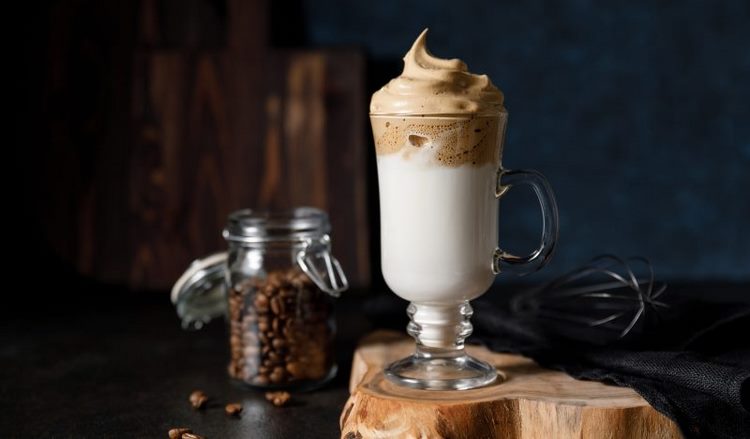 How to make Dalgona coffee? Have you tried the latest hot culinary trend? You may have seen it on social networks as this is the latest craze which appeared as a result of social isolation. The whipped coffee has become one of the sensational drinks that can be prepared at home. Photos with hashtag “dalgonacoffee” are often featured on Instagram as an image of a Korean drink. What is Dalgona coffee, how to make it, how to flavor it? We shall give you recipes and instructions to prepare it at home!

Dalgona coffee is a coffee drink from South Korea based on instant coffee, sugar, hot water and milk. It is believed that the recipe originates from India and only recently migrated to Korea. Over the past weeks, the process of preparing the whipped coffee drink managed to capture the top places in the world video charts – YouTube, TikTok, and Instagram.

Due to the resemblance in taste and appearance, this delicacy was named after Korean sponge candy called Dalgona which is also known as Honeycomb Toffee, Sea Foam candy. Often referred to as “quarantine drink” or “quarantine coffee”, the fact is that this is a delicious drink and you should try it. Actually, this is not a new invention. Variations of Dalgona coffee could be found in many countries. In greece whipped coffee is called frappe or Greek iced coffee, in India – Phenti hui coffee, which is served in the form of a cappuccino with hand-crushed ice.

How to make Dalgona coffee – proportions and ingredients 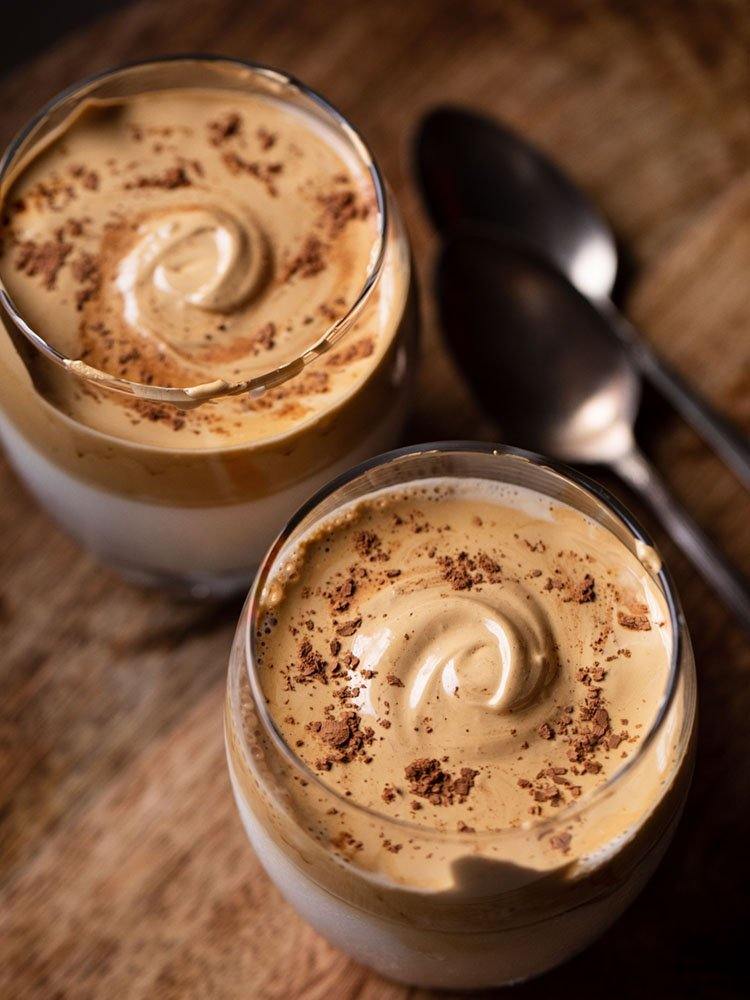 Dalgona coffee recipe is quite affordable. The drink consists of only four ingredients that almost everyone has available at home – it is instant coffee, sugar, water and milk. The first three components are mixed in equal amounts, in a ratio of 1: 1: 1. And the only difficulty that you have to face is whipping time. If possible, use a mixer. If you want to beat with a whisk, it will take about 5-7 minutes, or, as the Koreans themselves joke, 400 turns of the whisk!

With the huge popularity of whipped coffee, many variations appeared. While the original recipe calls for granulated sugar, you can use brown sugar, raw sugar or coconut sugar, depending on your personal preferences.

The drink is presented both in warm and in cold form. In the first case, warmed milk is added, in the second – cold, with ice cubes in addition. You can substitute milk with vegan milk varieties – coconut milk, soy milk, almond milk or other.

As a rule, Dalgona coffee is served in a glass cup so that you can see how a layer of whipped coffee foam gently lies on the surface of the milk. 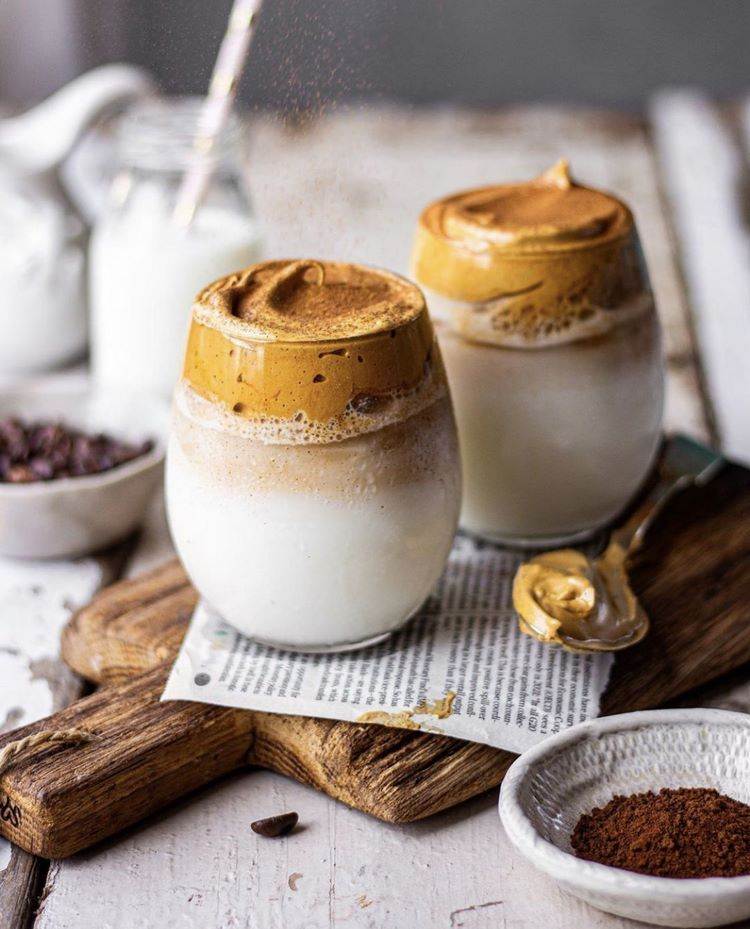 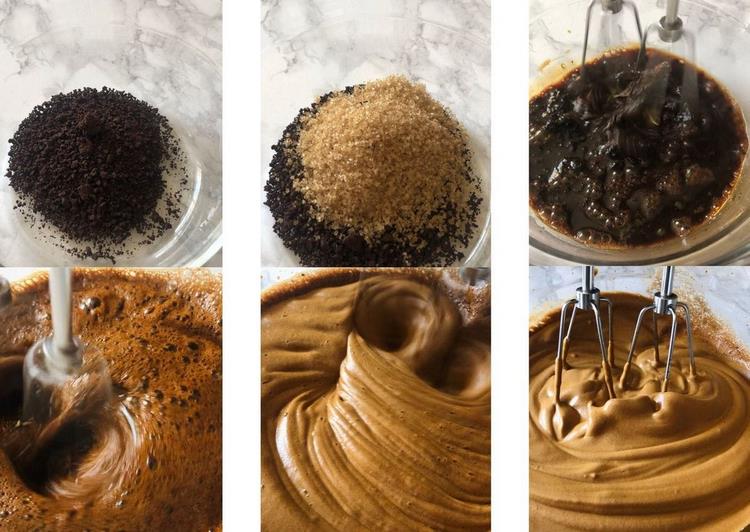 Add the instant coffee, sugar, and hot water into a cup, and mix them well.

Then, using a whisk or a mixer, whip them until a rich, thick and creamy mixture.

Add milk and ice in a glass.

Top the milk with the foamy coffee mix. 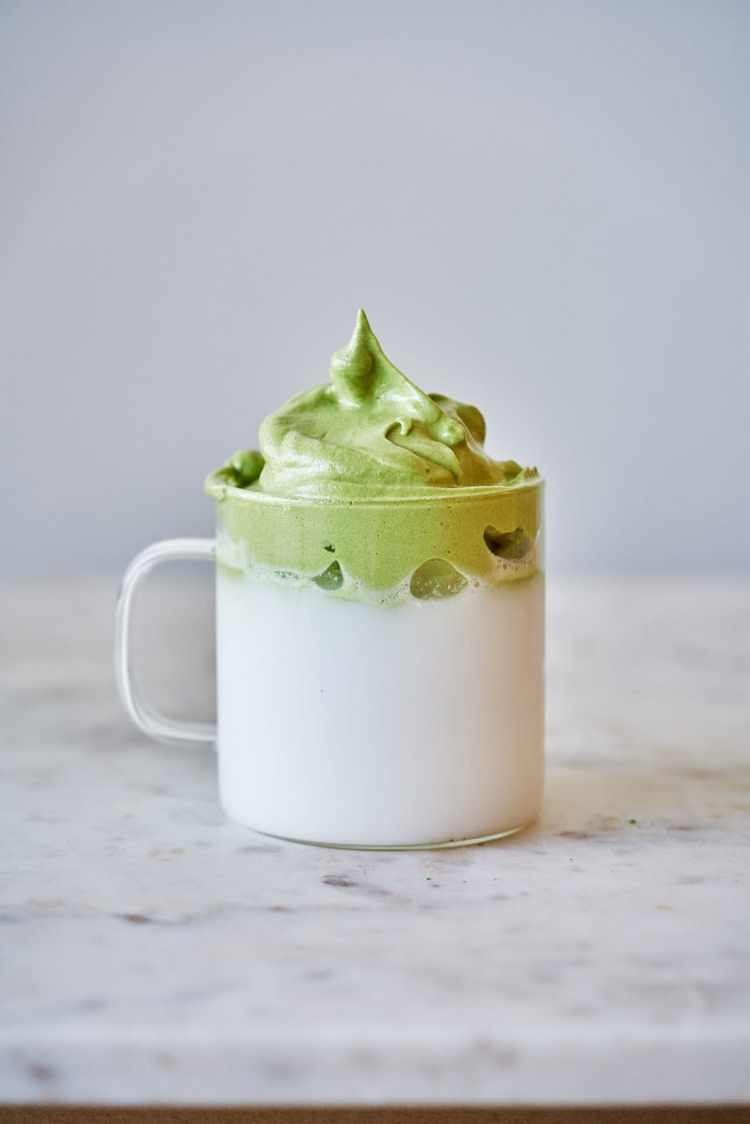 Add the boiling water to a medium sized bowl. Sift the matcha over the water. Use a whisk to combine the matcha and water until a thin, green paste forms.

Add the sugar and cream to the matcha mixture. Use a whisk to whisk by hand or an electric whisk to combine until the cream reaches a thick and creamy texture. Set aside.

Add the ice and milk to a glass. Make sure it is 2/3rds full.

Spoon the whipped matcha over the milk. 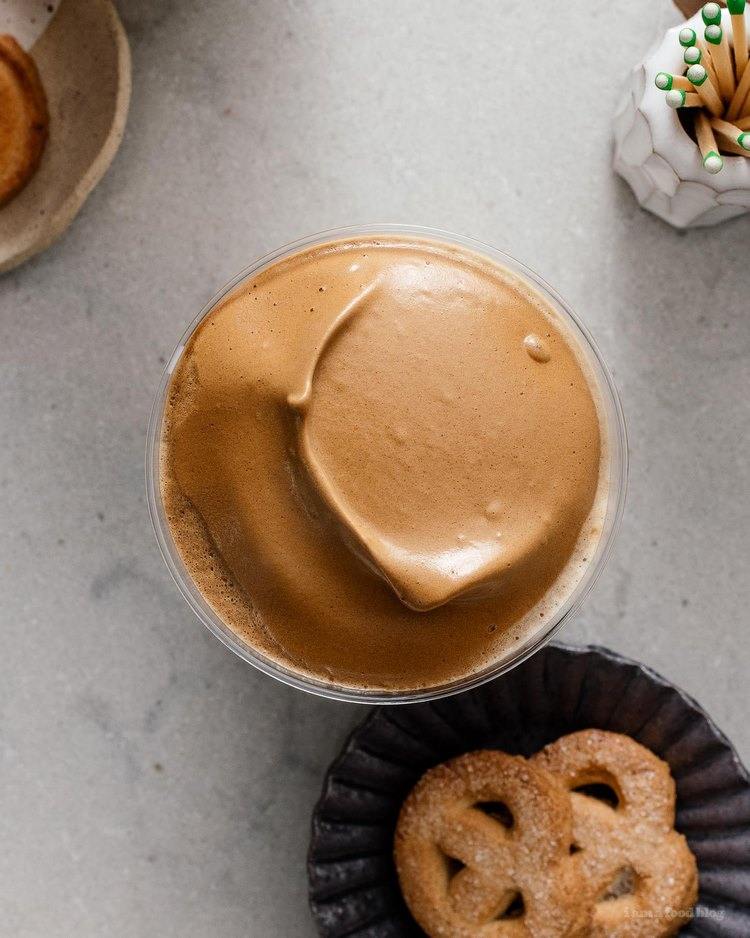 For the coffee layer:

Sift in the cocoa powder and whip for another 2 minutes, or until soft peaks form.

Add instant coffee, hot water and 1 tbsp of sugar into a cup and mix until sugar is completely dissolved.

Add ice and then slowly pour in the milk to achieve layers of coffee and milk. If you want a warm latte, omit the ice.

Top with whipped chocolate and serve. 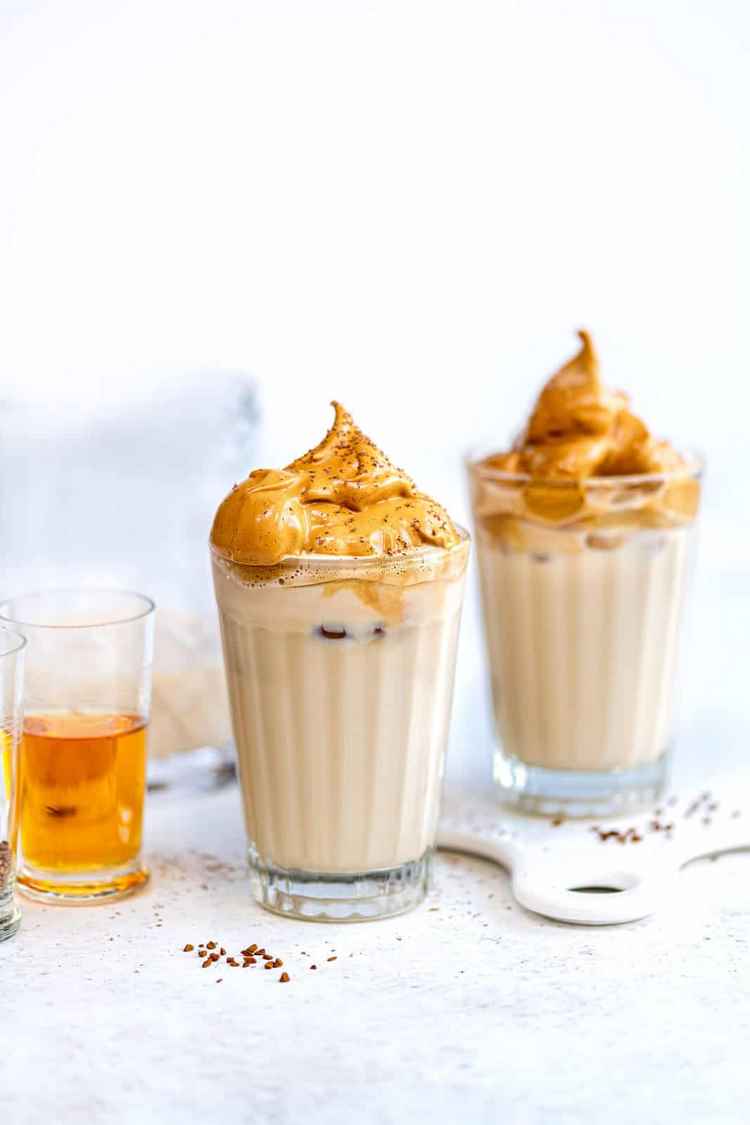 Put the granulated coffee and sugar in a small deep bowl. Add hot water and stir together to combine.

Strain into two glasses filling about ¾ of the way up.

Spoon a generous amount of whipped coffee over the milk.

Garnish with chocolate shavings or a dusting of cinnamon or nutmeg.

Savory waffles recipes – a must have breakfast ideas

Savory waffles recipes – a must have breakfast ideas
Next article

Grissini Recipe – How to make crispy Italian breadsticks at home 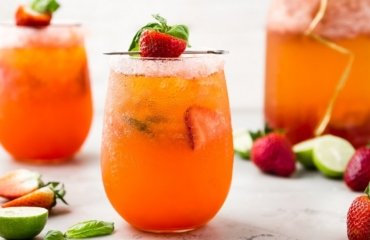 Summer Drinks 2022: Strawberry cocktail recipes for your next party! 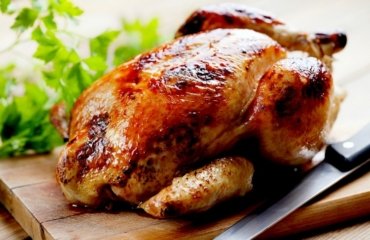 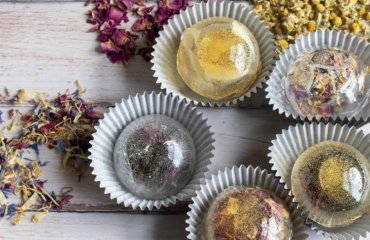 How to Make Hot Tea Bombs and Enjoy the Latest Gourmet Trend? 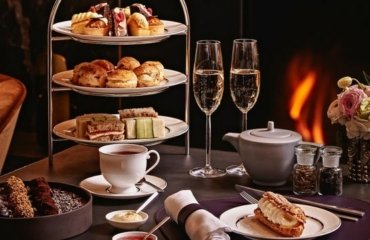 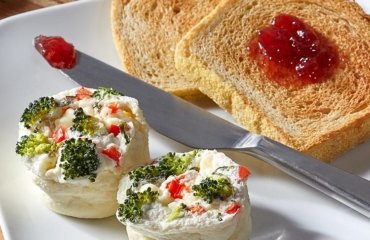 Egg White Bites – 4 Recipes for A Healthy Breakfast or Snack 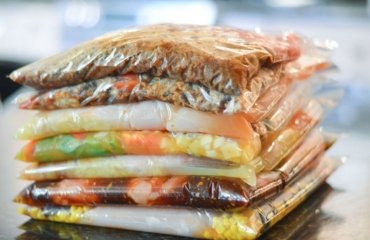