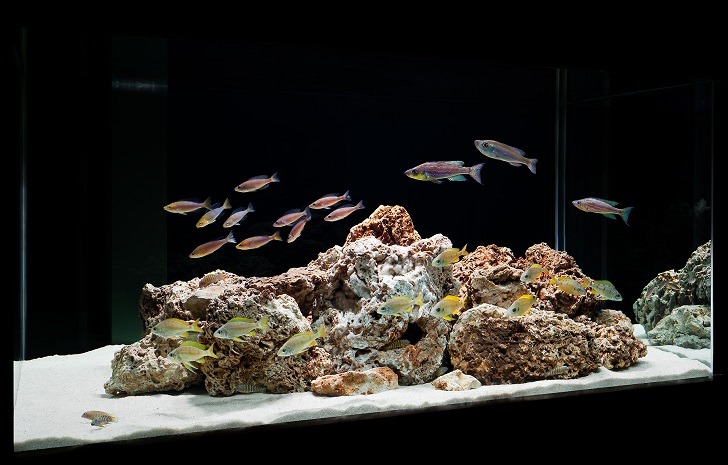 Aquascaping styles are constantly developing and the designs are not only incredibly beautiful to look at, but are also a form of intellectual art combining the imagination and the ideas of their authors and the ability to create a viable biological system. The simple definition of aquascaping is that this is a technique for arranging plants and rocks in an aquarium in order to arrange colorful fantastic gardens or landscapes. Whichever definition you prefer, the truth is that aquascaping projects involve not only imagination, but complex technical means and follow to certain rules of composition and construction. Like with any art, aquascapes can be designed in different styles and those of you who would like to start their first project should consider the right combination of natural forms, colors, textures, and all the details located in the aquarium. You need to get acquainted with the basic elements and the rules of perspective, how to set a focal point, how to use rocks, wood, plants and fish to create a balanced system with an attractive appearance. It is necessary to control the chemical parameters of water and soil, use proper lighting, not to mention the filtration and saturation of water with carbon dioxide. Since we already discussed the basics of aquascaping, we would like to focus your attention on the design styles and the mistakes that you should avoid when designing your landscape.

What are the most popular Aquascaping styles?

Aquascapes developed with time and nowadays there are different design styles which differ in appearance as well as the type of materials used. Each style has variations and it is entirely a matter of personal taste what type you enjoy the most. Here are 12 of the most popular aquascaping styles: 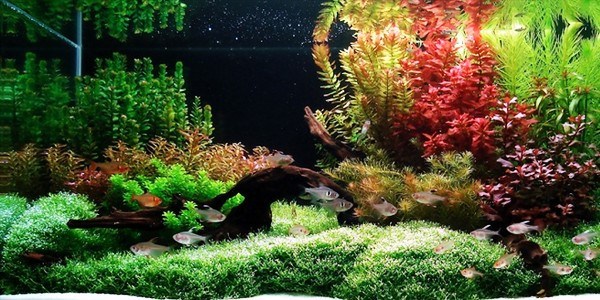 Dutch style in aquascaping is characterized by using many plants with different leaves. One of the major features are the layers, also called “terraces” and known as “Dutch Streets”. Typically, Dutch style in aquascapes does not have hardscape and are focused on the arrangement of vibrant aquatic plants in groups that complement each other in shape, color and texture. A school of fish adds to the beauty of the design. The base of the aquarium is covered by carpet plants or low growing plants while the focal point is accented by a red (or large) plant. The whole design is about simplicity but the style does require good knowledge about aquatic plants. 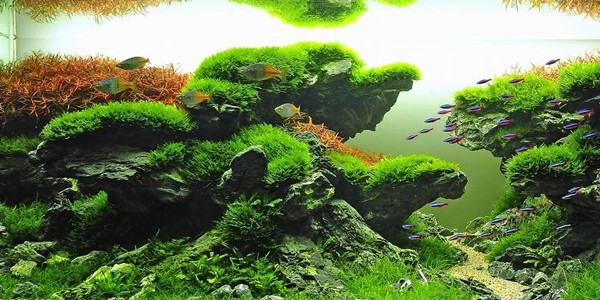 Taiwanese style, although not very popular compared to other styles, is aimed at creating an exact copy of the terrain and natural scenery. The most characteristic feature of these miniatures of reality is the attention to the smallest detail – paths, benches, buildings, etc. In such a composition it is allowed to use such decor elements as small houses, little men and various figurines which create the idea of “life”. 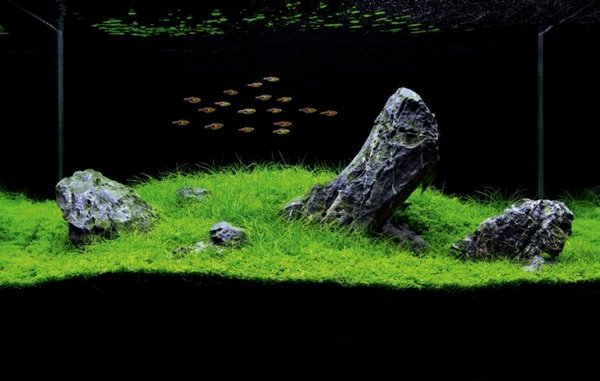 Iwagumi style is one of the most popular aquascaping styles and considered as one of the most difficult to arrange and maintain. Takashi Amano, who is considered to be the father of modern aquascaping, made this style popular and the Aquascapes are based on building a structure of carefully positioned stones arranged according to the Golden Ratio, or Rule of Thirds. In Japanese, Iwagumi means “rock formation”. 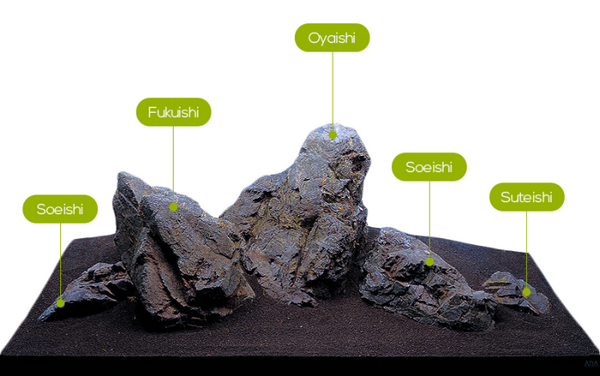 The aquascape design may imitate a natural landscape but the number of elements in the aquarium should be kept to a minimum. The limited colors, both in plants, stone and hardscape, create a minimalist impression often resembling a Zen garden. The most important to know is that the number of stones should always be odd – whether three or more, and the largest one (the father stone) is the main stone which is also the focal point, while the other ones are secondary and contribute to the composition. Usually the stones have similar color and structure which gives the composition a sense of harmony and unity. Nano fish will add to the scale and to the feeling of tranquility but keep in mind that the effect of minimalism is achieved by using limited number of flora (mainly low growing plants) and fauna. 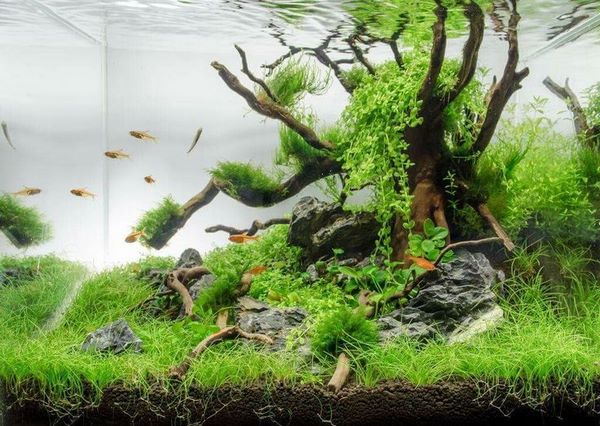 Biotope style resembles the real natural environment and the hardscape features a variety of stone, wood, driftwood, flora and fauna. Most often such aquascape designs are seen in museums and are especially attractive. Despite the fact that aquascapes in biotope style are known to be easy to arrange and maintain, you need to have a good knowledge of aquatic plants and fauna as you have to choose the right varieties to exist together in harmony in your aquarium. 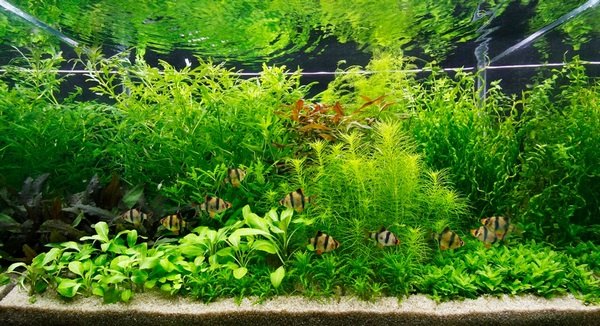 Jungle style aquascapes, as the name suggests, imitate a jungle. This style is considered to be the easiest as there is no limit to flora, fauna and hardscape so you can be really creative and use your fantasy and imagination. Keep in mind that the jungle designs look best in big aquariums due to the multiple aquatic plant species and great variety of fish. Jungle style aquaria are popular as they require relatively low maintenance and the vegetation becomes extremely dense. 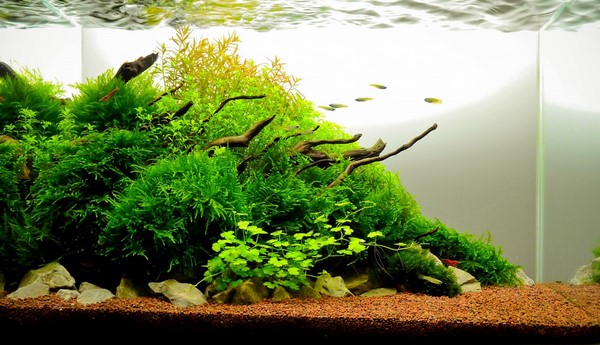 Nature aquascapes are the most spectacular and breathtaking designs. As the name implies, the natural style most often depicts miniature versions of tropical forests, as well as mountains, hills and valleys. This aquascape style was introduced by Takashi Amano in 1990s and was influenced by the magnificent Japanese garden designs. Hardscape materials, wood, stone, etc., and plants play an equally important role in seeking balance in the aquarium. The goal is to achieve a naturally looking, balanced and harmonic ecosystem. Obviously, such aquascape designs require regular maintenance. The style has many sub-styles and each one has its own rules, for example – the ‘island’ type design or the triangular type, etc. 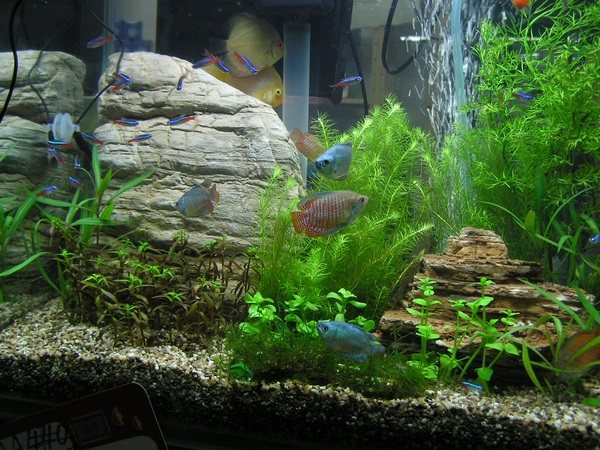 Walstad aquascapes were first introduced by Diana Walstad and although they resemble natural or biotope styles, the main goal of this method is to recreate a completely natural ecosystem. Hardscape and plants are placed randomly which makes the visual appeal and beauty of the aquarium a secondary task. 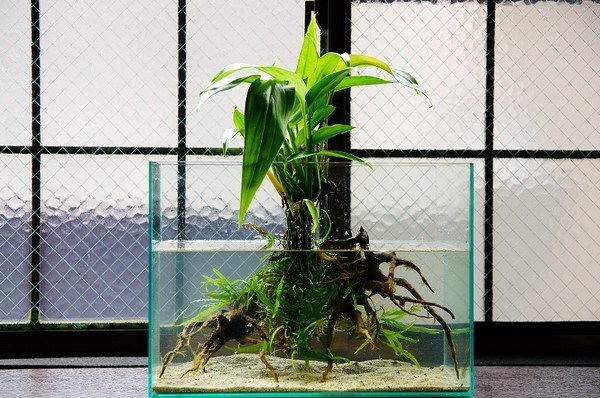 Wabi-kusa style originates from Japan and was first introduced by Japanese aquascapers. The style focuses on finding beauty in the simple elegance of plants, in imperfections and even in a slightly chaotic design. Wabi-kusa aquascape designs are based on a ball of substrate placed in a small container and covered with plants. The plants are growing naturally and the overall impression is of a submersed/emersed garden, i.e. half the design is under water while the other half is above water level, resembling an island. One of the characteristics of wabi-kusa is that hardscape is not a common feature. Of course, if you have decided to arrange an aquarium in this style, you can add rocks, stones or wood but you should arrange them in a way that looks natural and not staged. Do not forget that you need to have suitable lighting which will make sure that your plants will grow and thrive. Despite the fact that some people consider wabi-kusa aquascapes to be chaotic these designs look stunningly and undeniably beautiful and captivating. Wabi-kusa aquascaping offers a number of advantages, especially to people who are on a budget. These designs are cheaper as you do not need to buy a large aquarium – you can create your aquascape in a small size container. Another advantage is that your container will take up very little space, which makes it a great decorative element for living rooms, bedrooms, even offices. The style is an excellent option for beginners as it does not require an extensive experience in aquascaping. 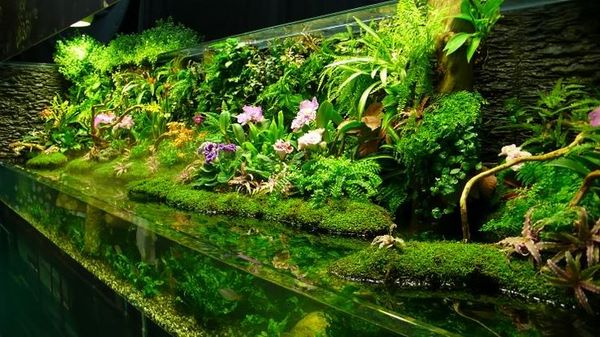 German style (Open style) aquascaping features emersed/ submersed designs and is also known as biotype or a type of paludarium. Paludarium is a type of vivarium which combines terrestrial and aquatic elements and often the setup features aquatic plants which grow submerged and plants that grow emerging outside the aquarium resembling a rainforest, jungle, a river bank, etc. Most often this style is chosen for small aquariums or nano-aquariums and the style gets its name as biotopes were first introduced in that region.

Zen garden aquascapes recreate the feeling of peace and tranquility and often are compared with Nature style aquascape designs which, actually, took and developed the Zen style. Zen aquariums are incredibly attractive and graceful, and all elements – aquatic plants and hardscapes – are set in a way to form a natural layout following the principles of Japanese Zen garden landscaping like the positioning of rocks. For example, Iwagumi based aquascapes with three stones use this technique. Despite the simplicity, zen aquascapes are very sophisticated and a real pleasure to look at. 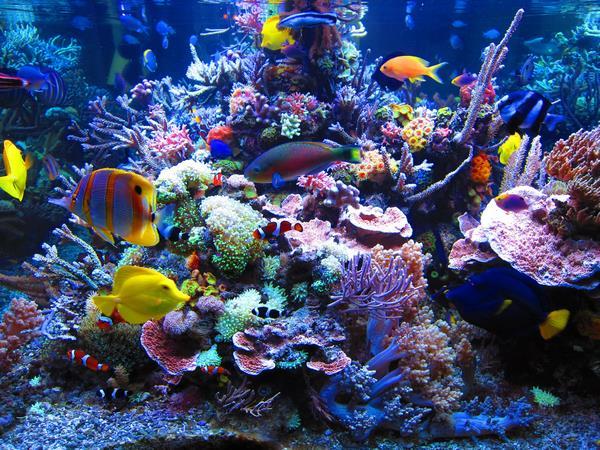 Salt water aquascapes, also called marine aquariums or reef aquariums, have some variations and can be arranged as a fish only, reef only, or fish and reef aquarium. This type of aquascaping is the most expensive as it requires special maintenance equipment, species of fish and reef. In addition, to create an aquarium that looks like a real coral reef and at the same time maintain a healthy environment for all inhabitants of the tank requires not only creativity and imagination, but extensive knowledge on reef flora and fauna. When you want to create a realistic and natural looking reef you need to do some careful planning and consider the size and height of the tank, the water flow, the species that you want to have in the aquarium, etc. It is a good idea to do some research and find out the specifics of natural reefs – how and where fish swims, what shelters and hides for the fish you need to arrange, what the corals need, etc. Think how to compose the design of your hardscape, how much rocks you will need to construct your aquarium, the height and weight of the rocks, etc. Of course, the rules of aquascaping design still apply – the goal is to create a focal point, perspective, visual depth and a balanced and harmonious appearance which pleases the eye of the viewer.

As a conclusion, whether you have chosen one aquascaping style or another, you need to remember that you have to be patent. Creating a beautiful aquascape is a process which takes time. It is best that you follow the basic rules, but the main thing is to convey your individual idea so you do not have to strictly follow the canons of a certain style. Aquascaping is all about imagination, creativity and inspiration and it is worth being patient and then enjoy the masterpiece of underwater art which you designed! 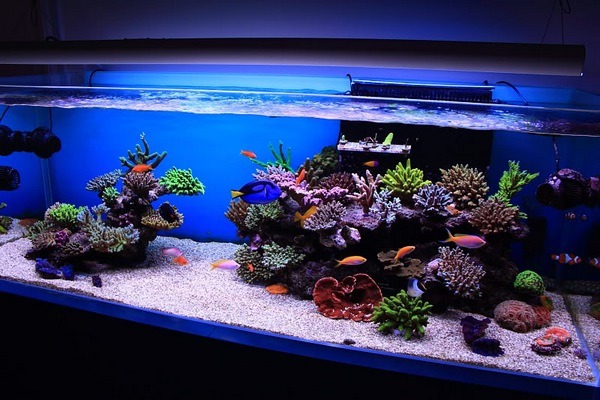 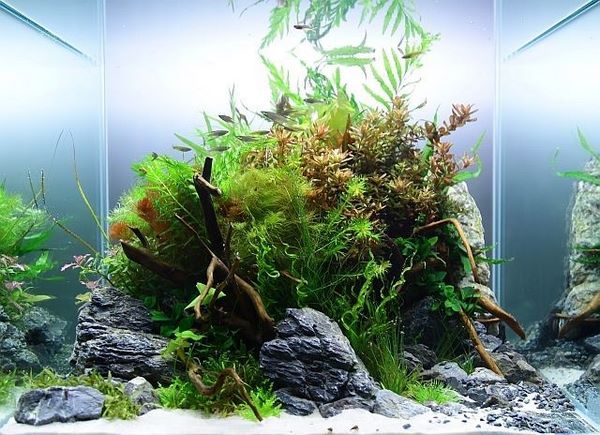 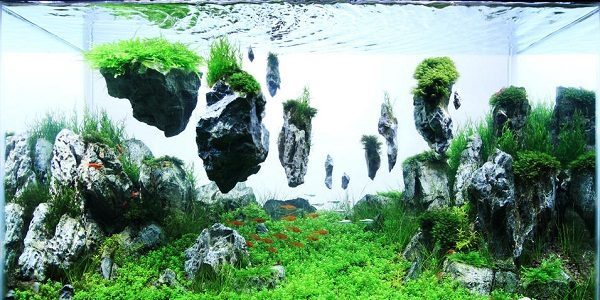 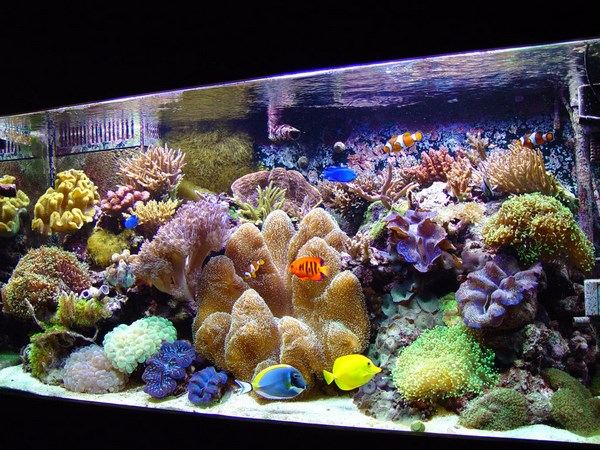 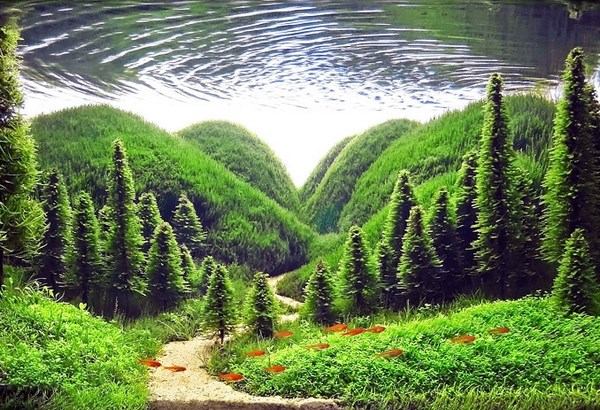 Aquascape – basic principles and elements of landscaping under water

Aquascape – basic principles and elements of landscaping under water
Next article

How to choose plants for aquascapes – beginners’ guide 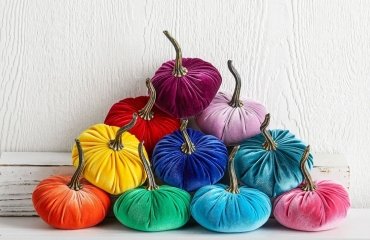 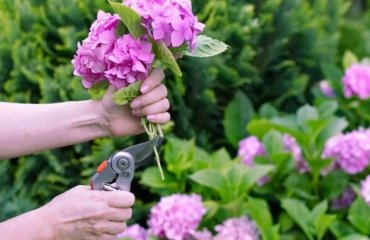 DIY decoration with hydrangeas: How can you display the flowers of the magnificent plant in the house? 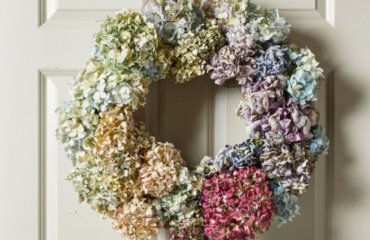 How to dry hydrangeas without losing their color and make a beautiful flower arrangement? 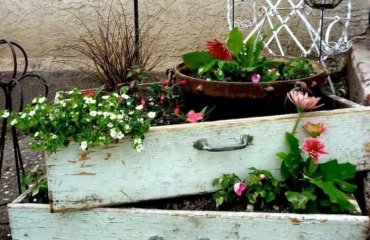 DIY bike rack for the garden: ideas for cheap bike racks made from upcycled materials 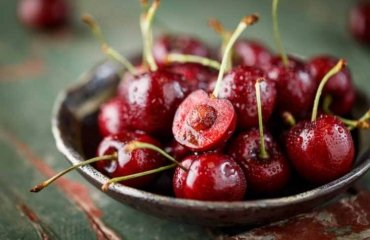 What to do with cherry pits? Here are 5 smart tips to reuse them!