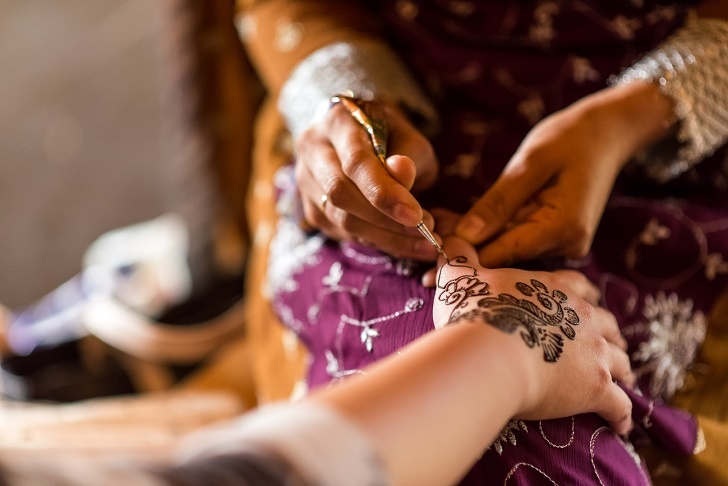 We will show you a special selection of easy mehndi designs for beginners which will be useful to all of you who are willing to try it for the first time. However, we have to start by giving answers to some questions. What is mehndi? Is it just an unusual decoration, or a drawing bearing a certain deep message? Why this art is considered an integral tradition in a number of countries? What is the mystery? 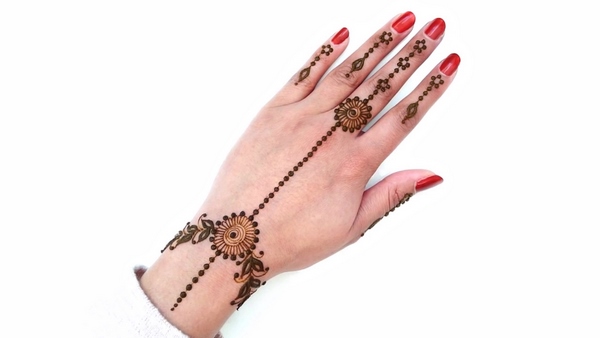 Mehndi is an art coming to us from antiquity and it is difficult to say where exactly this art was born. Its origins can be traced back to ancient Egypt, where unique henna drawings were applied to the bodies of noble women. There is an opinion that mehndi comes from India but this technique of painting appeared in the country in the XII century. Nevertheless, nowadays mehndi art is inevitably associated with Indian culture and traditions.

Mehndi is the art of painting the body with henna, which came to us from antiquity which, unlike a tattoo, it is a temporary decoration and lasts from 2 to 4 weeks and does not cause any harm to health. It is harmless and if you wish, you can apply different drawings each time, since there are unlimited options. Mehndi can be applied to different parts of the body and designs are very different – flowers, dots, curls, waves, animal images and other elements form intricate patterns that can decorate women’s hands, foot, shoulders and other parts of the body. The most popular type is mehndi on hands and it is typical for women in India, Malaysia, Arab countries, North Africa, Indonesia. In European countries for a long time the art of mehndi was denied. Perhaps this was due to the negative attitude of Christianity to the “pleasures of the flesh” but today the situation is drastically changing and even celebrities paint their bodies with henna. Hollywood stars appear in public with original drawings on the body, wanting to emphasize their individuality and unusual taste. 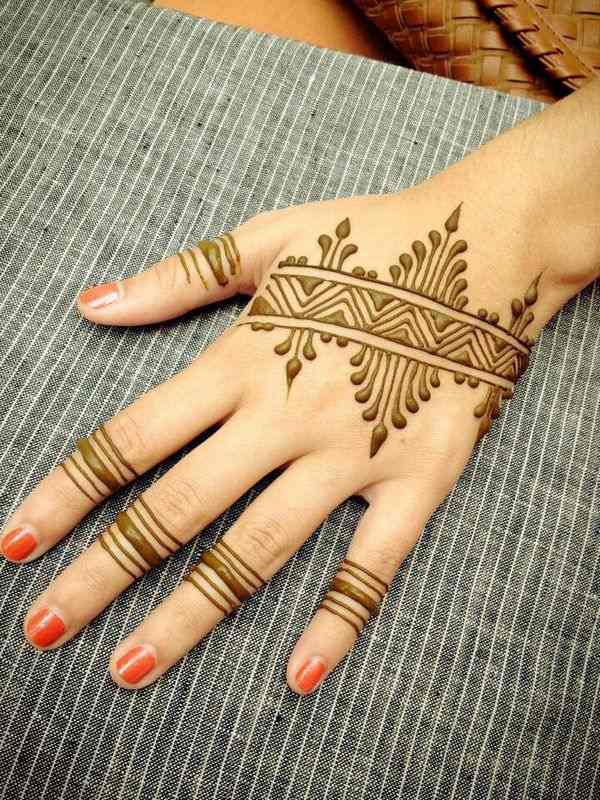 To some, mehndi designs are a tradition, to some – a true talisman, and to someone – a tribute to fashion and a way of self-expression. There are many amazing manifestations of national culture in the world. One of the most mysterious, filigree, subtle and endlessly fine arts is mehndi drawing. The fact that these designs are amazingly beautiful and this is an art worth of genuine admiration is beyond any doubt. Nowadays, this style and way of decorating your body is practiced not only in the countries of the East, but also in Europe and the United States. In order to create a real masterpiece, you need skills in art, understanding the meaning of symbols and the main material – henna for mehndi.

We have to pay special attention to henna for mehndi. Henna is a dye obtained from the leaves of the Hina tree (Lawsonia inermis), also known as henna tree, mignonette tree and Egyptian privet. It grows in many countries of the Middle East and North Africa, as it prefers a hot and dry climate. The tree is found mainly on the island of Sri Lanka, in Pakistan, India, Nepal, Sudan, Iran, Egypt as well as in the south of China. The leaves are dried and ground to powder. It can be stored up to six months and does not lose its properties. The powder is used to make paste and it is applied to the body. Different ingredients can be added to the paste to give it a certain color or special properties – coffee, ash, lemon juice, etc. It is important to know that henna is a natural antiseptic and is absolutely safe for health. The color of natural henna is exceptionally brown.

Styles and advantages of mehndi designs 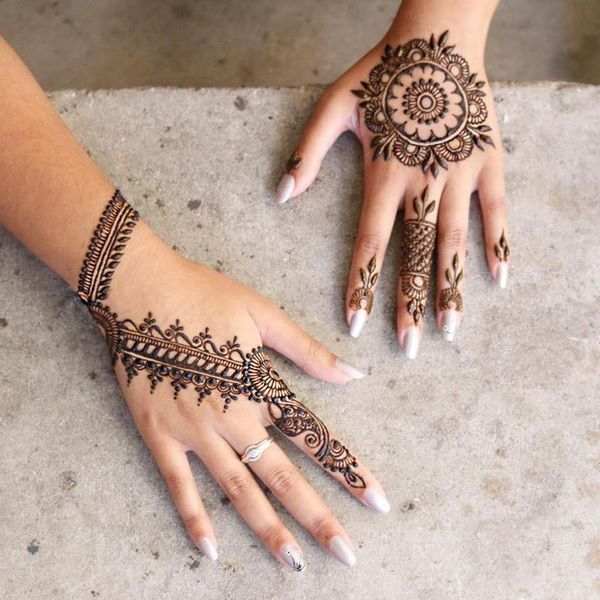 There are several styles of mehndi – Indian, North African, Arabian and Asian styles. For example, the North African henna designs differ from the others in the geometric patterns and the strict lines. In addition, people in North Africa sometimes prefer to simply dip their feet or hands into henna. This is because of the antiseptic properties of henna which are priceless in the heat. Arabic style features floral patterns but the Asian style is a kind of mixture of Arabic and Indian styles.

What are the advantages of mehndi designs?

On the first place, this is a temporary tattoo and you have the chance to try different designs and patterns.

Since henna is a natural hypoallergenic substance, mehndi will not cause any harm, irritation and redness on the skin.

Using clever ornaments and designs allows you to hide scars, pigment spots and other skin imperfections.

The process of applying mehndi does not cause any discomfort and pain.

Today mehndi is an original decoration with a sacred meaning. You can have a body decoration on a variety of occasions: bridal showers, parties, weddings, birthdays, themed parties, etc.

How to apply mehndi?

Masters of mehndi apply patterns to the body using a stick made of metal or wood, a brush or a special tube containing the henna paste. The actual application process can be carried out either by hand or using a stencil prepared in advance. Here are some simple rules that you need to follow:

If you plan to apply the pattern by yourself, choose a simple design. It is a good idea to start with a simple pattern and practice on a sheet of paper before applying the henna paste on your skin.

Remove the hairs, wash the desired place with soap thoroughly and then wipe with a degreaser. For best effect, it is worth rubbing eucalyptus oil in place of the future tattoo.

Draw the sketch on the skin with a pencil or pen. There are special pencils with which you can draw a contour of the future tattoo. Once you get more experienced you may skip this step.

This is the most difficult stage – drawing with henna. Henna can be in a special tube and you have to cut off the tip. Slightly pressing, you can draw as with a conventional marker. After cutting the tip, first try to squeeze henna on paper to determine how hard you should press on the tube. If you go behind the contour, then immediately remove the excess of henna with moist cotton swabs.

When henna is applied, you need to wait 6-8 hours until the pattern dries. It is better not to water the painting and allow the crust peel away by itself. When the paste is completely dry, you can sprinkle it with lemon juice which will allow your mehndi last longer. Make sure you do not get engaged in intense sports, do not take hot baths or a shower before the mehndi has dried completely. The color of henna will become darker in a day or two after its application, so do not be afraid that initially the patterns will have a pale reddish color.

How long mehndi lasts and how to properly care for the drawing on the body?

Mehndi can last on the skin from a week to a month. This depends on the skin area on which the painting is applies, the frequency of water contacting the image and the intensity of paste color. It is believed that white and black mixtures are washed away faster. To make sure your mehndi design lasts as long as possible you need to keep in mind the following considerations:

Before applying mehndi it is advisable to perform depilation and pilling of the skin areas that you want to decorate with henna patterns. The tattoo will look more beautiful and will last longer on smooth skin.

After the drawing is done, try to avoid getting water on this area of the skin. That is why it is best to do mehndi in the evening and go to bed without taking a bath or a shower before going to bed.

To fix the pattern, you can rub special mehndi oil into it – almond, sesame or mustard. It is advisable to wipe the pattern before any water procedures with the same oil.

While taking a bath or shower it is best not to soak and not to rub the pattern but simply rinse the place with water.

It is quite popular to apply mehndi tattoos before going on vacation. Keep in mind that henna is quickly washed off in the first days after its application by salt water.

Intensive sweating also helps to shorten the “lifetime” of mehndi. 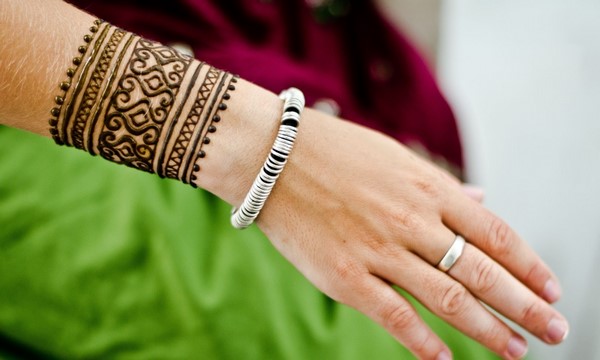 Mehndi is not just an original decoration. The pattern on the body can become a real talisman, a symbol of desired accomplishments, a ritual sign. For example, in India, the bride’s body is painted with intricate patterns, and the remaining henna is buried in the ground so that the marriage lasts and the husband is faithful and loving. In Morocco, pregnant women cover their ankles with drawings. They believe that this helps protect their unborn baby from an evil eye. The meaning of mehndi is very special. Different symbols applied to the body have a different effect. If, for example, you apply a painting with an elephant, then, according to the belief, a person should expect success, luck and prosperity. If you treat the painting as a talisman, then the tattoo will bring happiness to the person wearing it.

A lot of symbolic patterns and images are used in mehndi designs and each one has its own meaning and strength. Hinduists at all times believed that the symbolism of a drawing can have a protective character, attract wealth, success and love. Here are some of the most popular patterns and their meaning:

The combination of these or other symbols can be special. Knowing the meaning of the symbolism, you can tell without words about your desires or aspirations. One of the most popular patterns is a bracelet on the arm or on the legs where a certain meaning can be encoded as well, which symbolizes eternal love. 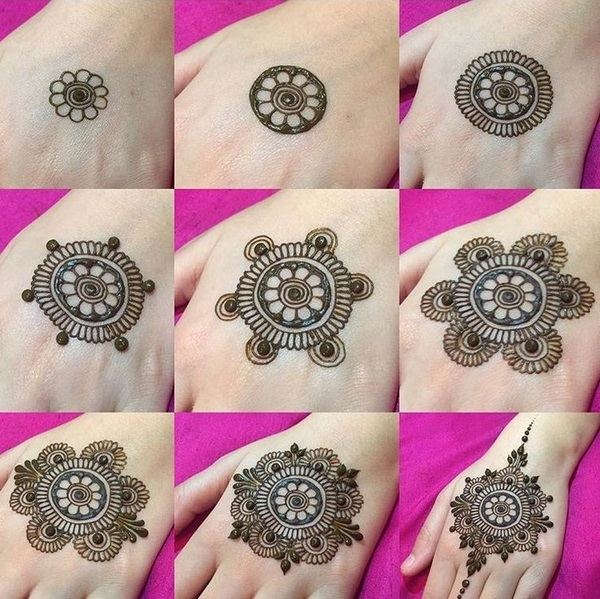 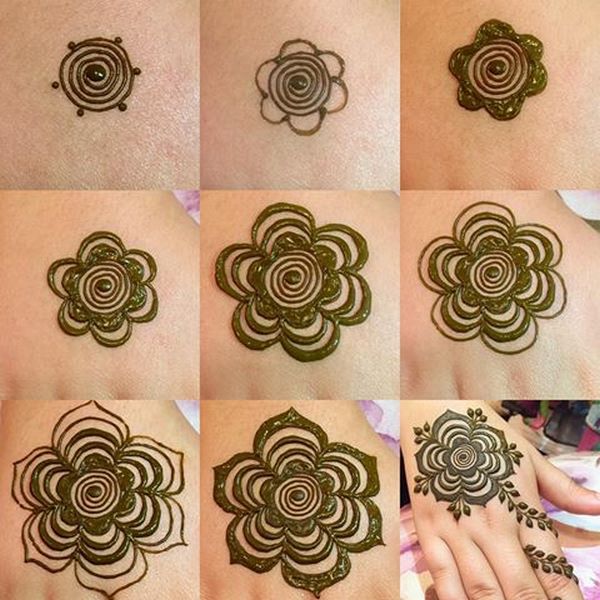 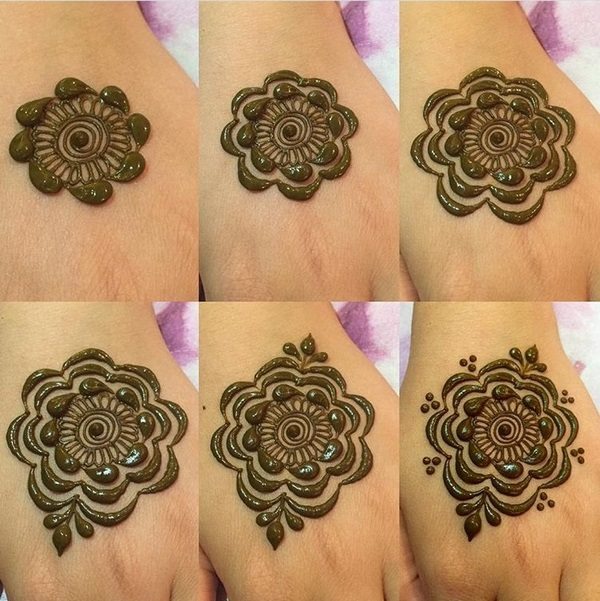 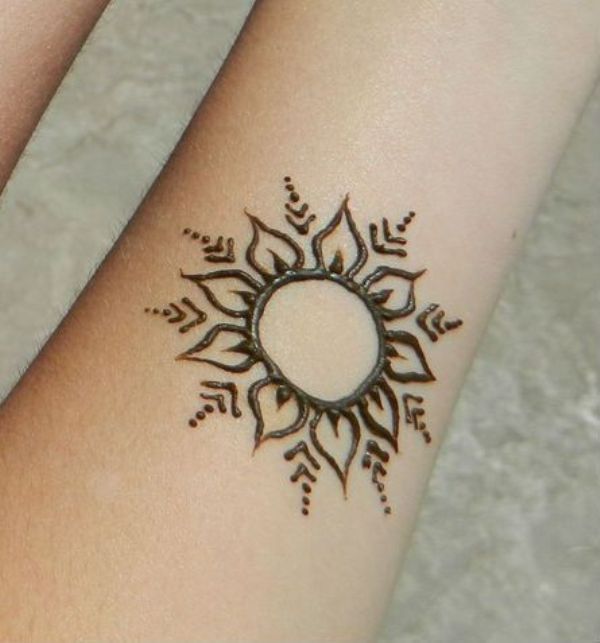 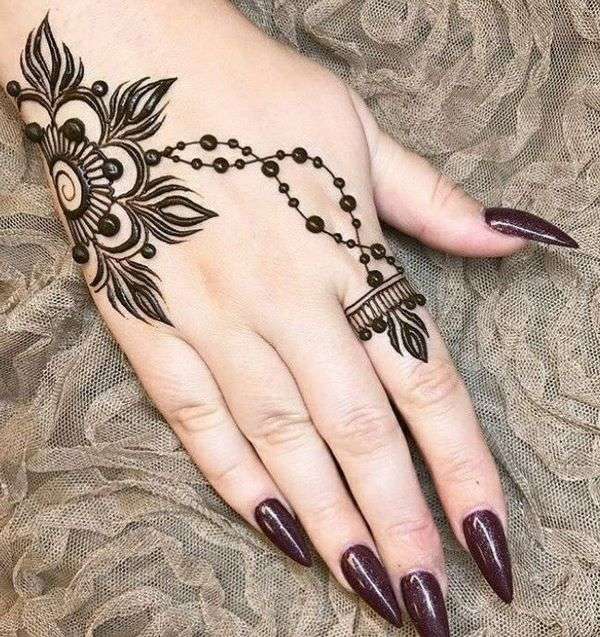 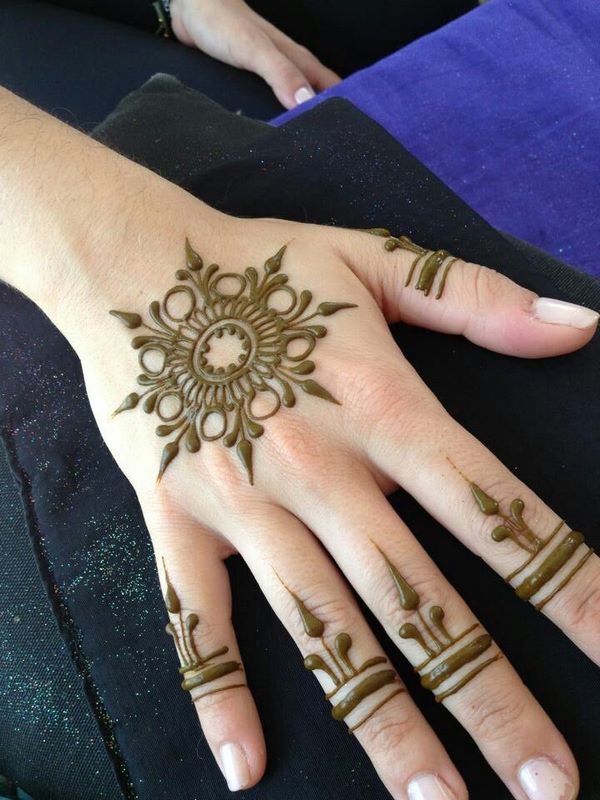 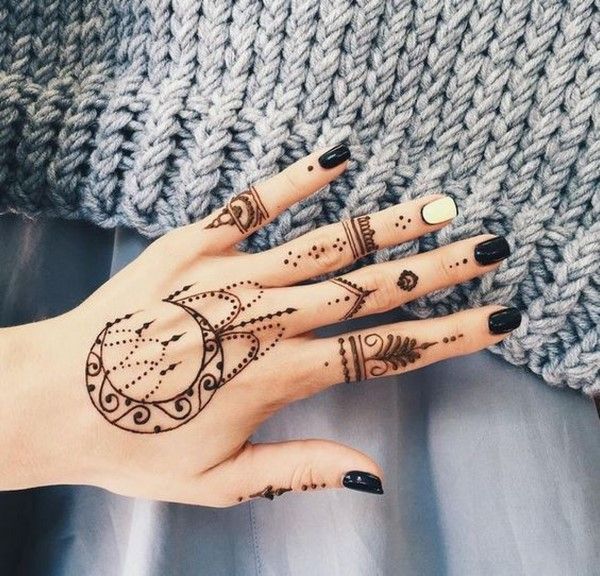 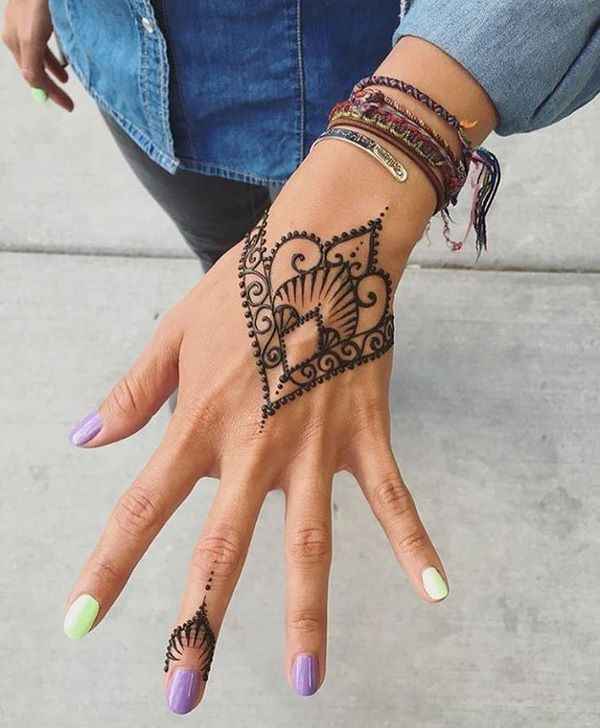 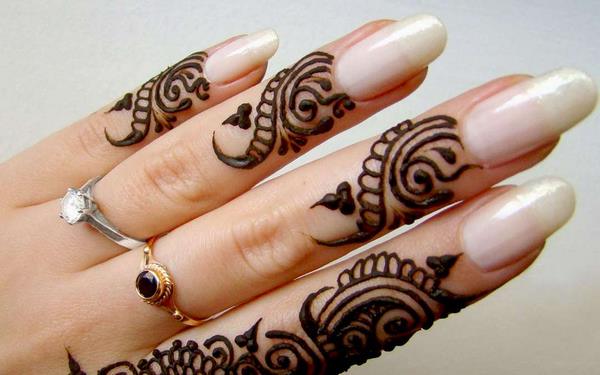 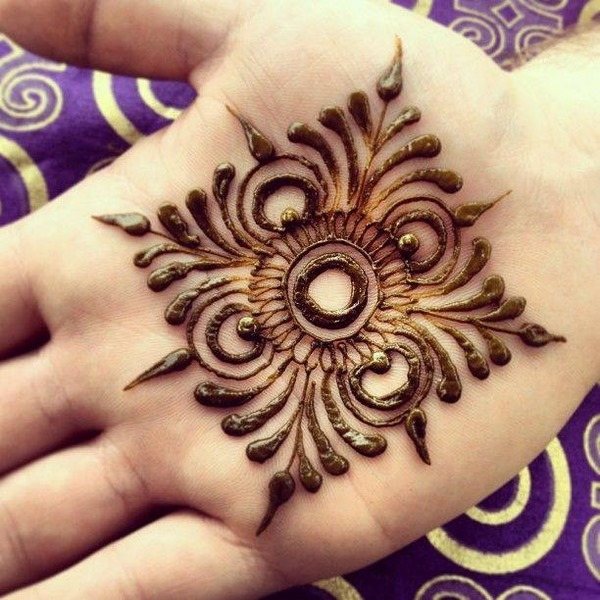 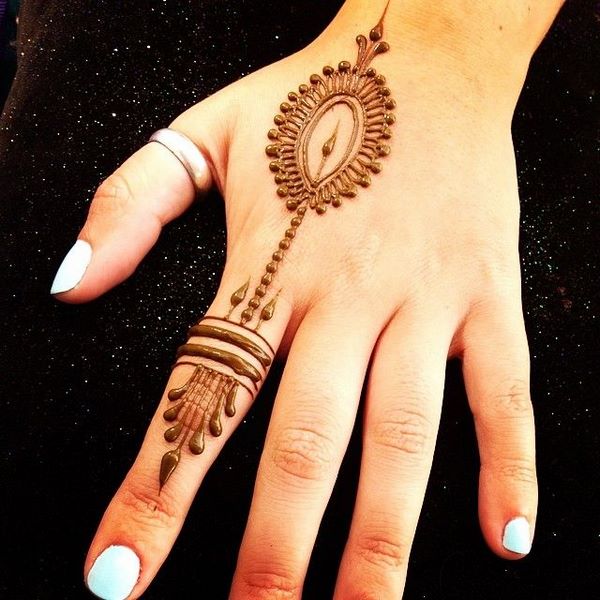 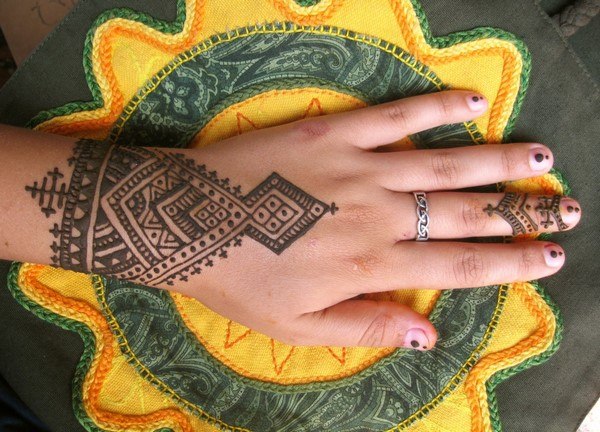 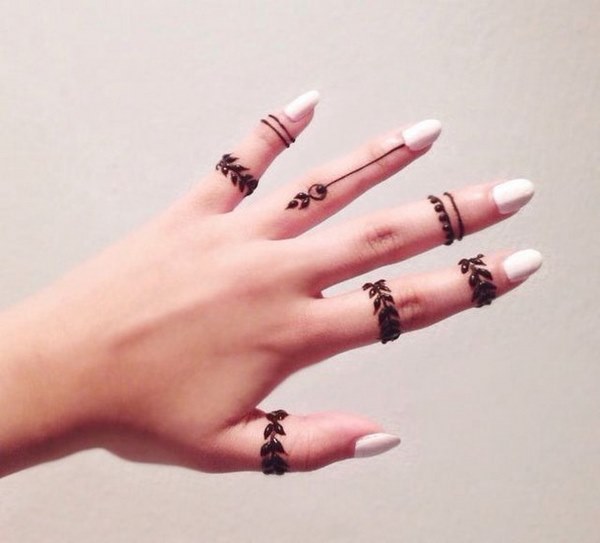 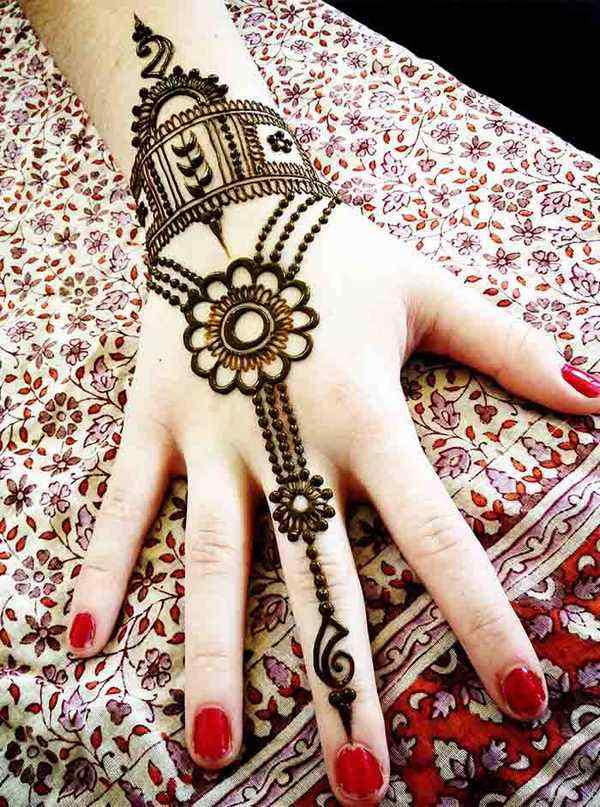 Exceptional flower tattoo design ideas for women of all age 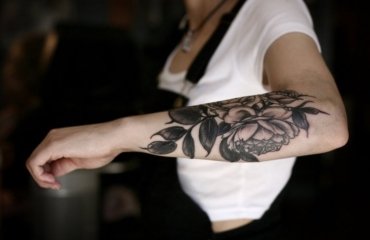